Home » Sport » Why supercoach Wayne Bennett will not go quietly

A decade ago, Wayne Bennett resigned from the Brisbane Broncos to take any decision about his future out of the club’s hands — and its owners, News Corp. 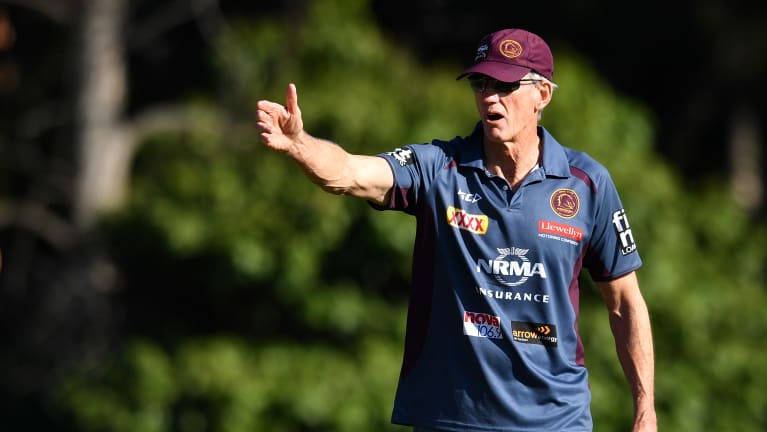 Wayne Bennett: The supercoach is being managed out of his club.

“I thought I would take the pressure off everybody, make it easy,” Bennett wrote in his book The Man in the Mirror. “Do what’s right and, most importantly, make sure the club didn’t turn on itself. Thankfully, there were no BRONCOS v WAYNE BENNETT headlines anywhere to be heard or read.”

When Bennett left the Broncos the first time, after 21 years, the cut was as clean as it gets in rugby league. This time, though, there’s already blood on the floor with much more haemorrhaging to come as Bennett gets managed out of the powerhouse club he created.

His future will be decided at a Broncos board meeting in October after the NRL finals series. He has one more year to run on his contract but there appears to be a snowball’s chance of him seeing it out.

Earlier this year, he had wanted an extension on his contract until at least 2020, giving him the chance to perhaps foster a younger coach, just as Don Furner had done with Bennett at Canberra in the 1980s.

It seemed like a logical plan. Another clean cut. Instead, the Broncos can’t push their six-time premiership-winning coach out the door quick enough.

Sniffing an opportunity and a dollar, Bennett is being shopped around to rival clubs by those who don’t manage him.

Gold Coast-based manager Chris Orr tried to sell him to the Titans recently and chairperson Rebecca Frizelle flatly rejected it.

Bennett didn’t start the talks but he also didn’t stop them from happening. It makes him look desperate.

Indeed, the demise of the game’s true supercoach has been stunning.

Those close to Bennett simply ask one question: why? Why is it time from him to go? Has he lost the players? The coaching staff? Do they simply want to take another direction?

The man himself just wants a straight answer. Any answer.

With seven premierships to his name, Bennett is rugby league’s most successful coach but he should be remembered as more than that.

He should be the game’s Ron Barassi. Its Alex Ferguson. Its Vince Lombardi, the legendary American football coach with whom Bennett identifies more than any other coach. He has two dog-eared copies of the superb Lombardi biography When Pride Still Mattered on his bookshelf.

Lombardi died of colon cancer at the age of 57. Bennett is 68, never touched alcohol, runs 5km a day barely raising a sweat, could bench press as much as some players and has absolutely no plans to retire.

He has many faults and made many errors, as a man and coach. For many of us, the Bennett lustre simply dulled with time.

But people’s disdain for Bennett should not blind how poorly Broncos chief executive Paul White and chairman Karl Morris are handling his exit.

There’s a belief that the water was poisoned as soon as White tried to sign Storm coach Craig Bellamy to a four-year deal.

Bennett scoffs at the suggestion.

When the club had done little to dismiss reports touting Cowboys coach Paul Green and then Queensland coach Kevin Walters as Bennett’s replacements, Bennett called a meeting with his superiors to discuss his own future.

He told White that if he was going to replace him he should go after the best in the business: Bellamy.

Perhaps Bennett was being too cute for his own good, knowing that Bellamy would eventually stay with the Storm. The next best option, at least for 2019, would appear to be Bennett.

Instead, White started looking everywhere else. Instead of assuring Bennett’s future, the Bellamy knockback threw it into further doubt.

Souths coach Anthony Seibold says he has had no contact with the Broncos but it’s no secret the former Maroons assistant is their preferred option even if he’s contracted at Redfern until the end of next year. Seibold has done wonders with the Rabbitohs in his first season but he’s yet to coach a single minute of finals football.

In his first stint at the Broncos, Bennett wanted to keep his strained relationship with the club out of the headlines. This time, he seems to be in command of them.

His side’s worrying 34-30 defeat to the last-placed Cowboys in Townsville on Thursday night was lost amid the next day’s screaming headlines: “BENNETT v WHITE”.

For some, the timing was uncanny. It took the heat off the Broncos’ defeat and shifted the focus to the coach’s 34-year-old relationship with White.

“Benny,” laughed one club boss on Monday. “He’s too good.”

Bennett is the master manipulator but seems to have no control over what’s happening to him this time around at the Broncos.

He returned to the club when News Corp co-chairman Lachlan Murdoch picked up the phone and stopped him at the 11th hour from signing with the Dragons.

Does News Corp want to push Bennett out again? It doesn’t seem to be a factor. Bennett hasn’t spoken to Murdoch, who did not respond to the Herald’s requests to comment about the coach’s future.

What’s certain is that Bennett won’t be resigning like he did last time. He won’t be making it easy. Won’t be taking the pressure off anyone. There’s more blood to come.