You knew it as soon as the words came out of Shane Flanagan’s mouth last Friday.

“There is no cheating of the cap!” fumed the Cronulla coach. “Don’t even use the word! There has been a discrepancy! Now people want to say we’ve cheated!”

Which nobody really had. Not yet. Maybe asked a few questions. 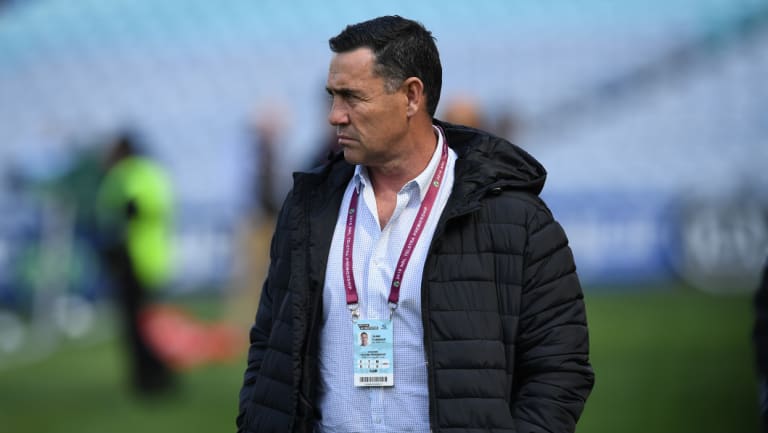 Shane Flanagan is cultivating a siege mentality at the Sharks for the finals charge.

We won’t know for months until the NRL’s integrity unit has finished rifling through the club’s Aladdin’s Cave of hard drives, laptops and beer coasters if this salary cap investigation is truly scandal-worthy.

That won’t stop Flanagan from pulling down the shutters, circling the wagons and going to DEFCON-1.

Just like Manly under Des Hasler, and before that the Bulldogs under Steve Folkes, the Sharks are the modern-day masters of siege mentality.

They did it each time Paul Gallen was charged or suspended for a grubby on-field act; they did it with the ASADA scandal, which fuelled their 2016 premiership; they do it now every time Andrew Fifita steps out of line.

They will do it throughout all of September, turning the world against them and turning it into wins.

Cronulla showed glimpses of their impudent best in the 30-18 win over the Bulldogs at ANZ Stadium on Sunday afternoon; a more than satisfactory result considering they knew before kick-off they would finish no better or worse than fourth on the ladder.

They will play the Roosters in the qualifying final at Allianz Stadium on Saturday night. Pick the winner of that one.

Flanagan had less to say after the match than he did in the days before it. Asked if he was pleased with his team’s form in the last month, he said: “Results-wise, we have. I don’t know if it’s been a pretty good month otherwise.”

He was referring to off-field distractions like Fifita angrily pointing at the coach’s box after scoring a try against the Cowboys. Then there was Fifita and Josh Dugan’s foul-mouth podcast in which they dropped more f-bombs than a wharfie. 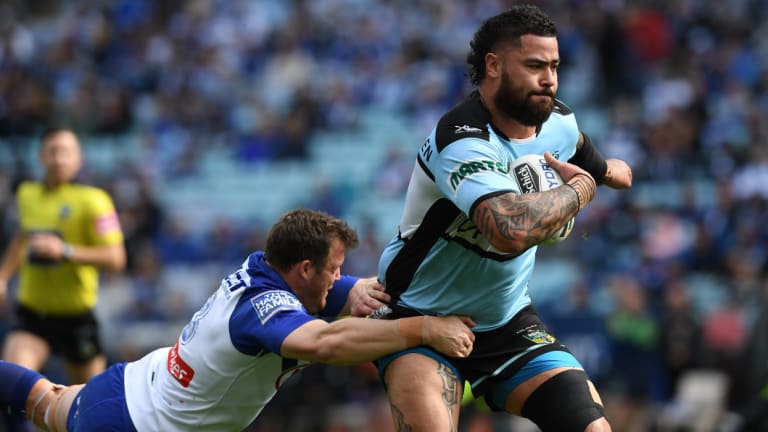 Andrew Fifita ran like a raging bull but was saved for the big show against the Roosters.

Asked about the effect of this week’s sort-of salary cap scandal on his players, Flanagan deadpanned: “The players did a good job. They were removed from that and they did a good job.”

The Sharks chief aggressor is always Fifita. An angry Fifita is a dangerous Fifita.

In the first 23 minutes, he dropped the ball on the first tackle from the kick-off; then charged at the Bulldogs defence like a cranky bull; then scored his side’s second try; then drew a penalty with another customary charge; then gave away two to the opposition in quick succession.

Flanagan hooked him shortly after. As Fifita trotted up and down along the sideline, Bulldogs fans sprayed him. He just looked at them and laughed.

He didn’t appear again until the final 25 minutes and was barely sighted.

“Andrew was definitely one of those players who knew that next week is the ‘big show’,” Flanagan said. “It’s hard for him. He wanted to get through and we just limited his minutes. He did a fair job.”

Fifita will need to do more in the big show against the Roosters, who live and die more than most sides by the mood of their forward pack. The Sharks’ middle-men are more than capable of silencing them.

Flanagan wanted to sign prop Aaron Woods before the June 30 deadline with the premiership in mind. The Australian and NSW prop showed against the team he left just half a season that it was a smart decision. 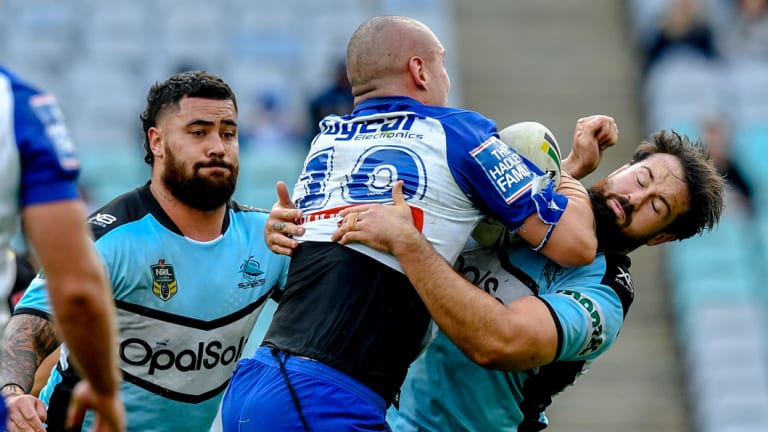 Bulldogs enforcer David Klemmer goes head-to-head with short-lived team-mate Aaron Woods, who was a demon for the Sharks.

The Roosters, Storm, Souths and the Sharks finished the home-and-away season on 34 competition points. Only for-and-against separated them. But you sense that Cronulla is heating up when it matters most.

Wade Graham has returned from injury. So, too, five-eighth Matt Moylan, who set up the first try for winger Kurt Capewell with a pass, then the third for centre Josh Dugan with a short kick.

Then there’s fullback Valentine Holmes, whose skills are as silky as any other player in the competition.

What the Sharks have is experience: they could have as many as 10 players from the 2016 grand final playing this week. They will also have the spectre of potential salary cap sanctions hanging over them.

NRL boss Todd Greenberg says the Sharks’ breaches aren’t in the same postcode as the Parramatta and Manly salary cap probes – for now. The concern is both of those forensic investigations uncovered much more than first thought.

The Sharks won’t know until long after grand final day if they’ll be sent to the naughty corner, meaning the next month will be full of speculation and accusation. It will be a shitstorm. Just the way they like it.