An emotional Julian Wilson has dedicated his stunning Quiksilver Pro France victory, which keeps the Australian in contention of being crowned 2018 world champion, to missing French surfing identity Pierre Agnes.

The title-contender prevailed 15.34 to 14.23 over Newcastle local and wildcard Ryan Callinan in an exciting fog-delayed decider in 5ft waves at the sand- bottomed French beachbreak of Hossegor on Friday. 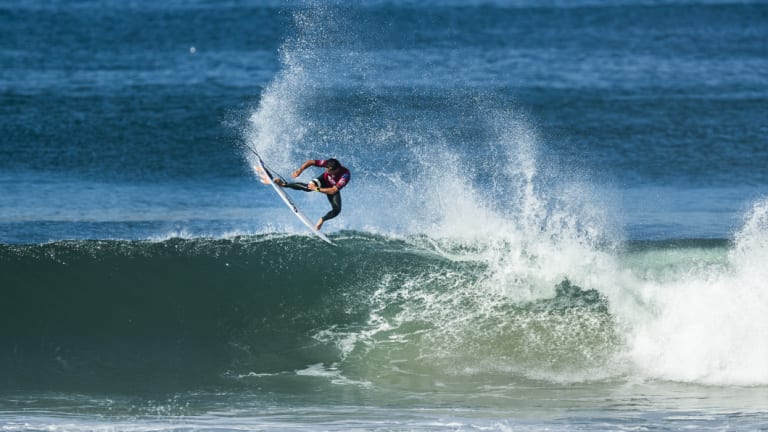 In the hunt: Julian Wilson at the Quiksilver Pro France, which he won.Credit:World Surf League

It continues a stunning season for Wilson, who now has two wins, a second place and third place finish in 2018.

The win puts the Queenslander on 47,125 points and in third place overall with two events left in the 11-stop World Surf League Championship Tour.

Wilson is now just 4660 points behind Brazilian leader Gabriel Medina, who he eliminated in the semi-final, with each event win worth 10,000 points.

The 29-year-old won the final like he won earlier heats with a series of spectacular backside airs and air reverses with a golden Bay of Biscay sunset as his backdrop.

Wilson dedicated his win to Agnes, the much-loved surfing promoter and chief executive of Boardriders, who disappeared on a routine morning fishing trip in January.

"My emotions come from dedicating my win to Pierre Agnes, it's hard to talk about," the Sunshine Coast local said afterwards, choking back tears.

"I know his boat washed in right here … such a beautiful human being. Thankyou, all the surfers love you and, the moment of silence before the final just kind of shook me.

"I got to dedicate this one to Pierre and everything he's done for surfing in France. Oh, I'm emotional, I've always dreamt of winning this event and man it feels good."

Wilson later said he was driven to win the France event, the fifth win of his career, as it was same event he had first lost a final, to Medina seven years ago.

He said it was special to share the final with his mate Callinan and great to finally win in front of his wife Ashley and baby daughter Olivia.

Callinan went toe-to-toe with Wilson, launching his own series of aerial attempts, with just 1.11 points separating the pair on the buzzer.

The goofy-footer, surfing in his first-ever final and in the running to be the first wildcard to win an event in a decade, was happy to finish second.

"To see him get those extra points and just to be there with him and have a moment … it was definitely a special moment for me," the world No.36 said.

It was her best result on the Women's Championship Tour, after the 17-year-old came ninth in the Roxy Pro Gold Coast in March, and moved her into 17th place.

She said the key to her turnaround after five 13th place finishes this year her self belief.

"I really lacked that in the past couple events and just finding that again," Callaghan said.

"I had a couple tough events, but you know, what doesn't kill you makes you stronger. So yeah, I'm glad to be back."