Liz Cambage’s stellar WNBA season came to a sudden end in the first round of the WNBA playoffs.

Cambage’s Dallas Wings were defeated by Phoenix Mercury 101-83 in Phoenix in a single elimination game with the Mercury going on to play the Connecticut Sun in the second round. 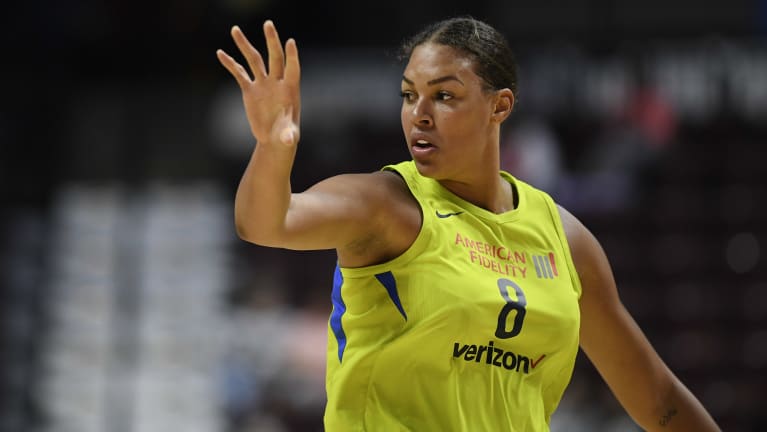 Earlier in the day Cambage as named in the US Associated Press’ WNBA first team and she shapes as a candidate for the WNBA most valuable player award although Seattle Storm’s Breanna Stewart appears the favourite after winning AP’s MVP.

But while Cambage had 22 points, 12 rebounds and six assists, her Wings side struggled with nerves and defensive issues early and never fully recovered as WNBA playoff veterans Dewanna Bonner (29 points, 12 rebounds) and Diana Taurusi (26 points, 12 assists) led the Mercury to the second round.

The age-less Taurusi is now 12-0 in WNBA single-elimination games and she could again lead the Mercury, coached by Australian Opals boss Sandy Brondello, to another long playoff run.

Mercury guard Stephanie Talbot, who will join Cambage and Brondello for the Opals' run at next month’s FIBA Women’s World Cup in Spain, turned on one of her best performances of the season offering 11 points and 11 rebounds in 31 minutes while playing outstanding defence.

Cambage led the WNBA in scoring at 23 points a game and set a new WNBA game record with 53 points earlier this season.

But she is out of contract and has talked about resting next season as she will play in the World Cup then in China making it almost a full year of playing since her return to the court before the recent WNBL season.

Cambage has also criticised the WNBA and NBA for not raising player wages with WNBA stars earning much higher contracts overseas.

Brondello named her Opals side with WNBA-based players Cayla George, Rebecca Allen, Leilani Mitchell, Cambage and Talbot in the side and Opals guard Jenna O’Hea admitted Cambage’s form in the US was exciting.

“I loved playing with her and passing her the ball during the last WNBL season plus her passion and energy – her play has gone up 10-fold during the WNBA season.”