And Pascoe went one step further by issuing a warning to the Tigers' bigger and more cashed-up NRL rivals, declaring: "We won't be picked on. The Wests Tigers are not pushovers." 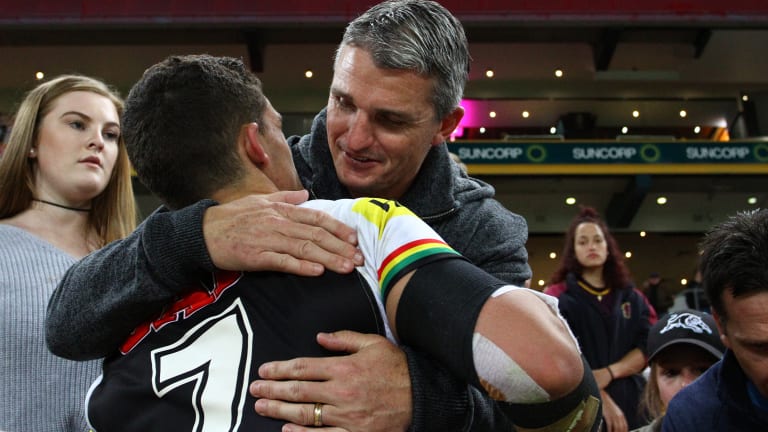 Approach: Ivan Cleary could re-join Penrith and his son Nathan.

The Panthers confirmed on Tuesday they had reached out to Cleary about replacing sacked coach Anthony Griffin.

Cleary remains close with Panthers chairman Dave O'Neill, who is keen to bring the coach back to Penrith and work with Ivan's 20-year-old son, NSW State of Origin halfback Nathan Cleary.

While there were suggestions a four-year deal had been tabled to Cleary, the Panthers toned down the extent of their dealings.

"We asked if Ivan had an interest in our coaching position and he said 'yes'," Panthers chief executive Brian Fletcher told Fairfax Media.

But Pascoe fired back on Tuesday night, saying he had spoken with Cleary several times throughout the day and there had been no talk of an early exit.

Cleary is contracted to the Tigers until the end of 2020, and Pascoe said there was no way they would grant him a release if he asked.

"We won't be letting him go," Pascoe told Fairfax Media.

"I've spoken with Ivan a couple of times today and the bizarre thing is there are all these whispers about big offers and long-term deals, but he's told me nothing has taken place other than the fact the Penrith chairman has reached out to him.

"The people out at Penrith or anywhere else can say what they want about having a good relationship with him and they're keen to get him to coach, but they're forgetting one key thing – he is contracted to the Wests Tigers, a club that is very proud and strong and who won't let Ivan go to a rival club.

"We will fight tooth and nail to make sure that doesn't happen. Clubs think we're a pushover and it's not the case. If rivals think they can try and come in and upset what we're trying to do here, they'll have a fight on their hands.

"It upsets me. The Ivan I know and the character he demonstrates daily and what he has done to assist us in rebuilding this club, it gives me the confidence he will only carry on with that professional manner [and not leave]."

The Tigers have started from scratch in recent years and 12 of the 17 players listed to play Canberra on Sunday were bought or given their club debuts by Cleary.

Most of the players who have joined the club, including new recruit Moses Mbye, were impressed by Cleary's long-term vision for the joint venture.

It is no secret the Tigers are not as rich as some of their powerhouse Sydney neighbours like Penrith, a club Pascoe and Cleary formerly worked at.

Privately, the Tigers know the chance for Cleary to be united with his son is impossible to ignore.

But they also know there is nothing stopping Nathan making his way to Concord to play with the Tigers and Ivan once his contract expires in time for the 2020 season.

Cleary remains popular with the Panthers players and will continue residing in the area before a return to the northern beaches in the new year.

Phil Gould dumped Cleary with one year remaining on his deal at the Panthers and maintained on Tuesday it was the best decision for everyone at the time.

“Clearly [Penrith] need to appoint a coach and need to get him from somewhere but it’s not good form," Go said.

The Tigers remain a mathematical chance of reaching the finals and remain two wins adrift of the top eight.

They play on Sunday in Canberra, the place where Jason Taylor coached his last game before eventually being replaced by Cleary.

Meanwhile, the Tigers have made it clear they are happy for premiership pair Benji Marshall and Robbie Farah to play on next season but maintain it is up to them and how committed they are to push on.