Here are five things we learnt from last night’s edition of the blue brand. 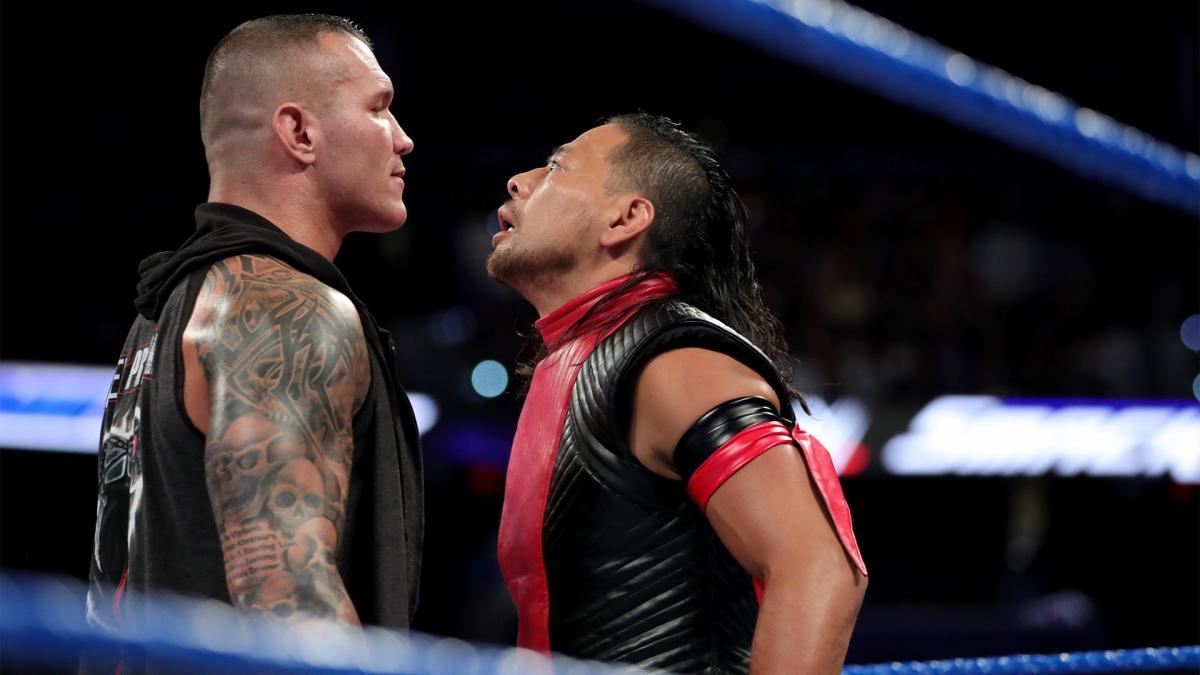 Becky Lynch and Carmella opened the show with an in ring-promo.

The women’s champ was uncharacteristically respectful towards Becky, but it was all a ruse.
Carmella sneak attacked Becky and attempted to DDT her on a steel chair.

Charlotte Flair – who’s been out recovering from injuries – charged down to make the save. 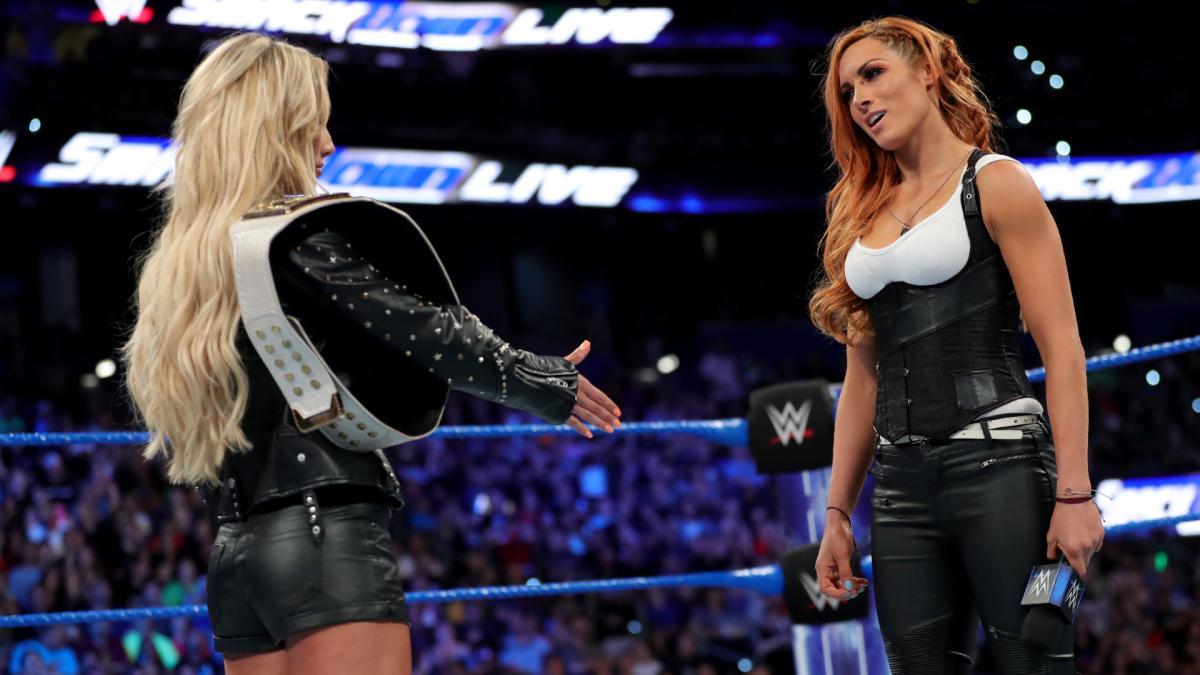 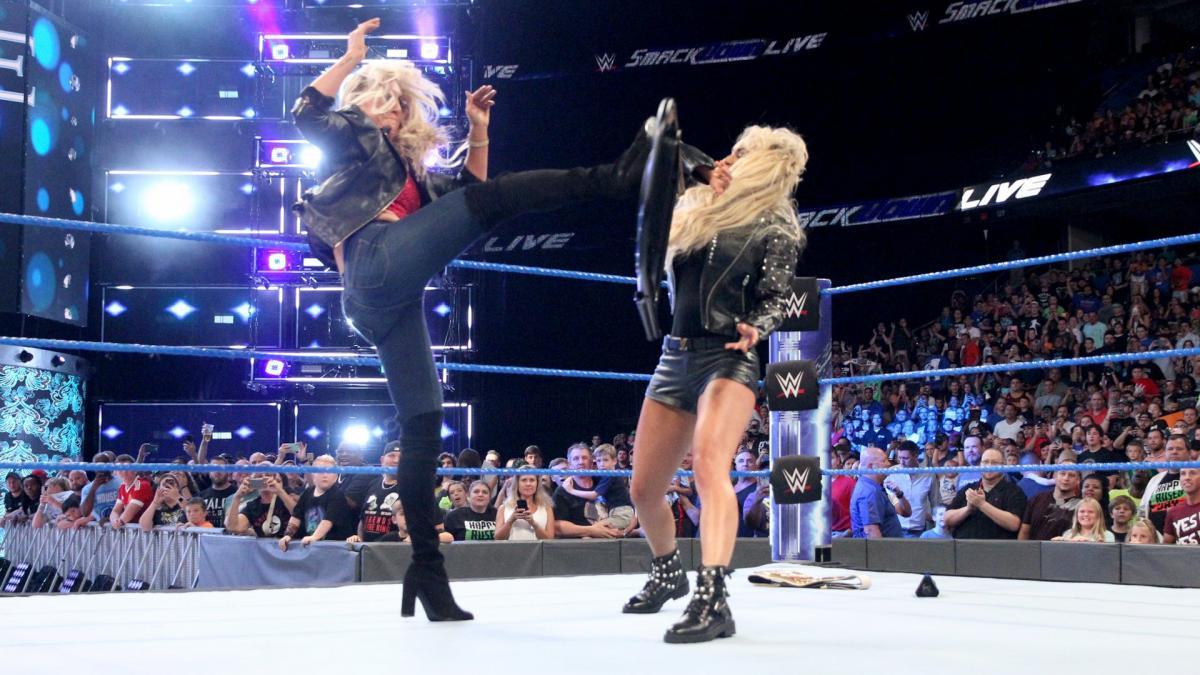 GM Paige then set up Carmella v Charlotte for later in show – if Charlotte could win she’d be added to SummerSlam title match, making it a triple threat.

Charlotte won the match with the Figure-8, while best pal Becky looked irritated backstage. But it’s Carmella who should be worried.

She’s good on the mic, but that’s two straight losses on TV and now SummerSlam is all about Becky and Charlotte. Is it safe to assume that WWE has no faith in its SD champ? 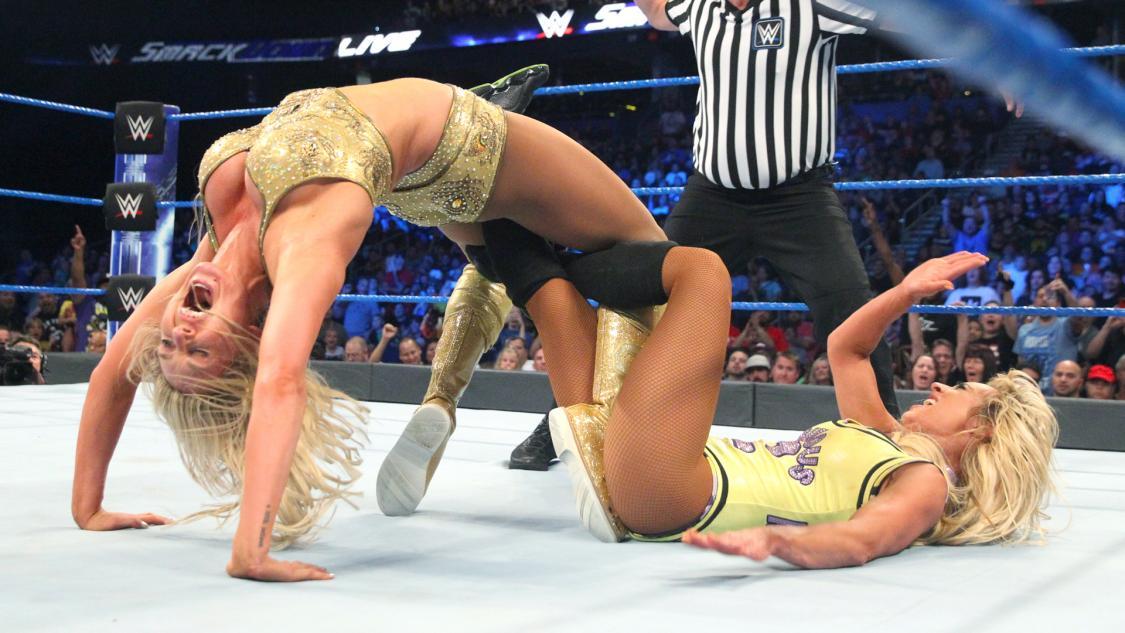 The Bar are back… and already gunning for the tag titles

Charlotte Flair wasn’t the only superstar to return to action – Sheamus and Cesaro were back in the ring after a hiatus.

They faced the Usos in the next round of the number one contender tournament. 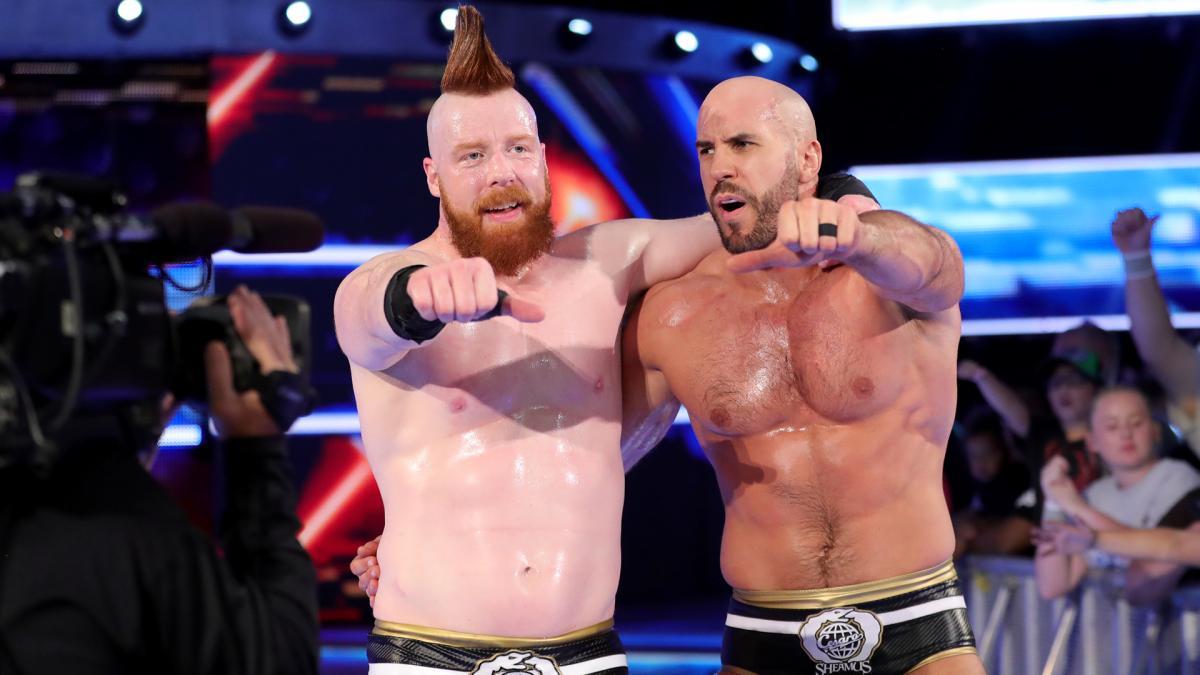 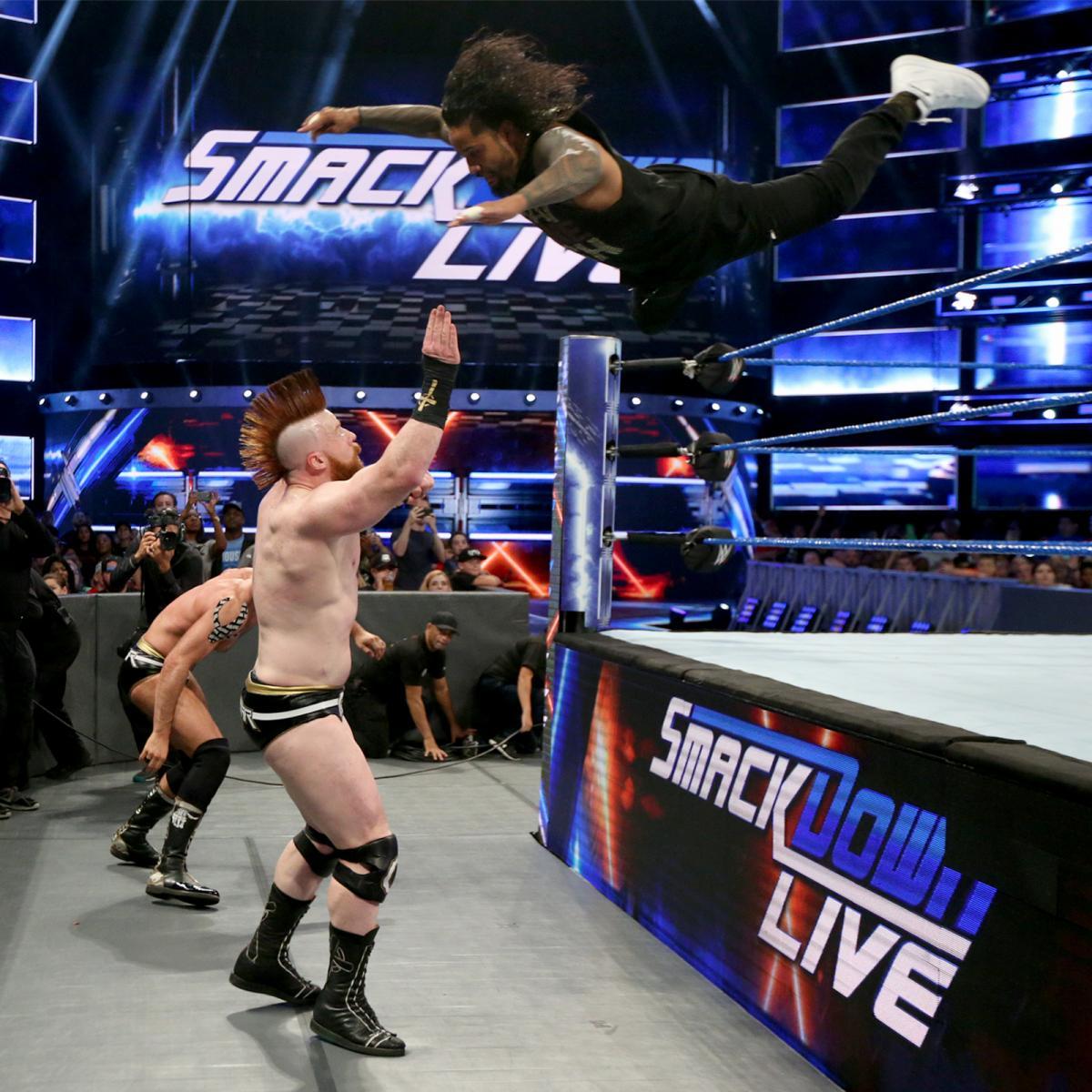 The Usos got the better of The Bar when they battled at last year’s Survivor Series, but this time Sheamus and Cesaro were victorious.

Cesaro caught Jimmy with an uppercut as Jimmy flew from the top rope, and Sheamus reversed a big splash from Jey for a roll-up win.

Now The Bar face old rivals The New Day for a shot at the Bludgeon Brothers’ Tag Team Championship at SummerSlam.

Samoa Joe has made it personal with AJ Styles

Joe hit AJ with deeply personal jibes, calling him a failure as a husband and father for putting the WWE Championship above family life.

He claimed AJ’s family will be cheering for Joe at SummerSlam, so they can have their daddy back when Joe is WWE Champion.

Meanwhile, another family unit (albeit an unconventional one – Rusev, Lana, and Aiden English) continued to fall apart last night.

Jeff Hardy has suffered not one but TWO attacks

Jeff came out to talk about losing the US Championship.

He said the title was “part of his life force” and a part of him was “severed” when he lost it.

(Which is funny, because he mostly looked bored when he had the belt and barely ever won a match.) 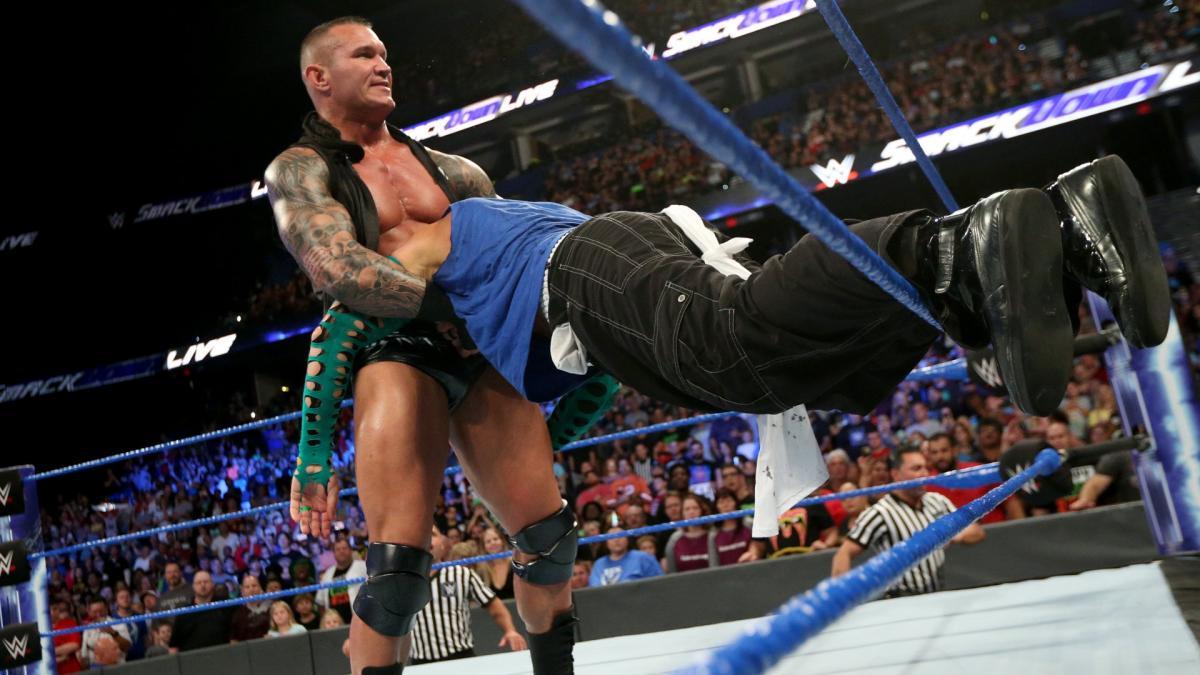 He called out the newly-turned-heel Randy Orton, who obliged by strolling out for a fight – but US champ Shinsuke Nakamura blindsided Hardy from behind.

Orton and Nak had a weird stare down, before Orton gave him permission to nail Hardy with the Kinshasa.

The Viper then nailed Hardy with two draping DDTs, including one from the ring apron to floor, which looked particularly brutal.

But where’s this all going? Are Orton and Nakamura in cahoots?

Or will “The Viper” strike Nak too as soon as his back’s turned?

The Miz is using childish tactics to taunt Daniel Bryan

Last week The Miz used a fake baby to lure Bryan into an ambush.

This week he used pictures of crying babies on the big screen to further mock Bryan.

In the wrong hands that would have been a terrible gag (i.e. John Cena’s – remember his Photoshop mocking of Bray Wyatt?). But Miz and Bryan made it an excellent promo.

Miz told Bryan that the WWE universe is over him and it’s time for Bryan to move on – let his contract expire and go back to the indies to entertain “dozens” of people. 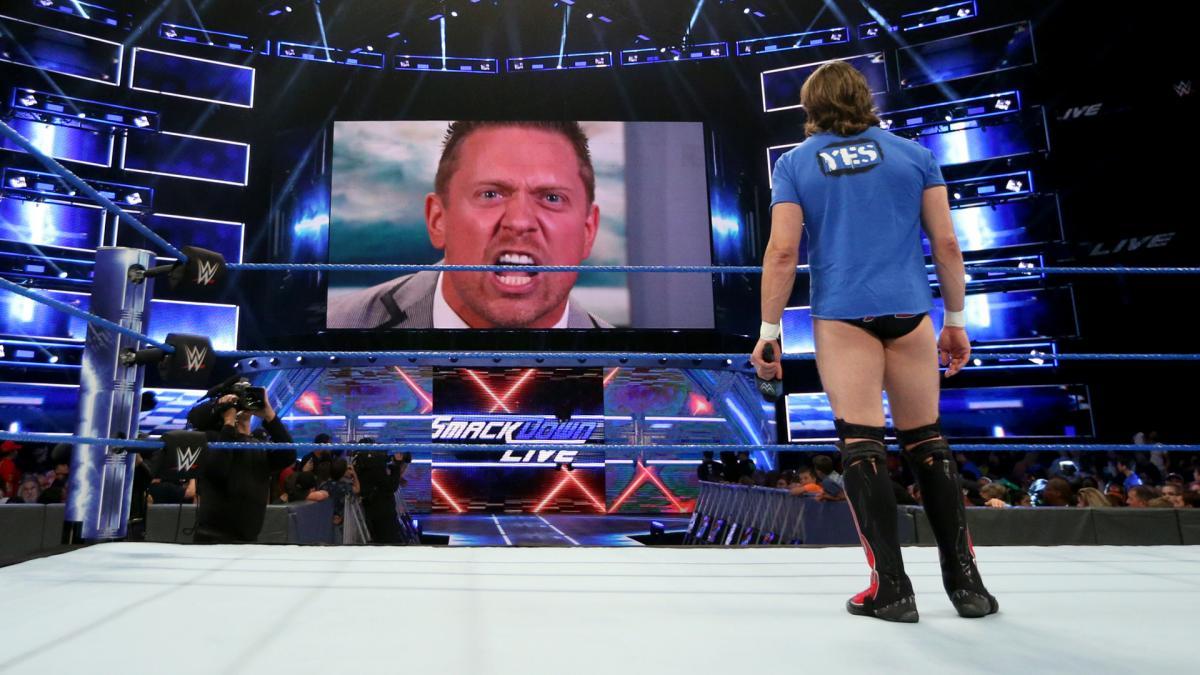 Bryan came back with a line that perfectly sums up the dynamic that makes them such natural opponents: “For me this is about passion, for you this is about fame.”

Bryan also challenged Miz to a match at SummerSlam.

Miz didn’t accept, but Bryan wouldn’t have hinted at match if WWE officials didn’t already have Bryan v Miz lined up for the big show.