Just when there is already plenty on the line in the Suncorp Super Netball preliminary final this weekend between GWS Giants and Sunshine Coast Lightning, the Silver Ferns squad for the upcoming quad series gets announced.

Wait what? What does that squad announcement have to do with this weekend’s final?

Turns out it has plenty to do with it for a couple of reasons. The first is something that wasn’t announced when the squad was, which is who will coach the Silver Ferns.

Given we are less than a year out from the next netball World Cup, you could be forgiven for thinking it is remiss of Netball New Zealand to announce a coach-less squad. Unless your coach was busy elsewhere. Like maybe coaching a team in the Super Netball finals.

You don’t have to be a rocket surgeon to join the dots and come to the conclusion that Sunshine Coast Lightning’s coach, former Silver Fern Noeline Taurua is likely to be anointed as only the 11th coach of the New Zealand netball team. In fact an imminent announcement appears to be accepted fact across the ditch, with the word being that netball bosses are prepared to wait until Lightning’s season has finished, one way or the other, to make the announcement. 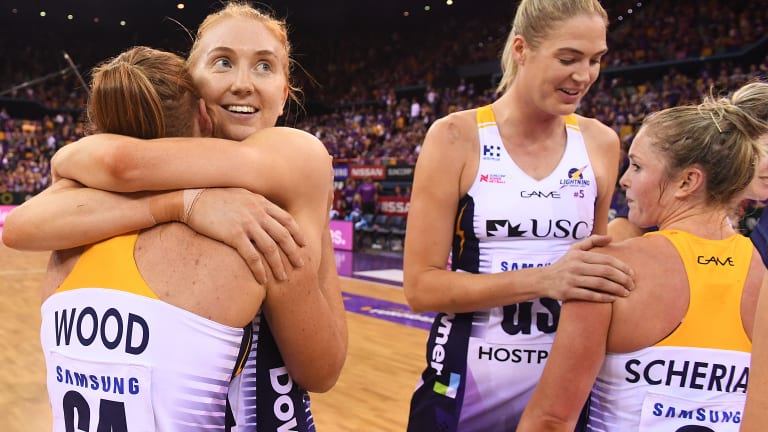 Lightning strikes: Madeline McAuliffe and Stephanie Wood after the win over the Firebirds.

Which is interesting, given that Taurua still has another year on her contract with Lightning, who are adamant that she has committed to them until at least the end of next year. A distinct possibility is that Taurua will do both. Which brings me to my next point.

Announced in the Silver Ferns squad was none other than Laura Langman. The last we saw of Langman, one of the world’s best netballers, she starred for Lightning in last year’s Super Netball grand final. In the off-season she announced what seemed to be a premature retirement and, until this week, had seemingly disappeared into the land of the long white cloud to play local netball and get on with the rest of her life.

Yet here she is this week, announced in the Silver Ferns squad and ready to make a much-anticipated comeback in the black dress, all without being signed to a New Zealand club. Which begs the question: if Taurua is allowed to coach the Silver Ferns and coach in Australia, surely the same concession has to be made for Langman to play here, and she can reconnect with her former club?

All of this would normally be considered great news for Lightning. This week though, it has the potential to become an unwelcome distraction in their quest to win the preliminary final.

This final promises to be an epic rematch of last year’s grand final, with a couple of extra twists. Lightning will be desperate for the chance to try to win back-to-back Super Netball titles and, in doing so, show that losing Langman in the off-season was a bump and not a road block.

Giants, on the other hand, will be hell bent on making amends for their abysmal showing in that decider, where they went down by 17 goals. They also have the added motivation of sending gun goaler Susan Pettitt into retirement as a winner, and Serena Guthrie back to England as a premiership player.

To win a match like this you need to be focused. Distractions like the ones potentially faced by Lightning this week can be lethal. If any team is up to the task though it is Lightning. They are well led by Geva Mentor, and have plenty of experience all of the way down the court. They come into this game on the back of a five-game winning streak and, after toughing out the win against the Firebirds last week, go into the game as favourites.

They will need every ounce of experience and determination against a Giants team who they haven’t beaten this year, and who will have the benefit of a massive Sydney home crowd behind them. It's shaping up as a match for the ages between two teams who could look very different next season.