The ACT Brumbies are hoping their scrum pieces will fall into place in the coming weeks, and a 20-year-old making his comeback from a knee reconstruction has a chance to make his mark this week.

Tom Ross will get his first National Rugby Championship starting experience when the Canberra Vikings play the NSW Country Eagles in Armidale on Sunday. 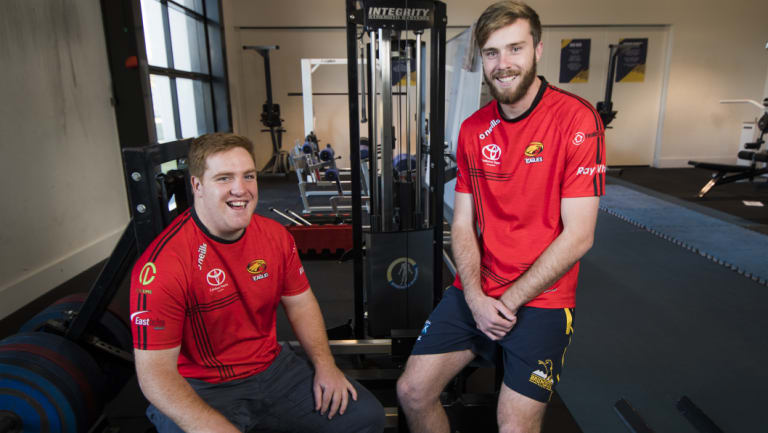 Tom Ross, left, and Mack Hansen have been called into the Canberra Vikings’ starting team.

It's the next step in his promising young career after rupturing his anterior cruciate ligament last year and fearing his rugby days had stalled before they started.

But Ross, the nephew of Canberra Raiders legend Bradley Clyde, has won a Brumbies contract, played for the Australian under-20s team and now the Vikings in an impressive return to the field.

The Brumbies have just three props in their full-time roster for the 2019 Super Rugby season. Wallabies Scott Sio and Allan Alaalatoa will shoulder most of the workload, while Les Leuluaialii-Makin will be playing his third season.

The club is on the verge of finalising a deal to sign out-of-favour former Queensland skipper James Slipper, with the Wallabies veteran desperate to resurrect his career in Canberra.

Slipper, who has been dealing with mental health issues and was suspended earlier this year after twice testing positive to cocaine, would add valuable depth and experience to the Brumbies roster.

But Ross represents the new generation of bookends. The 118 kilogram, 180 centimetre front-rower is viewed as a long-term option for the Brumbies' scrum.

"At the moment I've just got to bide my time and play as much footy as I can," Ross said.

"Starting this weekend I'll get plenty of minutes and that will help develop my game. When I did my ACL, I had to start from scratch this year … I didn't really expect anything this year. I was more looking to 2019.

"I've been very lucky and I've had a lot of opportunities. The NRC came along and I'm chuffed with the opportunity."

Ross is one of five changes to the Vikings' starting team as they chase a hat-trick of wins in the short competition.

Rob Valetini will start at blindside flanker, Joe Powell has been released from the Wallabies to get game time, Irae Simone gets his first opportunity and Ross' Gungahlin teammate Mack Hansen is at fullback.

"When [Ross] gets these responsibilities in big games against good opposition, it's going to help him," said Vikings coach Nick Scrivener.

"I guess he's been identified by the Brumbies because he's a guy with big potential. He has potential.

"The profile of props is changing … a lot of guys are younger now. The opportunity is there for him, whatever happens in the future will set him up from what's going to happen down the track."