The Harry Potter film franchise gave us eight movies brimming with magic, and made Warner Bros a buck or two besides. But there are some goings-on in the movies that go beyond the explanation of mere magic.

Here are the weirdest mistakes and continuity errors to grace the Wizarding World.

1. Philosopher’s Stone – Now you see him, now someone else does… 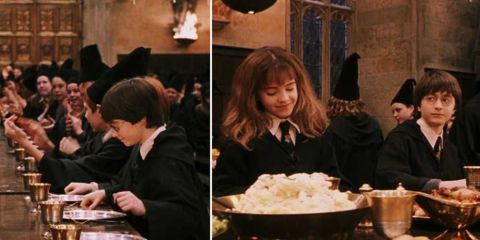 Harry has only just got to Hogwarts, and already he’s Apparating. In one scene in the Great Hall, he’s sitting on the right side of the table, opposite Percy and Hermione. In the next, he’s jumped across the table, pushing Hermione aside to take her place next to Percy. Impressive magic, Harry, but not very polite of you!

2. Chamber of Secrets – Why, hello there, cameraman!

The scene is the duelling club. Draco Malfoy has just been beaten by Harry. And it is so marvellous that apparently Hogwarts wants to record it for posterity (probably Professor Lockhart’s idea). For in the background of the scene, who can you see but a cameraman?

3. Prisoner of Azkaban – Wizards or robots? 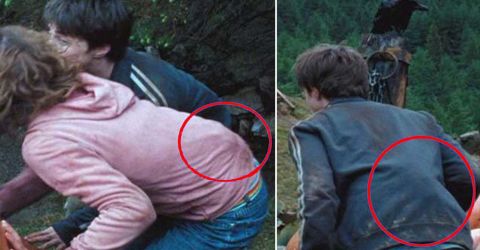 News flash: Harry and Hermione are, in fact, androids. When they go back in time (proof they’re not human, surely?!), and are hiding in Hagrid’s garden, you can see the power packs that keep them running.

Okay, okay, it’s the power packs to their ‘hidden’ microphones. Warner Bros maybe need to look up the meaning of the word “hidden”, yeah?

4. Goblet of Fire – Whose Towel is it Anyway? 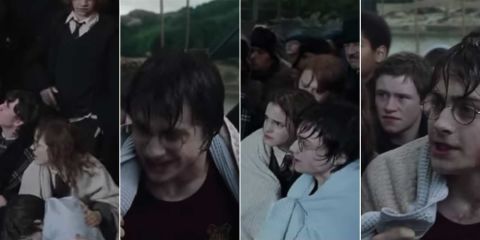 Harry, bless his stubborn little heart, has just rescued all the hostages from the bottom of the Great Lake in the second task. Hermione is kind enough to give him a towel to keep him warm. Um, and then take it back. And then give it to him again. And then take it away again.

Watch the scene. The towel jumps between the two of them continually.

5. Order of the Phoenix – Where are her(mione’s) feet? 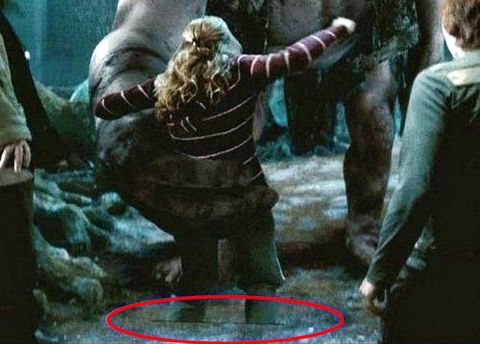 Now you see them, now you don’t…

Grawp, Hagrid’s ‘little’ brother, goes to pick up Hermione. Terrifying enough for the poor girl, you’d have thought, without the fact that – oh my gawd, where have her feet gone??? Suddenly, her legs are cut off at the shins, and if you look carefully, you can even see the digital lines on the screen where the digitisers were (not wildly successfully, it seems) at work. 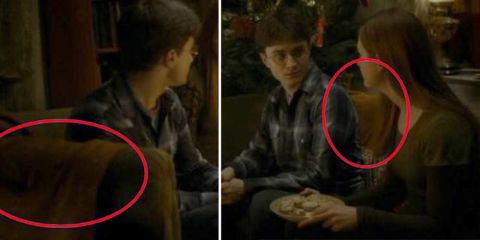 Towels, blankets! Everything’s on the move! When Harry is staying at The Burrow (the Weasley’s house, for those not so up with the films), there is an orange blanket on the arm of the sofa by him as he chats to Ginny. Like Harry himself, it seems to want to get closer to her, as it sneaks round from the sofa arm to being behind him in the next shot.

7. Deathly Hallows: Part 1 – Even the books are haunted now 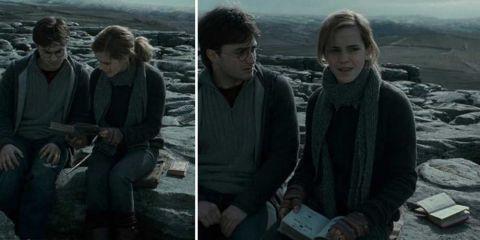 When Harry and Hermione are sitting outside looking for information on Horcruxes in a book, there is another book behind them. Between one shot and the next, it mysteriously opens of its own accord, even though there’s no wind.

Is it magic? Is it haunted? Is it trying to tell them something? Is it the horcrux of one of the camera crew? Inquiring minds want to know. Dun dun dun…. 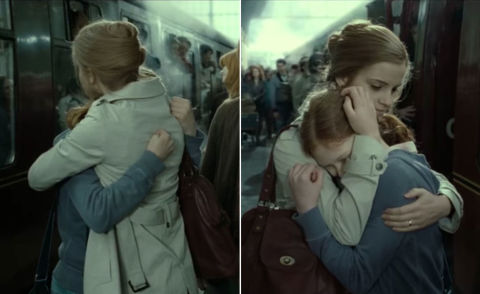 It’s the end of the movie, the epilogue, the ’19 years later’. Maybe they think we’re all so busy crying over the end of an era that we won’t notice that when Hermione hugs her daughter Rose, Rose’s hand jumps position from her mother’s back to her arm. Maybe they’re right – or maybe they were. They’re not now…