Tonight’s instalment of The One Show saw Alex Jones and Chris Ramsey welcome Nicola Roberts and Derren Brown to talk about their latest career moves. However one segment did not focus on the guests but instead young children in Scotland who have returned to school for the first time since the coronavirus pandemic put the country on lockdown.

A short video was shown of parents, children and teachers all talking about returning to school and the measures in place to keep everyone safe.

As the segment came to an end, Chris noted his own son was excited to go back to school.

He added there had been lots of messages on social media and began to read one email out.

Alex then proceeded to share another message but it left her fighting back tears. 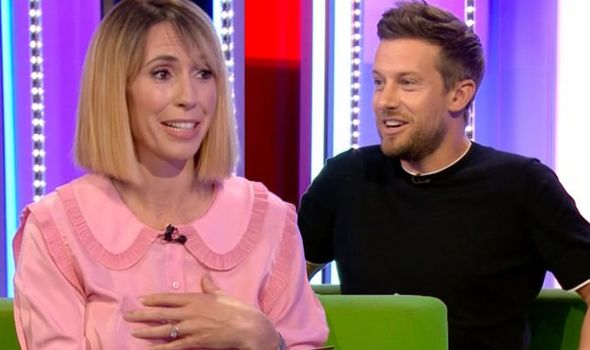 She began: “Nicola on Facebook says, ‘My eight-year-old son Kieran went back on Wednesday.

“I was worried because he has autism so we didn’t know how he would react to all the changes.

“But he has been amazing – oh, it makes me so emotional.

As Alex fought back tears over the heartfelt message, Chris had to jump in and change the top of conversation.

“Aw bless you!” Chris exclaimed before turning to The One Show screen which showed Derren. “Save us, Derren!”

The guest then went on to talk about his career and new show which airs on Sunday night.

The moment comes after Alex Jones as convinced her co-star Angellica Bell had signed up to take part on Strictly Come Dancing.

Fans known Alex starred on the BBC dancing competition back in 2001 for the ninth series.

She was partnered with James Jordan and they finished in fifth place.

As speculation is rife about who will star on this year’s series, Alex was convinced Angellica was taking part after a big hint on last night’s The One Show.

She asked: “We’re gonna do some rumours. Bell, tell me now, are you doing Strictly?”