Alexandra Burke has revealed that despite making her debut in the West End’s Chicago next week, she only got her script three weeks ago.

Speaking to This Morning guest hosts Ben Shephard and Mollie King, Alexandra said that she’s refusing to take a day off as she needs to get her new role of Roxy Hart perfected in a terrifyingly short space of time.

“I only got the script three weeks ago,” she said. “I’m doing a run through in costume today. They wanted to give me a day off tomorrow but I was like, ‘No! We need to go through all the mistakes.’ Because there’ll be mistakes today!”

Alexandra is clearly not afraid of hard work, as she’ll be going back into The Bodyguard – a show she calls “my baby” – just a couple of weeks after finishing on Chicago.

And the singer added that she’s happy to keep working for the foreseeable future, because she never takes her job for granted.

“I don’t stop but I wouldn’t have it any other way,” she said. “For me it’s a mental thing, I like being busy.

“I love being on stage and I’ve always dreamed of being on stage since I was a young girl. I won X Factor almost 10 years ago and I still get to be on stage. I don’t ever take a day for granted.” 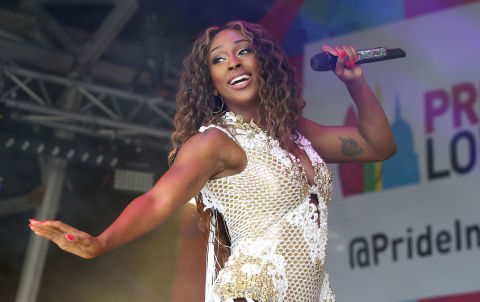 Alexandra got engaged to her boyfriend Josh Ginnelly in 2017 but the former Strictly Come Dancing finalist admitted that the couple haven’t really had much time to plan their wedding yet.

“I want to travel with him more and then hopefully we can focus on the wedding,” she said. “It’s just magical being engaged.

“I do want a family at one point. I’m not ready for it right now but maybe in the next couple of years – three, four years – I’ll be ready to settle.”