Ana Navarro has become a fan favorite on The View. The Nicaraguan-born political pundit identifies as a Republican just like Meghan McCain. Although the latter co-host has questioned Navarro’s loyalty to the party, her values have remained the same. The Friday co-host announced she was going to be off the talk show for the remainder of the year and fans are not happy. 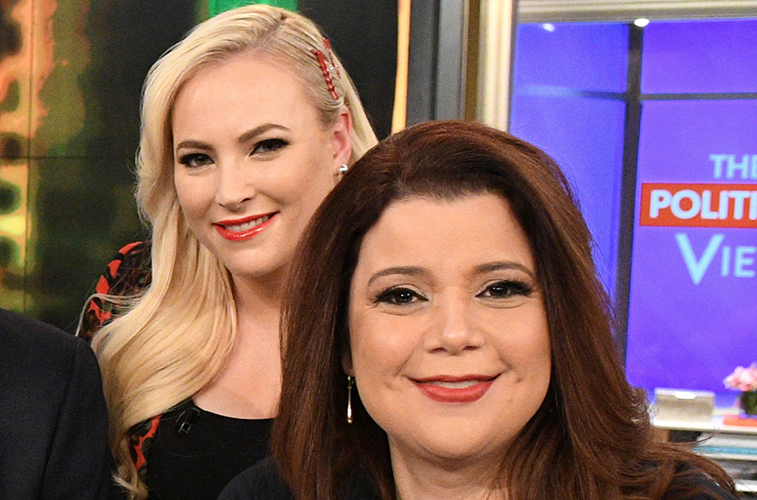 Following Friday’s episode, Navarro tweeted a response to a fan that told her they love when she’s on The View.

“Thank you,” she replied. “That’s a wrap for me for 2019. Not back on The View again until January. To all the viewers, have a Happy Holidays — Christmas, Hanukkah, Kwanzaa… or just celebrate life.”

Navarro is a permanent guest co-host that comes in on Friday’s when Whoopi Goldberg has the day off. The View is set to go on hiatus until the new year following next week’s batch of new episodes. Navarro confirmed she won’t be appearing on the morning show next week.

Viewers of the show love Navarro on The View. Although she is only on the show once a week, she has been able to adapt herself in a way that seems natural. Navarro has a distinctive way of saying things and inserting herself in the debates without offending the other co-hosts. Her approach is completely different than McCain’s and that’s possibly why fans think Navarro should replace the latter.

“I am a huge fan and have told you before I wish you had a permanent seat on The View, preferably Meghan’s seat,” a fan wrote. “You bring so much wisdom to the show. I don’t know how you feel about it, but just know there are so many people that feel like I do.”

“Looking forward to it,” another fan replied. “You should replace Meghan permanently.”

Dear friends from Miami stopped by @theviewabc today. I ❤️ that this a group of lifelong friends who take a girls-trip to NYC every year to have fun and celebrate their friendship.

“What do I want for Christmas?” a viewer asked. “I want Ana to replace Meghan McCain on The View.”

“I wish they would get rid of Meghan and give Ana a permanent seat,” another viewer added.

“I only watch whenever Ana Navarro is on. Meghan’s pouting and the over-talking is a bit too much for me most days,” another fan commented.

Navarro was reportedly in talks to take a permanent seat at The View a couple of years ago. According to Daily Mail this didn’t happen because McCain “begged” producers not to hire her. At the time, Sara Haines had left the show for her own talk show. In the end, it was Abby Huntsman that took the open seat, who happens to be McCain’s friend.

Earlier in the season, Navarro and McCain had an intense argument that led the latter to walk off the set.

“You know, I’m two feet away. Don’t need you to scream at me this way,” Navarro told McCain during a heated debate.

Taking a little time to enjoy @theviewabc at the #Hamptons.

“You know what, that’s so rude Ana, welcome back,” McCain later said while Joy Behar sent to commercial break.

As the cameras panned out into a wide show, audiences at home were able to see McCain get off of her seat and walk backstage. Both Navarro and McCain have since cooled off but the tension still exists.