Big Brother: All Stars’ Bayleigh Dayton found herself at the short end of the stick when she was the fifth houseguest voted out of the season by a unanimous 9-0 vote Thursday night. Dayton found herself up on the block alongside her “untouchable” and best friend in the house, Da’Vonne Rogers, making it even more difficult to campaign to stay. Dayton’s eviction was the culmination of a tense week inside the BB walls with fights, arguments and betrayals. With a majority alliance dominating the game thus far and the house adopting a don’t-make-waves mentality, the outspoken Dayton’s straightforwardness and realness had her out the door.

Even though Dayton’s last week in the Big Brother house was tense, the 27-year-old had a healthy perspective on the whole experience the day after her eviction. “Everybody was asking me as I was eliminated if I was OK and I really, truly am,” she told ET’s Lauren Zima on Friday morning. “Like, I feel honored to have been a part of the All-Star cast. I feel honored that they decided to evict me before jury started. I’m blessed… I’m very happy with the way I conducted myself in the house.”

Dayton addressed the fight between Rogers and Christmas Abbott, which began because Abbott used information Dayton provided to her revealing that Rogers was her “No. 1” in the house. Dayton acted as a mediator of sorts, trying to calm both Rogers and Abbott down during their heated argument.

“There’s a lot of things that are going through my head when it comes to the fight. But I’m feeling like the fight needed to happen because there were so many things that were addressed in the fight, after the fight. Even the conversation that I had with one of my houseguests, Kevin, afterward where I had to break down to him the difference between, ‘OK, if Da’Vonne and I were to do what Christmas did, this is how we would be labeled. She just has a different standard when it comes to these things,'” she explained. “The conversations we had were very healthy and I feel like the fight needed to happen. I hope that eventually Christmas sees the difference between the way she conducts herself and the way that we conduct ourselves and the double standard there… I know for a fact she doesn’t [understand] but I know that when she gets out of this house we gonna have a phone call and she will.”

Dayton “absolutely” plans on connecting with Abbott once the game is over to hash things out. “For me, it’s important for people to learn from these experiences. Even afterwards — she literally told everybody that she had just been attacked — that’s a problem,” Dayton said. “So what we’re gonna do is we’re gonna sit down and we’re gonna talk it through until she learns. I don’t want her to just walk away from the experience and thinking she’s 100 percent right and people were attacking her. No, let’s sort through this and let me make you understand where we’re coming from.” 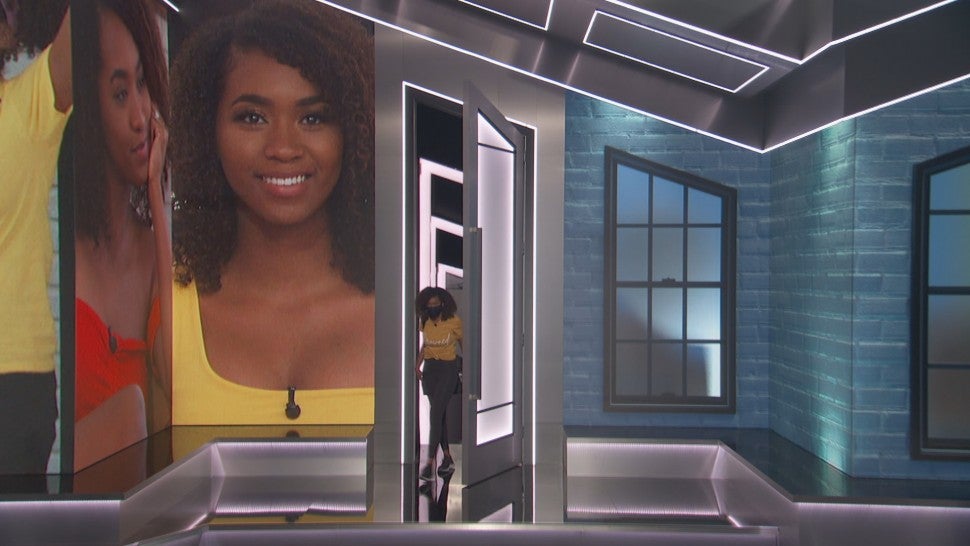 There are “multiple things” Dayton would like to say to Abbott. “Christmas and I had a conversation where she calls her alter ego ‘Towanda,’ which, OK, I get it. But do you understand what that means to me as a person and what that says? That’s No. 1. I want to talk to her about that and the microaggressions and I want to talk to her about the labels — about respecting people’s faces and how if she does something like that, it’s OK but if I do it in return, it’s not OK,” she observed. “What I’m offended by is that I’ve had these conversations with you beforehand and then you still put me in that compromising position. And if you respected someone, you would not do that to someone, especially knowing the burden that they carry and the time that we’re in. So yeah, I definitely will have a conversation with Christmas about it.”

There was one specific moment that wasn’t shown in the CBS episodes, but appeared on the live feeds. Fans noted that Abbott admitted in a conversation with another houseguest that she was “scared” of Dayton and was “going to get shot.” Asked for her reaction to Abbott’s remarks, Dayton was surprised.

“This is my first time hearing it. I was not aware, but that was the vibe that we were getting and I’m so glad that it was shown and that it was seen because a lot of the times when we talk about these things, people are like, ‘Oh, you’re just bringing race into it. You always pull that card.’ No. These are things that we feel and we have evidence that this is how people are behaving and this is what they’re saying,” Dayton said. “I knew from Kevin, he said, ‘She wants me to keep things calm after the nominations.’ And I’m like, ‘That only means one thing. You think we’re gonna just blow up.’ I’m so happy that Day and I handled ourselves the way that we did, because we could’ve blown up. We could’ve been angry. But that’s what she wanted and I would not give her that.”

Dayton also addressed Tyler Crispen‘s offer to be a replacement nominee after the veto so he could go home, potentially saving Dayton and Rogers from eviction, and her belief that it ultimately wasn’t genuine. Crispen had cited the Black Lives Matter movement during his plea with Dayton and Rogers as being partially the reason why he was willing to sacrifice his place in the game.

“It was a slap in the face because he knows how important it is and he knew that he was covered no matter what, so he can say, ‘I’m gonna confess this to Christmas,’ but he said, ‘I want to do it alone.’ So it could’ve have been a situation where he came in and we were all together and we really hashed things out, but he chose to do it privately, and I don’t feel like she would have ever really used it or put him up even if he begged her for it since I know they are playing the game together,” Dayton reflected. “It just wasn’t gonna happen. But I do think he had good intentions and I do think he felt really guilty for the things that he was doing and so he had to clear his conscience. But the conscience-clearing was more for him and less for us.”

“I think the crazy part is I was having this conversation all day with Day, and I was really struggling because she was like, ‘He wouldn’t do that. No one would use this knowing what the world is going through as a ploy.’ And I just sat with her and I said, ‘You haven’t played with him before,'” she continued, referring to playing with Crispen on season 20. “I played with Tyler, I know how manipulative he can be. I know that he’ll do anything for his game, so I was not surprised when the veto was not used.”

Asked if Dayton believed Crispen used the Black Lives Matter movement to further his Big Brother game, she hoped that wasn’t the case. “It sucks because hearing what you just told me makes me feel as if that was definitely something, but in my heart of hearts, I really cannot believe that anybody would stoop that low,” she said, adding that she thinks Crispen is an ally in the movement. “So if he did, that is so unfortunate. That’s low.”

Dayton hopes Abbott and Crispen can find redemption as All-Stars continues on, but it’s going to take a lot of work on their part to look inward.

“I hope so because there are moments where you’re like, ‘OK, this person is really, really cool,’ so I hope Christmas takes responsibility instead of playing the ‘I’ve been attacked, I’ve been a victim’ card,” Dayton said. “The problem is that when people do things like this, they deny it or they don’t take responsibility. That’s where we get into backsliding territory. As far as Tyler, he’s no longer my responsibility. My hands are done with that.”

The Los Angeles, California, resident said she feels more betrayed by Crispen because of the years of history they have with the Big Brother game.

“Tyler, it’s been years and years and so many text messages. He had [his girlfriend] Angela [Rummans] texting [my husband] Swaggy [C]. The lengths that he will go to, they just don’t end,” Dayton said. “‘Don’t tell me that you love me. Don’t tell me that you know. I would never use Black Lives Matter,’ then still say things like, ‘She’s pulling the race card, she’s a sucky player.’ Come on. It’s just disappointing.”

“We might have to be [done],” she continued, referring to her relationship with Crispen outside the house. “It’s literally like, how many times can I forgive you when you’re the one who hurt me in the first place?” 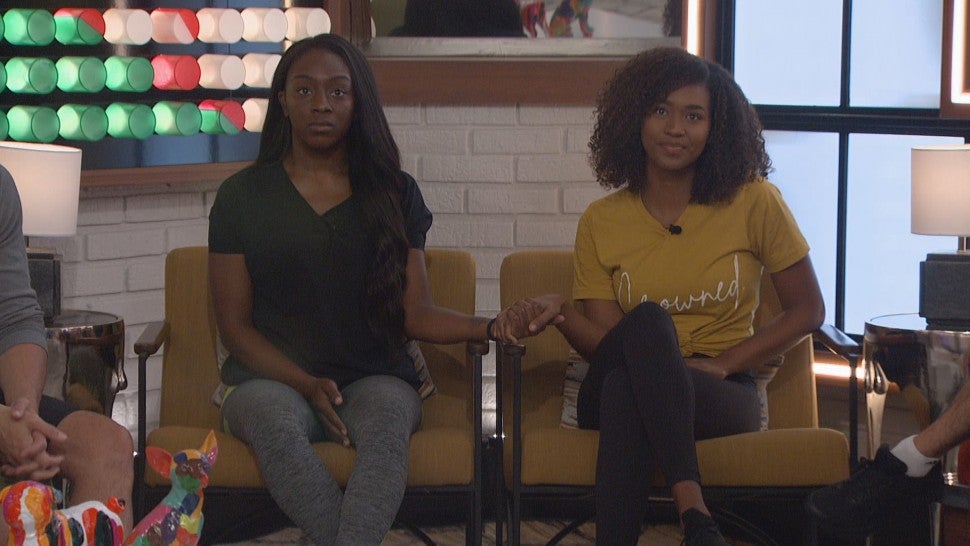 One positive that’s come out of All-Stars is her friendship with Rogers, and Dayton praised her closest ally for her pre-eviction speech, where she paid tribute to Breonna Taylor and all the Black lives lost.

“I’m so grateful for this bond,” Dayton said. “What people need to realize is that even coming into this game, this was so much bigger than us. This was, ‘OK, how can we turn down an opportunity to be on a national platform in a middle of a [moment] like this? Our people are suffering. We’re going through this experience together and it’s our job to be able to represent that.’ So we came in here with intentions to represent and represent well and I believe that we did.”

“And we had to bring it all the way full-circle why we’re standing there. We are there because of Black Lives Matter, because of our cause, so remember why you’re in the house and she nailed it,” she said of Rogers’ speech. “I wanted to touch on the fact that they want us to fight. Normally Black women situations, where there’s only room for one of us and they want us at each other’s throat, and that’s not the case. I will always support her. I will be her No. 1 fan, behind Kadence, but I am there for her. I’m just so grateful her and I were on the same page and I’m grateful it was heard.”

Dayton was one of three Black houseguests this season competing on All-Stars, a point she didn’t take lightly.

“I knew the moment was going to be big,” she said. “I would’ve rather it have been final two, you know? And not next to each other on the block. That was our plan, but regardless, the job was done… I think people saw the hurt and the passion and every conviction behind our cause.”

Big Brother: All-Stars airs Sunday, Tuesday (special day) and Thursday next week on CBS. Watch ET’s interview with Kaysar Ridha on being the fourth-evicted houseguest in the video below.

‘Big Brother: All-Stars’: Kaysar Ridha on His Eviction Speech and Never Making it to Jury

To stay up to date on breaking TV news, sign up for ET’s daily newsletter.