Brooklyn Beckham has left viewers scratching their heads after making a breakfast sandwich during an appearance on a cooking segment.

The eldest son of David and Victoria Beckham, 22, joined Hoda Kotb and Carson Daly on the Today Show in the US where he rustled up some bacon, sausage and egg and encased it between unbuttered and untoasted white bread and a drizzle of ketchup.

After declaring that cooking is ‘something I love doing’ and that he makes this particular dish ‘every morning’, Brooklyn got to work.

‘English bacon is the best bacon,’ he said as he put the meat in the cast iron pan. ‘When the bacon is cooked, I put it on a paper towel so it’s not oily.’

Brooklyn then proceeded to cook the sausage, telling the hosts: ‘You put it in and when it’s fully cooked all the way around, I slice it in half. I slice it and cook the inside.’

The hosts then asked a few questions about their guest’s tattoo game, with Carson saying: ‘You can just tell your artwork is fantastic.’ 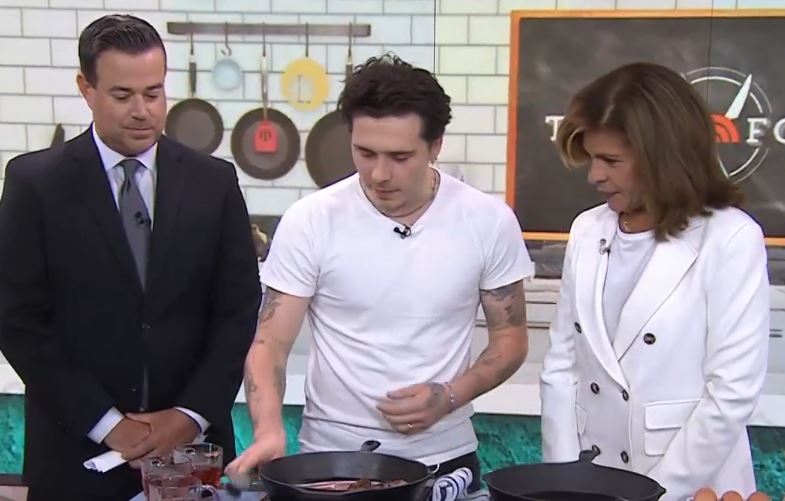 But Brooklyn declined to admit he had a favourite piece.

As the segment moved on, Brooklyn was quizzed on whether he grew up eating the breakfast sandwich, to which he responded: ‘Yeah, so, my great-grandma taught me how to make this so it’s really special to me.’

He then assembled the bap and explained: ‘I first put the sausage, bacon and then the egg. I always like to squish it down a bit.’

The presenters were living for the food, with Hoda exclaiming: ‘Oh my God, Brooklyn, come on. Come on!’

But viewers were a little confused as to whether the whole thing was meant to be taken seriously.

‘So he made a sausage, english bacon, and non-runny egg on…untoasted white bread. With ketchup. Was this meant to be a joke?’ asked one.

Echoing a similar sentiment, another penned: ‘Seriously? Embarrassing for everyone involved. Who paid who to get this aired?’

Brooklyn appeared again later on in the show where he then made steak quesadillas.