Tonight’s episode of Celebrity Big Brother (August 19) saw the housemates take part in a rather controversial task as they were asked to “build a wall”.

Clearly parodying the US border control situation, the task was deemed to be distasteful by some viewers, claiming that it was trivialising a serious issue.

During the task, invaders dressed as Donald Trump, Melania Trump, The Queen and Hilary Clinton tried to make it over the border and steal green cards from the garden.

Natalie Nunn in particular was offended by the task, and took aim at house President Kirstie Alley for being a Trump supporter.

“There’s the biggest controversy in our country right now,” said Nunn. “And she’s a f**king Trump supporter. That’s why she hasn’t said anything. I’m just not building the wall.”

“The President is disgusting,” she added. “I officially don’t like the Big Brother House President.”

Many viewers also took to Twitter to complain about the task.

One viewer tweeted: “This task on #CBB is very distasteful. It’s horrific. Wtf has happened to light fun bitchy CBB?” 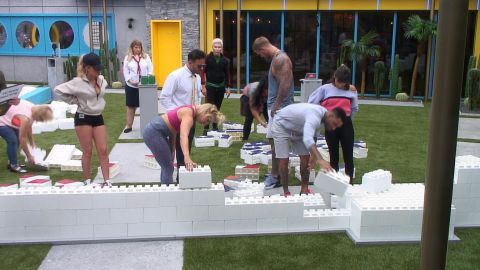 While another wrote: “This wall task is actually really crass and insulting. Trivialises the issue. Good on you Natalie for saying so.”

And a third added: “I really can’t believe I’m saying this but I completely agree with Natalie and her views I feel awkward just watching this! Who thought this task was appropriate?”