Home » TV & Movies » Celebrity Big Brother will see its first round of nominations tonight, but there's a twist

In news that should come as no surprise to any seasoned Big Brother fan, Celebrity Big Brother‘s first nominations of the series will involve a sneaky little twist.

In a sneak peek at this week’s nominations ahead of tonight’s (August 21) show, CBB revealed that President Kirstie Alley has been given the gift of a pardon.

Addressing the housemates, and her citizens, Kirstie said: “I can now reveal that I will be issuing one Presidential pardon to the housemate I think deserves it the most.”

President Alley’s pardon will “instantly” make the lucky housemate immune from this week’s eviction, but they’ll have to convince her why they’re worthy of it first.

Of course, nominations aren’t the only source of drama from inside the Big Brother house, as tensions between two celebrities have already heated up and boiled over. 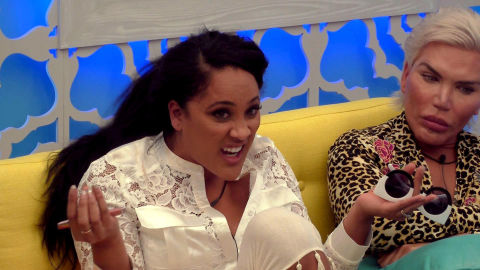 “I feel dead intimidated,” she told some of her fellow housemates. “She said stuff to me in front of other people and it puts me on the spot…”

When Jermaine Pennant suggested Gabby tell Natalie how her comments have made her feel, Gabby interjected: “She wouldn’t give a f**k… She would probably say I’m being dramatic.”