Pete Wicks got way too close for comfort with a killer shark while filming Celebrity Island, and it very nearly cost him his place on the show. (Not to mention his life!)

A life-threatening incident developed within a blink of an eye while Wicks and Olympic rower James Cracknell were fishing for their follow islanders and a shark became entangled in their net.

Before the TOWIE star could even react, the shark had clamped down on his hand and was trying to pull him underwater. It was a matter of do or die!

“I could not get this shark off my hand for love or money; we ended up wrestling for a bit,” he told The Sun. “Then after about three or four minutes of being in the water and going up and down I started getting a bit panicky because I lost the feeling in my finger, I thought my finger had gone.

“I thought, ‘Shit, what am I going to do?’ Then, the pain kicked in. The worst part of it was the clamping. It was like being in a vice; I could feel it tightening and tightening around my hand.”

Luckily, Cracknell came to his aid by cutting him out of the fishing net… but the shark’s mouth was still attached to Wicks’ hand!

“I remembered watching the National Geographic and how to get sharks to let go, you poke it in the eye, so I did that and it ended up releasing my hand,” he recalled.

When the shock subsided, the medics on the set were so concerned with Wicks’ injuries that Celebrity Island producers urged him to quit the competition and go home.

“There was no way I was leaving unless it was in a body bag,” he insisted. “They wanted to take me off The Island but I don’t give up on anything. I didn’t want to go.

“I broke my fingers and bent up like a banana and swelled up but on the island there’s not much you can do about it. 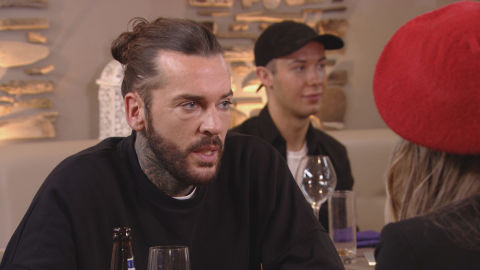 “My finger is still bent now and I don’t have much feeling in it – but I know that’s my fault for not leaving when they wanted me to. I wanted to prove I could do it no matter what. That was probably to my detriment because I’ve now got a weak pinkie.”

It has been a hugely eventful series for Celebrity Island, with the ever-controversial Roxanne Pallett quitting after the first episode and Paris Lees walking after conflicts with Eric Roberts.

The competition continues on Celebrity Island on Sunday night at 9pm on Channel 4.