John, 55, and his fellow Celebrity MasterChef judge Gregg Wallace, 56, usually discuss how the famous contestants should prepare their dishes for the pairs challenge. With the latter on hand to ask questions, the professional chef took the reins to show those at home how the all-stars should serve up the creation they have been asked to showcase. However, in Thursday night’s edition of the BBC cookery show, fans didn’t think the California roll sushi John had prepared was what they had envisioned in their mind.

Celebrity contestants Riyadh Khalaf, 28, and Pete Wicks, 31, were tasked with serving the judges a platter of sushi items.

This included the staple California roll, as well as prawn tempura, salmon nigiri and cucumber kappamaki.

With Gregg watching over him, John prepared each one by hand, with viewers able to take note as they watched to make their own at home.

As the Chinese delicacy has become so popular across the world, those watching at home have come to know how each type of sushi should look and be produced.

Though fans weren’t too convinced with what the chef had created as one wrote on Twitter: “What sort of California roll is that #celebritymasterchef.” 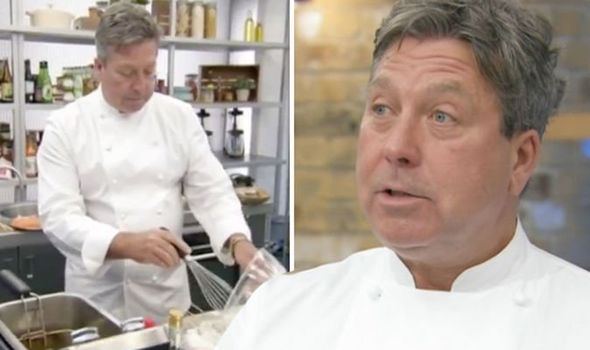 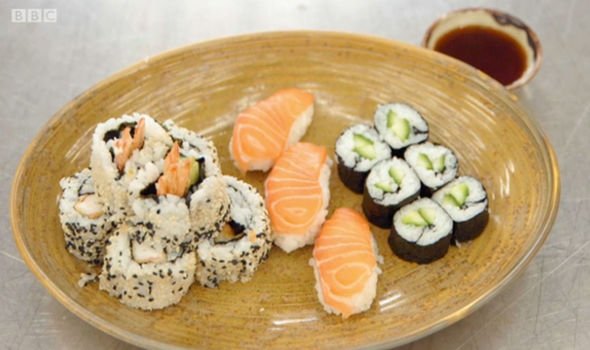 A fourth remarked: “Should someone tell John that what he made isn’t a California roll? #celebritymasterchef.”

Others posted about the difficulty of the challenge, with a sixth sharing: “This is absurdly difficult. #CelebrityMasterchef #MasterchefUK.” 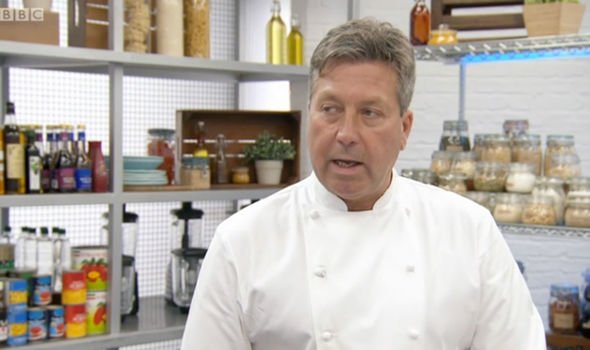 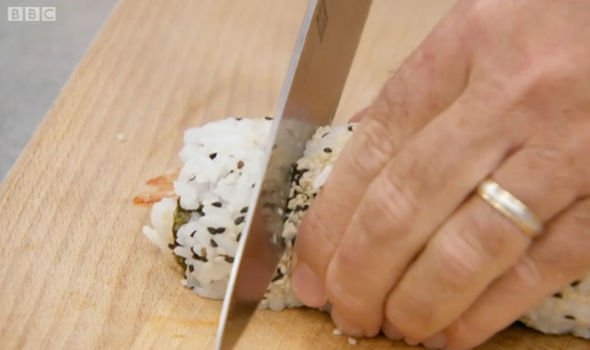 That’s not a California roll

Although the task was tense, both Riyadh and Pete managed to present a platter of sushi to the judges by the end of the challenge.

The contestants were hoping their servings would be identical, and despite looking quite similar, there were some obvious differences.

Gregg said on the first inspection: “The rolls on each plate look great, but we somehow haven’t managed to communicate the look of the plate.”

After eating one of Pete’s offerings, John was almost blown away as he tried some of the wasabi sauce.

“Cut back on the wasabi a little bit. I know you might like it but there’s a reason it’s on the side,” the judge commented.

“People can add their own if they want to,” he continued, before giving a more in-depth critique of Pete’s other elements.

“With sushi, the rice is very important – Pete, yours is just cooked. The tempura prawn rolls are just a bit big.”

However, the professional chef did like the contestants salmon nigiri, telling him he had “nice, small, dainty pieces”.

Whereas John didn’t like the wasabi, Gregg didn’t mind the heat and told Pete the quality of his California roll was “superb”.

Moving on to Riyadh, the professional chef could not have had more praise for his tempura prawn rolls and his California rolls.

Though he thought the broadcaster’s salmon nigiri was “massive” and a customer would struggle to eat the sushi element in one piece.

The BBC Radio One star was commended on the cooking of his rice and the presentation of his platter in general.

Viewers will have to tune in on Friday night to see if both celebrities will make it through to the semi-final as they take on Crissy Rock, 61, and Sir Matthew Pinsent, 49, one final time.

Celebrity MasterChef continues Friday at 8:30pm on BBC One.