Hell hath no fury like a Game of Thrones fan scorned – or Daenerys Targaryen, evidently – and now a quarter of a million of them are demanding the entire eighth season of the epic TV series be remade.

A change.org petition by fan Dylan D calls on cable network HBO to "Remake Game of Thrones season eight with competent writers". At the time of writing, it had been signed by more than  280,000 people (close to double the amount of Australians who watched the show on Foxtel this week). 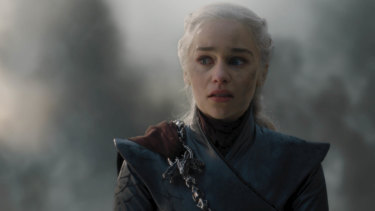 Emilia Clarke as Daenerys Targaryen in Game of Thrones’ The Bells.Credit:HBO

Many people who signed the petition have aired their grievances on the page's comments section, with most focusing on the rushed feel that the new episodes have delivered.

"The story fell apart, the characters became caricatures of themselves – and some worse: unrecognisable – and the world lost the cohesiveness and believe-ability it had maintained previously," wrote one.

"The cast and crew are amazing, my only issue is the rushed and lazy writing of this season," said another. "It goes against the entire show's spirit."

With just one episode left of the show, Benioff and Weiss have the unenviable pressure of restoring viewer satisfaction with around 60 measly minutes worth of television – but this close to the big finale, it looks like at least 280,000 of the show's fans think it's too late.

On the bright side for Benioff and Weiss, the criticism doesn't seem to have had too negative an impact on their standing in Hollywood. According to industry site Deadline, the pair are currently in negotiations with six major studios, all of whom are vying for global rights to their future collaborations.

As for Thrones, the story doesn't quite end here – after the finale this coming Monday, fans will a week later be treated to a behind-the-scenes documentary that explores how the nearly billion-dollar show came to life. A Game of Thrones prequel is also in the works, with Australian actress Naomi Watts attached to the project.

Game of Thrones' final episode will air on Foxtel and Foxtel Now on Monday, May 20, from 11am.