Is Hollywood ready for Asians to fall in love? Constance Wu, who charmed television audiences as the lion-hearted matriarch Jessica Huang in ABC’s Fresh Off the Boat and now stars as the female lead in Jon M. Chu’s big-screen rom-com Crazy Rich Asians, feels it’s about time people stopped asking that question in the first place.

Wu plays Rachel Chu, an Asian-American economics professor who travels from New York City to Singapore to meet her boyfriend Nick Young’s family — which turns out to own the most sprawling real estate empire in the hemisphere. The script is full of the classic clashes and conflicts that arise from meeting one’s in-laws, particularly if they’re fabulously wealthy. But the cast, setting and characters are anything but typical. When Crazy Rich Asians hit theaters on August 15th, it became one of the first Western wide-release films to ever tout an all-minority cast, let alone an all-Asian one. Debates about the movie’s place in the Hollywood canon have been roaring across the Internet for months, with essays and hot takes multiplying since its release.

To Wu, the territory is familiar. Thanks to her role on ABC’s game-changing all-Asian sitcom, which premiered to wide applause in 2015, the actress has been the de facto face of the push for more Asian representation in Hollywood for years — even once inspiring a hashtag meme, #starringConstanceWu, in which social media users Photoshopped her face onto movie posters for films like Lucy and Easy A to point out the stark lack of Asians in leading roles. Wu spoke to Rolling Stone about the brazen aspirations of Crazy Rich Asians and the uphill battle for diversity in the entertainment industry.

What was it like working on Crazy Rich Asians, coming from Fresh Off the Boat?
Totally different. The only similarity for me is, for some reason I was on the first network TV show in over 20 years to feature an Asian-American cast, and now I was leading the first studio movie in over 25 years to ever have an Asian-American cast. So it felt like a weird déjà vu. But you know, a lot of the people on Fresh Off the Boat either have children or are children, so that’s more like a job. You can’t be talking about getting wasted on the weekends with kids. Whereas Crazy Rich Asians felt like a movement. It was a passion project, it wasn’t just a job. I know for me, it felt like a calling.

What were the conversations like on set when you weren’t filming?
We would just talk about family and friends and dating and clothes, stuff like that. Though there were also conversations about realizing how so many of us were so used to being the only token Asian in whatever project we were in. 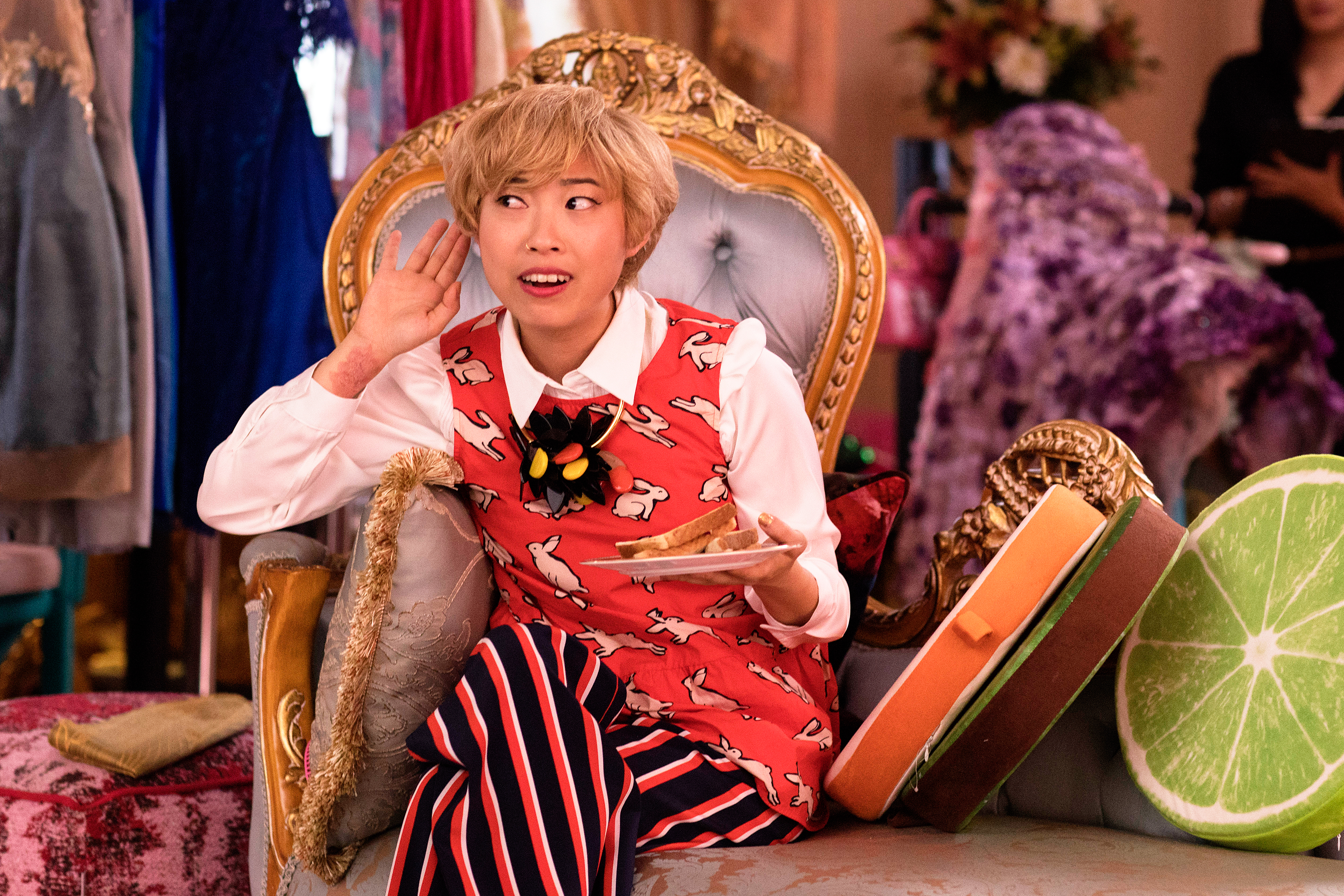 Jessica on Fresh Off the Boat is very different from Rachel in Crazy Rich Asians. What was that jump like?
Jessica I based very much off the real-life story of the actual Jessica Huang, who I met. When you come to the States or immigrate to any other country as an adult, all the things that have formed you environmentally, they pretty much become standard. Because Jessica grew up somewhere where she did see herself represented, she has the type of confidence that Rachel doesn’t have when she goes to Singapore. And her confidence is funny not because she’s a tiger mom. It’s funny because Americans have expectations of people who don’t speak English well or have accents; they make assumptions. So what’s special about Jessica is: Jessica doesn’t think her accent is any reason for her not to have a voice. Because she grew up in a place where she did have a voice. Whereas Rachel grew up in a place where she was not the dominant culture. She did not see herself represented in media. For myself and for Rachel, when you go through that, you wonder what parts of you are Asian and what parts are American. You’re sort of caught between, because you recognize elements in your identity of both. 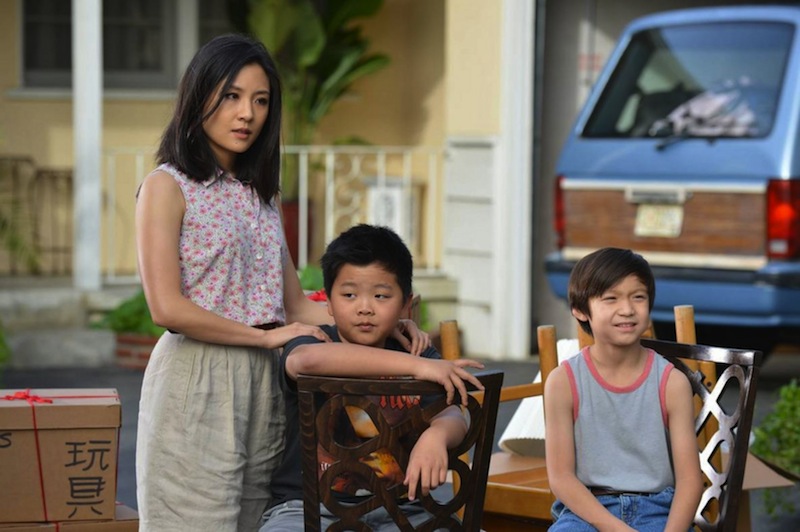 Wu as Jessica Huang in ABC’s ‘Fresh Off the Boat’

As the first major Hollywood film in a mainstream genre like romantic comedy with an all-Asian cast, Crazy Rich Asians is battling a lot of stereotypes. But there are others it seems to foster — images of Asians buying into Western culture and being materialistic, for example. How do you reconcile that with what you’re trying to do for Asian characters?
Stereotypes do not exist as bad things if they’re one small percentage of the whole. And the only way to have the whole is to have an Asian-American be centered in the experience. So, yeah, there’s the stereotype that Asian-Americans are nerdy math guys, but that’s because when they’re in the movie, they’re only nerdy math guys — they don’t have fights with their brothers and sisters, they don’t have dreams of becoming a jumping-rope champion or anything like that. You only have the space to tell an entire story of a person, stereotype or no, when they are the center of the story. My character in Fresh Off the Boat, Jessica Huang — if she had been a supporting role, then you’d get the highlights, and that’s not a whole person. Representation is not just checking off a box. It’s representing a life and all its facets. So I think the idea of stereotypes becomes a moot point once you have a project that centers that stereotyped experience.

So you don’t see the film’s Western consumerism as a problem?
Even though Eleanor [Nick’s mother, played by Michelle Yeoh] or Awkwafina [who plays Rachel’s Singaporean friend Peik Lin] have access to all these amazing designer brands, they do not exist merely to show off the brands. Eleanor dresses very refined, she has beautiful jewelry. But she has a history of being overlooked, as you see in the very first scene where they don’t let her into the hotel. So these ideas of wearing the things you’ve earned in order to be seen — those things have roots in the ways that dominant culture has treated Asian-Americans before. In that way, it’s not a stereotype. If you just say, “Asians like to buy Gucci” — yeah, because that’s all you’re saying. Not anything about inherited trauma or insecurity or all these very human things. You can only talk about that if that person’s the center of the story.

The movie has also been criticized for having multiracial actors playing Asian characters, like your co-star Henry Golding, who plays the Singaporean Nick but is half-white. How do you respond to that?
I think people get all in a tizzy because we finally get one leading Asian man. He can’t represent everybody! But I will say men do have the advantage. As much as Asian-American men are relegated to the sidelines, there are Asian icons on the posters on dorm room walls, like Bruce Lee or Jackie Chan. We don’t have an Asian-American female icon. We don’t even have an Asian icon, female, who’s reached the status where a picture of her can be on some random dorm room wall. It doesn’t exist. Sometimes people think Asian-American women don’t have problems because we’re often seen as desirable and sexual and romantic — and to that I say, not every woman wants that type of attention.

How do you think Asian audiences will respond to the film?
Well, I think Asians are not a monolith, you can’t lump them all together. If you ask Asians from the East Coast, they’ll say Asians from the West Coast are very different, versus Asians from Texas or Manhattan. I think the reaction from Asians will be positive because they finally have a story that is mainstream, studio-driven and shares the Asian-American experience. And then I do think people might be upset about it, because while it does share this experience, this experience might not reflect their own and they might still be looking for their story. But hopefully there will be more opportunities, because one story can’t represent the whole.

What was most important to you in bringing Rachel to life?
I know rom-coms had their heyday back in the Eighties and Nineties, and [Hollywood] tried to keep going with that, and the reason it didn’t work was that they took the paint-by-numbers approach. So I thought this has to be about something deeper than just a boyfriend-girlfriend romance. It has to be about identity and cultural misunderstanding, but also appreciation for each other, and those are clashes that not only happen in our movies but also throughout generations. It’s part of the struggle to understand people from different countries, classes, lifestyles, without putting a judgment upon them. When you try to express and explore that struggle, I think everybody relates.

When you think about the fight to have more Asians represented in Hollywood, is there a particular moment that you think you could look at and think: “We finally made it”?
I think it would be the icon status. When you have an Asian-American or British-Asian or Asian-Australian who is so iconic that some college kid in Germany knows who they are, like they know who Marlon Brando is, I will think that is a major turning point. There are some people that are just incredible artists, but they haven’t reached the status where everybody knows them. So I think we need to find a young icon out there to be a model for success. We don’t really have a model for success right now.

Well, it seems like this film could do a lot toward that goal.
I think it will. I hope it will, at least. We’ve stopped asking if Hollywood is ready. I think when you look at younger people, Generation Z, they’re not asking for permission — they’re creating their own kind of Hollywood. It’s their lives and their stories. So when Gen Z comes up and there’s some kind of icon in that generation, and they create their own content without needing permission, that’s when I will be like, Yeah guys, fuck, we made it, this is awesome! And it’s starting already.