Matt – played by Charlie Cox – was left crushed under a building at the end of team-up series The Defenders, and now, at the beginning of Daredevil‘s new season, his powerful senses are failing him and he’s presumed dead.

Speaking to Entertainment Weekly, Oleson explained that it’s not going to be the breeziest of seasons for Matt.

“Matt starts the season broken physically, broken emotionally, and broken spiritually,” he said. “He’s angry at God, he’s angry at the fact that he had risked his life to do God’s work, and he’s questioning whether or not he was a fool.”

Oleson added that Matt is faced with a choice as he struggles to choose between his regular life and Daredevil, with his powers diminishing.

“Matt goes to pretty much the darkest place you can,” he said. “When he realises that he’s incapable of being Daredevil, he would rather just end it than go forward in his life without abilities. 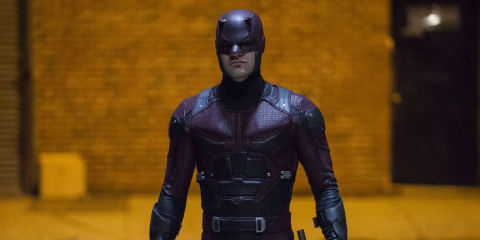 “He’s decided to set aside his Matt Murdock persona and just be the Devil, to isolate the lighter part of himself.”

Matt will also have to deal with Foggy and Karen’s reaction to learning he’s still alive. “If you thought one of your close friends was dead and he decided not to tell you he survived, you would probably have some issues with that.”

Daredevil season 3 will be available on Netflix on October 19.