Escape To The Chateau’s seventh series continues this weekend, but when Dick and Angel Strawbridge packed up and moved to France five years ago, they didn’t expect the show’s huge success. Along the way, the renovation of the 45-room Chateau de la Motte Husson has not been plain sailing and despite growing closer through the process, the husband and wife duo apparently “argue every day”.

Originally bought for £280,000, Dick and Angel got to task with transforming the rundown 18th-century Chateau into a luxury wedding venue, estimated to now be worth £2.5million.

With no sewerage or pipework, electricity was also non-existent, meaning the couple had a mammoth task on their hands.

But from the very moment she stepped inside the building, Angel had specific ideas and dreams for each individual space.

It has been up to Dick to help her put pen to paper and then execute most of her plans. 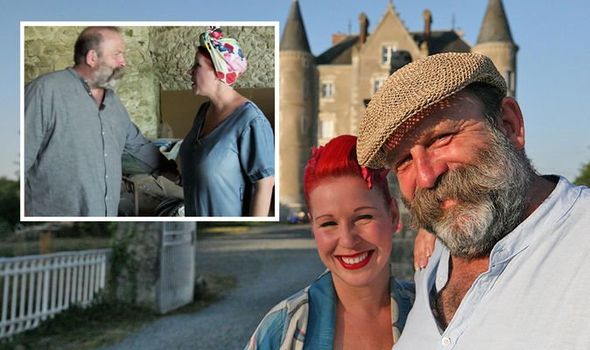 Naturally, the two have clashed, with differing opinions and ways of working, and their relationship has been strained from time to time.

“We argue all the time, every day,” Angel said. “But you’ve got to be passionate and we are both madly in love so there’s no point getting hung up on silly little details.

“If you asked me what we argued about yesterday, I’d have no idea.

“Argue every day and drink gin at night with a smile,” she added. 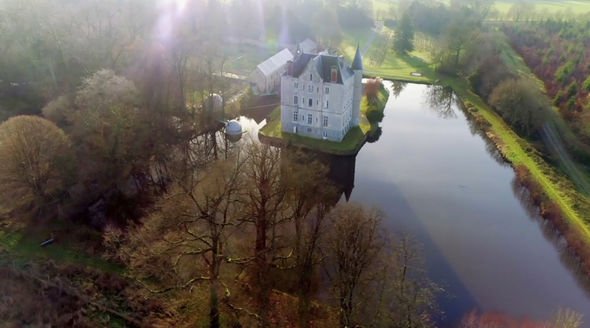 As for how the renovations are going, Angel said she doesn’t think it will ever “be properly finished” but she’s okay with that because they “have lots of working toilets now”.

“We are saving for the next big jobs, like the chateau roof and the [seven] outbuildings,” Angel detailed.

“But we are going to die here, because it’s our forever home. We’re never selling it,” she remarked to The Sun.

“You don’t put this much love and investment into something if you’re planning on not living here, or selling it.”

Dick added: “The house is evolving and things are being moved around to how they were always meant to be and we have endless outbuildings.”

One thing which has “evolved” is their ‘Pepper Pot’ tower, which was transformed in the second episode last weekend.

The Chateau’s turret is a space Angel had envisioned as the family library.

She got Dick to work with measuring and building shelves for wonky walls.

In the end, Channel 4 viewers were marvelled at the impressive outcome.

Grateful for his hard work on the library, Angel and their children presented Dick with a rare cookbook by Francatelli.

Dick was so overcome with emotion he struggled to fight back tears as he flicked through the first edition book.

Escape To The Chateau airs Sunday at 8pm on Channel 4.