Georgia's long-standing and lucrative relationship with the Walt Disney Co could be headed for a break-up over the state's new, restrictive abortion law.

For years Georgia has been a vital production hub for a string of Marvel Studios blockbusters because of its rich tax incentives and state-of-the-art studio facilities. Disney films such as Black Panther and Avengers: Endgame filmed there. 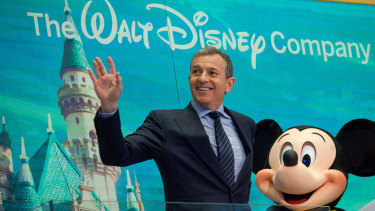 Disney’s Bob Iger said the company may move production out of Georgia.Credit:Bloomberg

Georgia is one of many states that have recently passed antiabortion laws meant to eventually challenge Roe vs. Wade at the US Supreme Court.

Studios have a lot to lose if they bail out of Georgia. The state is known as the "Hollywood of the South" and is attractive to studios because it offers ideal weather and tax credits of up to 30 per cent for films, television shows and digital features that are shot there.

The state hosts an average of 30 to 40 productions at any given time, including Netflix's Stranger Things and AMC's hit series The Walking Dead, according to the Georgia Department of Economic Development.

With so much at stake, the largely liberal entertainment industry's response to Georgia's law has been surprisingly muted so far. Despite calls for a broader production boycott, the business' reaction has paled in comparison to earlier threats to abandon Georgia because of a 2016 religious freedom bill that was viewed as anti-gay.

But pressure has been mounting on Disney and other studios to take a position. Several producers, including Mark Duplass, Nina Jacobson and David Simon, pledged to not film in the state. Other big-name producers, including J.J. Abrams and Jordan Peele, who are making the show Lovecraft Country for HBO in Georgia, said they would continue their productions there, but donate "episodic fees" to organisations fighting the abortion ban.

The Motion Picture Association of America, the trade group that represents the studios, said it would "monitor developments", and it appeared that most companies were taking a wait-and-see approach as the new abortion laws faced court challenges.

However, it appears that some of the industry's reticence is beginning to abate.

Netflix chief content officer Ted Sarandos, in a statement to Variety, also raised the prospect of leaving Georgia if the law survives the courts.

"We have many women working on productions in Georgia, whose rights, along with millions of others, will be severely restricted by this law," Sarandos said. "Should it ever come into effect, we'd rethink our entire investment in Georgia."