There was a drugs scam and another disturbing Stuart Halfway twist in Tuesday’s EastEnders, but viewers were most concerned with a wool cap.

In Tuesday’s episode, Halfway (Tony Clay) and Shirley Carter (Linda Henry) tried setting up a meeting with Stuart (Ricky Champ) while the other Carters were away, but the villain wouldn’t respond to their messages.

When they went over to his flat, they were disturbed to find it abandoned — aside from a family photo where Halfway’s face had been scratched out. Shirley managed to nick the photo before Halfway could see it. 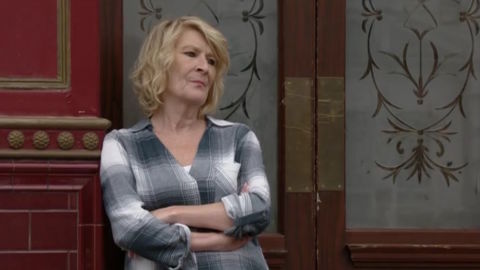 With Halfway waiting at the flat for Stuart, a concerned Shirley urged Whitney Dean (Shona McGarty) to convince Halfway to walk away from his brother once and for all by showing her the troubling photo. Can she get through to her one-time boyfriend?

Actually, fans had a more pressing question: why was Halfway wearing a wool cap in the hot August sun?!

Another hard-hitting storyline began on Monday (August 6) when Keanu (Danny Walters) left Dennis (Bleu Landau) to fend for himself while he was supposed to be watching him, and the boy fell in with a local gang.

Last night’s episode ended with Keanu finding Dennis’s rucksack, and discovering a load of stolen mobiles — but Keanu got the wrong idea and assumed that it was one of Phil Mitchell’s (Steve McFadden) dodgy scams. 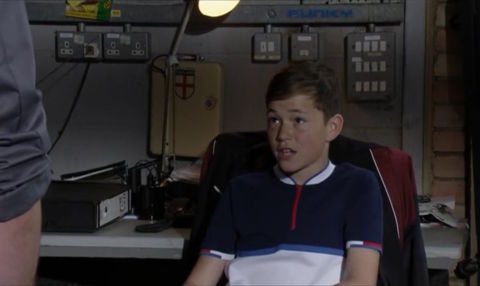 When Dennis was the one turning up to collect the bag, Keanu was stunned, but he acted quickly by threatening to call the police when the gang arrived on the scene for their stolen phones. Luckily, a clueless Phil intervened in time to chase off the gang, thinking they were bothering Keanu.

The grudge was anything from settled when Dennis soon received an ominous text from the gang warning him that they’d be coming back, while Keanu was gobsmacked to discover that there were also drugs in the rucksack.

Viewers are worried that Keanu and little Dennis are in way over their heads:

Keegan Baker’s (Zack Morris) own troubles with the Walford gangs continued, in the aftermath of Shakil’s death. Still struggling with his grief, Keegan was triggered in Tuesday’s episode as local hoods taunted him while stealing a bike (just as Shakil had done).

He tried to put his troubles behind him by agreeing to fill in for Hunter Owen (Charlie Winter) at Ian Beale’s (Adam Woodyatt) restaurant when irresponsible Hunter once again didn’t show up for work. 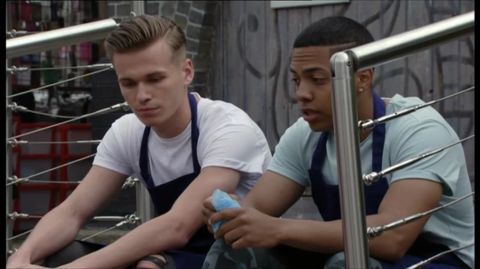 However, Hunter ultimately turned up late as usual, forcing the rivals to work side by side. The two bumped heads at first, but Hunter showed a surprisingly sympathetic side when he accidentally triggered Keegan’s memories of the stabbing when he pulled out a knife to peel vegetables.

Hunter finally made amends for his past misdeeds, and proved to be a surprisingly supportive friend in a time of need for Keegan.

EastEnders continues on Thursday (August 9) at 7.30pm on BBC One. 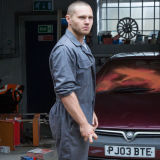 Digital Spy Soap Scoop video – hit play below for all the latest EastEnders spoilers, as Dennis sparks trouble with a gang and Rainie struggles with her feelings for Max.