Home » TV & Movies » Emmy First-Timers Club: Why Rain Valdez Is Creating Trans Roles No One Else Will 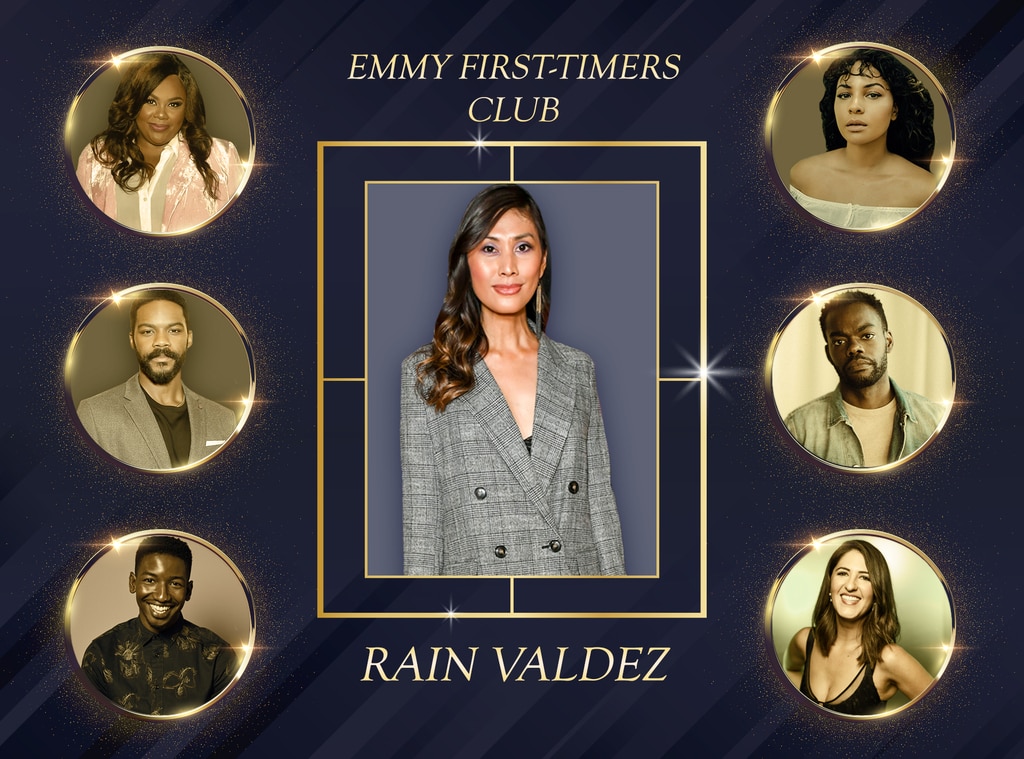 You never forget your first. For a lucky handful of TV personalities, that time is now. Get to know the names behind the nominations with Emmy First-Timers Club, E! News' weeklong celebration of newcomers with nods in some of the biggest categories!

When the actress learned she was nominated for Outstanding Actress in a Short Form Comedy or Drama Series at the 2020 Emmys for her work in the web series Razor Tongue, the moment secured her spot in the record books as not just the second transgender performer ever nominated in an acting category—following in friend Laverne Cox's footsteps—but the first Filipinx-American ever.

In response to what she believed to be a lack of quality roles for trans performers, she created Razor Tongue herself—making the recognition even sweeter.

As Valdez processed the news of her historic nomination in late July, the multi-hyphenate took to Instagram share her thoughts. "I ain't mad about any of it and I'm celebrating all of my identities with this nomination. My transgender identity and being AAPI," she wrote. "And to my rockstar team @noweverartists that helped me make Razor Tongue, this is also a celebration of what we created, a recognition of our communities capabilities and competency, and I can't wait to create more with all of you."

While we await the results of Valdez's category, which will be revealed during night four of the Creative Arts Emmys on Thursday, Sept. 19, get to know the trailblazer a bit better with her thought-provoking responses to our Emmy First-Timers Club questionnaire.

Whose performances inspired you to become an actor?

I grew up loving romantic comedies. So anything Julia Roberts or Sandra Bullock did, I acted out in my bedroom. I also loved Audrey Hepburn in Roman Holiday. She cut her hair short and ran around being very adventurous while hiding this secret. It reminded me so much of myself and of my secrets. I remember thinking, "I can do that." So I cut my hair really short, which got me into a lot of trouble with my mom. But I didn't care, I wanted to be Audrey.

What was the last non-acting job you held?

Prior to COVID, I was working with a prominent director, which helped me learn so much more about the industry. I also teach the first and only LGBTQ+ acting class in Los Angeles. So when I'm not acting, I love teaching. In terms of non-industry-related jobs, I haven't needed to wait tables or cater in a little while, which feels good. Those types of jobs are so great though, because of that flexibility it allows you to go on auditions. I'm very grateful to have had those jobs.

Inside Cardi B's "Shocking" Decision to File for Divorce From Offset

What TV show other than your own have you never missed an episode of?

I grew up watching Ally McBeal and have since binged it twice as an adult, so definitely never missed an episode—three times over! Ally (Calista Flockhart) was funny, quirky and romantically hopeful, all while struggling with her mental illness, but without stigmatizing it. I saw a lot of myself in her. I loved that it was the first show that had a gender-neutral bathroom. That blew my mind. They also had an amazing actress (Lisa Edelstein) play a trans woman. It really warmed my heart when Ally and Ling (Lucy Liu) corrected people whenever someone would misgender her. I loved it. It was so ahead of its time and different from how most TV shows and films treated trans women.

The TV show based on my life would be called:

I've actually thought about this before. It would be called The Princess of an American Island. It would tell my journey from being born in the Philippines and then being raised on an island (Guam) until I was old enough to move out and to the United States. It would absolutely be in the rom-com genre with a lot of surrealism. It would be a really fun show that centers a transgender character and a Filipina American family in the pursuit of love and an American dream.

When was the first time, if ever, you remember seeing yourself represented on TV?

In Netflix's documentary Disclosure, I talk about my experience in seeing a transgender actress for the first time, which was Cathy Moriarty's character in Soapdish. The way she was vilified and shamed made me fear for my life as a trans woman. Unfortunately, that kind of negative portrayal was the norm back then. As an Asian-American transgender woman, I never saw anyone like me represented on screen. But as a woman, I saw a lot of myself in the actresses I loved and admired. The lack of accurate transgender representation made me feel like it was something I needed to erase from my past. Fortunately, I was able to embrace it and be a part of the movement to create the kind of representation we need.

What do you want to see more of on TV?

I want to see more transgender women and men in loving relationships. I want to see trans women in romantic comedies. Rom-coms are propaganda for who gets to be loved. For decades, we've been telling the world that those who get to be loved are white, cisgender, moneyed and heterosexual. Trans people have yet to be afforded this kind of aspirational narrative and I think it's time.

What was the first thought that passed through your mind when you learned you were nominated?

I think the first thought was "Oh my God, I think I'm nominated!" After that, it was just all feelings. I was shaking a lot. I cried a lot. It felt very victorious, but also very surreal. I wasn't really sure what I was supposed to do, so I just started calling everyone. My team, my friends and family. I knew it would be a big deal with my community because this rarely happens to any of us, so it was a lot to process. I'm still processing it now, in a good way, without all the shaking!

How did you celebrate your nomination?

Well, I danced every night for about a week. My birthday was the following Sunday so I had a socially distanced pool party with very close friends. We had BBQ and cake. It was really special celebrating my nomination and my birthday with my close friends. It was the best birthday gift ever.

Where will you put your Emmy if you win?

Oh gosh, I haven't really thought about that. If it happens, I'll definitely find a special place for it, but, honestly, I'm still celebrating the nomination. When I hear actresses say "I feel like I've already won" after being nominated, I know what that means now. It really feels like I've won big and, in a lot of ways, I have.

To see if Valdez takes home the hardware, be sure to tune in to night four of the 2020 Creative Arts Emmys as they stream live on Thursday, Sept. 19 at Emmys.com.

For more from the Emmy First-Timers Club, check out responses from Nicole Byer and be sure to check back with E! News every day through Emmy Sunday on Sept. 20!