The Grey’s Anatomy spinoff, Station 19, airs immediately before the 9 p.m. Grey’s slot. The firefighter series is in its third season and includes some overlapping characters with the original show. Many of Grey’s Anatomy‘s fans do not want to watch the new show, but might miss backstory on their beloved characters. This week we learned what is going on with Ben Warren (Jason Winston George). 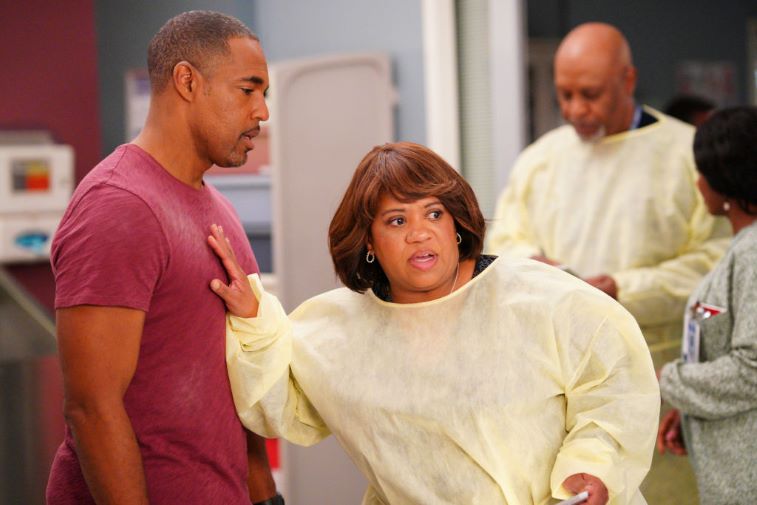 The episode opens with Warren acting reasonably normal—and then he loses his impulse control, as usual. At first, he is merely taking care of a teenager with a stolen hoodie on. The firefighter tries to get the kid to open up about what happened to set the grocery story on fire.

“I was like you once. I did some crazy stuff, too.”

Warren gets the kid, Tyler, to confess to what happened in the grocery store. We find out that Tyler and his friend set off fireworks inside the store on a dare. The firefighter gets worried when he hears that the boy’s friend is still inside the burning building. He runs back into the store without his helmet.

“Warren, you are not properly protected,” a fellow firefighter tells him. “Don’t go in.”

His fellow firefighters continue to demand that Warren leave the building. However, he does not listen. The firefighter continues searching for the 14-year-old boy. He finally finds him hiding in a storage container, badly burned. Warren carries the boy out of the fire, and we assume we will see this teenager again soon on Grey’s Anatomy.

“Can’t save anybody if we show up dead,” Warren remarks as he is driving the fire truck very carefully, although the sirens are on.

Then there is a flashback to Warren as a child with two other teenage boys. They steal their friend, Danny’s dad’s car. Warren sits in the back of the vehicle with the top down, no seat belt. He stands up with his arms out while his friend drives as fast as he can. Then Danny slams on the breaks. Warren dares the friend to do the same thing.

After they switch seats, a deer runs out in front of the car, and they run the car into a tree. Their friend Danny is thrown from the vehicle. When they find him, he has a massive gash in his head and looks like he’s dead. Danny ends up hooked up to machines for the rest of his life.

“How long will you sit here, Benjamin?” Danny’s mother lectures Warren. “Days? Weeks? How long do you think I’m going to sit here? For the rest of my life probably. I just hope you think now. I hope and pray that you never ever do this to your mother.”

In the present, the firefighter goes to visit Danny, who is still in a hospital bed hooked up to machines. Warren tells him that he put away his adrenaline chasing for a while because of Danny.

“Anesthesiology, everything I do in my life, it all comes back to you,” Warren tells Danny. “I’m trying to save you. Put your skull back together. I’m a firefighter now. I’m first on the scene. I still hear your mom’s voice in my head.”

After visiting his friend, Warren goes to Sullivan (Boris Kodjoe), who is top of the list to be the new Chief Battalion of Station 19.

“I’m brave, I’m smart, I’m capable, and I’m tired of apologizing for that,” Warren tells Sullivan. “I think every minute of my life has led me up to this point. I am a surgeon who is also a first-responder. You want to impress Dixon? I’m your shot!”

The firefighter finally embraced his past and has found his purpose. It might mean that he continues to run into burning buildings, but he also might save even more lives this way. We wonder what his wife, Miranda Bailey (Chandra Wilson) will think of this decision.

Tune in Thursday night for the next Station 19 episode at 8 p.m. ET. If you are strictly a Grey’s Anatomy fan, look for this update again next week for your Station 19 (Grey’s characters only) recap.