When Netflix announced Matt Groening’s Disenchantment, they ordered 20 episodes and the first batch of 10 episodes arrived on August 17, 2018 as “Part 1”.

It meant that Groening and the other writers were safe in the knowledge they could set up mysteries across the first season, knowing they had at least another 10 episodes to answer any major questions and they took full advantage.

The season one finale delivers some huge revelations that shape how the show will go in season two – or Part 2 if you prefer – and we’ve rounded up five of the biggest mysteries heading into the next 10 episodes. 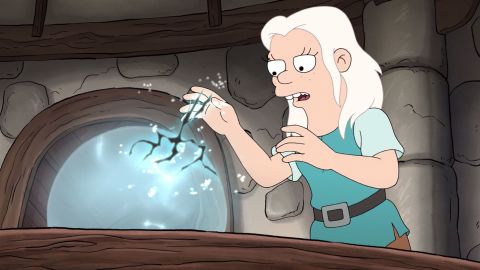 After Bean’s mother Queen Dagmar is brought back to life (more on that in a bit), King Zøg confronts her over her attempt to poison him years before. She doesn’t exactly apologise for it, only saying: “This goes way beyond you and me, dear. It is the dark battle of a hundred centuries and our daughter’s destiny.”

Earlier, we got a hint that Bean had some previously-unknown powers when she is shocked by the crystal ball, so could they be part of her destiny? “You, and you alone, are the key to the future of this kingdom,” Queen Dagmar later tells Bean, before pushing her off the castle and making her swim to a boat filled with all sorts of creatures.

They then set sail “for the homeland and a glorious future”, so the kingdom Queen Dagmar was referring to might not be Dreamland.

Season two will likely see Bean realise that it was her mother, and not her stepmother Oona, that was behind the attack on Dreamland. That doesn’t guarantee that Bean will side with her father though, even when she discovers her mother’s true nature. 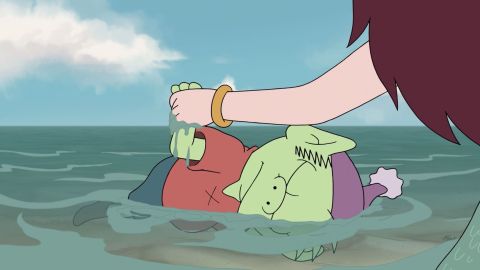 In the penultimate episode, Elfo is fatally wounded by an arrow after an attack on Elfwood by King Zøg’s knights. During the battle, Bean manages to get a drop of genuine elf blood meaning that she can use the elixir of life to bring back either Elfo or her mother Queen Dagmar. She chooses her mother and Elfo’s body is later swept out to sea during his funeral.

The post-credits scene sees Elfo’s body dragged away by unseen figures and if you look closer at the bottom right of screen, one of them is seen to have scales. In episode two, we were shown that there’s a place in Disenchantment‘s world called Mermaid Island, so it’s possible that Elfo was brought to shore by a mermaid.

His resurrection could tie into the mystery surrounding his mother as, before his death, Elfo’s father – Pops the Elf – revealed that Elfo is actually a half-elf and was about to show him his mother until King Zøg’s knights attacked. It’s unlikely that the show would set up this mystery only to never revisit it, so expect Elfo to come back to life in season two and find his mother – or at least understand who she was.

3. Why did Queen Dagmar turn Dreamland to stone? 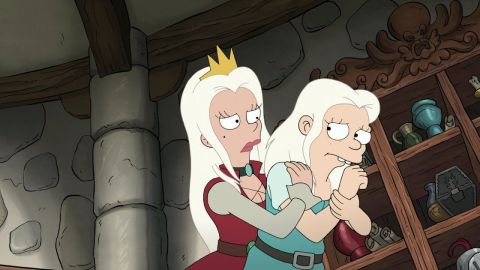 One of the biggest revelations in the season one finale was that it was actually Queen Dagmar who tried to poison King Zøg and turn him to stone. It was initially thought that she just happened to drink poison intended for him when a young Bean inadvertently switched the glasses around, but Queen Dagmar wanted King Zøg out of the picture for reasons not yet clear.

Likely she just wanted to ensure that Bean would be the one and only heir to the throne of Dreamland, yet what’s less clear is why when she was resurrected, she decided to turn the entire kingdom of Dreamland to stone. Could it be that Queen Dagmar is working with Emperor Cloyd and the Enchantress from the city of Maru?

The duo were responsible for sending Luci to Bean as a wedding gift, intended to disrupt her life, and after Bean is successful in getting the Eternity Pendant, they are seen toasting to “the end of Dreamland”. The people of neighbouring city Cremorrah were wiped out by Maru’s use of a stone potion, so it’s not a stretch to say that’s where Queen Dagmar could have learned it from, but we’ll have to wait until season two to find out. 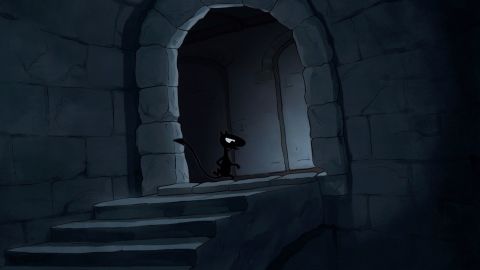 Shortly after Queen Dagmar launched her attack on Dreamland, Luci is mumbling to himself in one of the castle’s staircases that he should “be the one killing everyone”. He then pops into a room where he’s surprised by an unseen foe, but definitely one he knows, before we hear a ‘pop’ sound and don’t see what happens to Luci.

It’s likely that this is the exorcist Big Jo, Luci’s old foe, who tried to kill Luci in episode three by throwing him into a volcano, only to lose an arm and end up in the volcano himself. He returned with a vengeance in the eighth episode and wanted the Eternity Pendant for himself but, you guessed it, he was overpowered again, lost his replacement arm and then buried alive.

Since Big Jo has come back from falling into a volcano, it’s not a surprise that he survived being buried under a desert’s worth of sand in Cremorrah, so we can’t imagine it was anyone else who’d want to trap Luci in a jar (again).

5. Why are Odval and Oona working together? 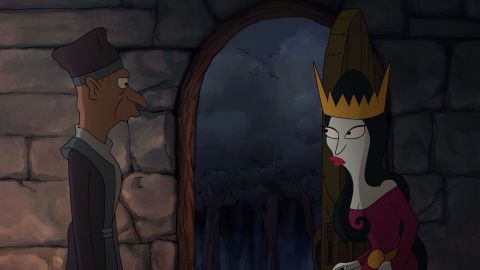 Before it’s revealed that Queen Dagmar is behind the attack on Dreamland, all signs point to it being the work of Bean’s stepmother Queen Oona. She married King Zøg to create an alliance between Dreamland and her kingdom Dankmire, so it’s no surprise she’s not impressed to be seemingly ousted when Queen Dagmar is resurrected.

Queen Oona doesn’t seem to be working on her own either as there’s a mysterious meeting between her and Dreamland prime minister Odval. “We will send a message to Dankmire of the utmost urgency. Not a word of this to anyone, the Royal Family would not approve,” Odval tells Queen Oona, leading her to ominously reply: “They will all pay.”

She’s not seen again, so we can assume that she escaped being turned to stone (unlike Odval) and is on her way back to Dankmire. Perhaps Odval knows more about Queen Dagmar’s true nature and was just making moves to prevent war with Dankmire or he’s just being a classic politician and playing both sides to ensure he survives.

Season two should delve deeper into Odval’s mysterious ways and whether Queen Oona will be back to save Dreamland.

Disenchantment is now available to watch on Netflix.