Home » TV & Movies » 'I know my value': Bachelor intruder not interested in being a mean girl

It's got to be tough being Nick "Honey Badger" Cummins. With 13 beautiful women already falling over themselves for him on The Bachelor, he'll soon have to contend with three more. Yes, it's time for the intruders to make their arrival.

On Wednesday night, three women – Deanna Salvemini from Adelaide, Brittney Weldon from Brisbane and Jamie-Lee Dayz from Sydney – will surprise Cummins, while he's on a group date with the original bachelorettes.

The intruders' arrival is designed to ruffle the feathers of the women who've already laid claim on the Honey Badger, but Bondi resident and venue manager Dayz, 27, says she doesn't have a game plan for her arrival – and she's more interested in making friends than enemies.

Originally thinking she was going on the show as a regular bachelorette, Dayz says finding out she'd instead be an intruder was intimidating.

"Obviously that was super nerve-wracking… it adds a whole new element to things. The main thing I was worried about was the other girls; I didn't know if they were going to be lovely or really nasty."

Fans of the series will know that each season comes with its own casting dynamic, with the bachelorettes usually divided into two groups: the "villains" versus everybody else.

Dayz promises she'll be part of the latter.

"I knew going in that I was going to be up against a few other incredible women and I was all about empowering [them]. I'm not going to be nasty or compete with anyone, so with that frame of mind I was never going to be a mean girl," she says.

"Everyone is on their own journey, and if someone's got a connection [with Cummins] then I am not going to see that as a threat.

"I know that in past seasons the girls have become really close friends and I was kind of hoping that I would get that chance as well."

As peachy as that sounds, there are some tough competitors in the show this season – and headline-grabbing bachelorettes Romy Poulier and Cat Henesy are unlikely to take kindly to a new threat when it all unfolds on Wednesday night. 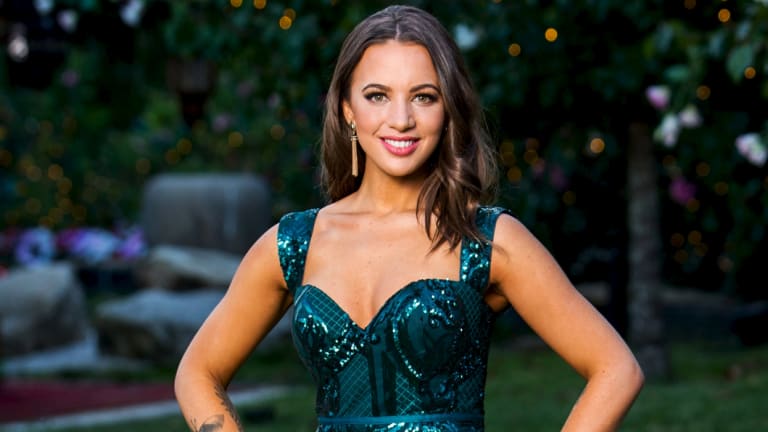 Jamie-Lee Dayz makes her entrance on The Bachelor on Wednesday night.

"There were some mean and nasty girls and it wasn't the nicest, but there were also some amazing girls to balance that out and that was my saving grace." (Dayz names Brooke Blurton and Cass Wood as the two women she bonded with the most.)

So, does Dayz see herself as a threat to the women who got a jumpstart on her?

"I am really proud of who I am and I am really confident as a person," she says. "I know my value and my worth… I think I was a threat because I add a new element to things. In saying that, I wasn't a threat in a nasty way."

Dayz admits she knew she'd be meeting "the Honey Badger" on the day she arrived – but says she had no idea who that was.

"I was given the opportunity to research and figure out who he was, but I went out of my way to not learn anything more," Dayz says. "I wanted to get to know the person in front of me as opposed to this person who's written about in papers."

And as for that all-important connection? Dayz says she and Cummins "definitely" had it. "I'm so ready to find that best friend-person for me," she says. "I came into this so ready to connect, and hopefully meet the person of my dreams."

The Bachelor intruders arrive on Wednesday night at 7:30pm on Network Ten.