Home » TV & Movies » Is the New Tom Hanks WWII Movie 'Greyhound' Based on a True Story? 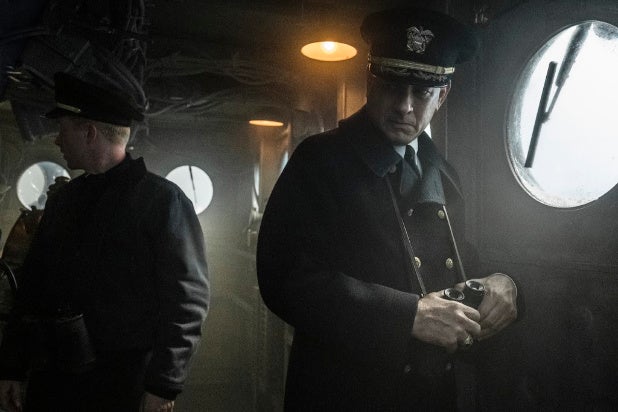 The World War II subgenre of films has been going strong pretty much since the war itself ended 75 years ago. And now the  Apple TV+ streaming service has given us the latest entry in that subgenre: the Tom Hanks naval thriller “Greyhound,” about a newly minted commander leading a convoy of ships in a dangerous journey across the Atlantic Ocean.

Hanks’s character, Captain Krause, is a longtime Navy officer, but he’s taking part in war for the first time in the wake of Pearl Harbor. His job: escort a convoy of supply ships across the Atlantic Ocean and defend them from Nazi U-boats if necessary.

It is necessary, of course. Otherwise, “Greyhound” would be a pretty boring movie. But is this story something that actually happened? Was Captain Krause real?

“Greyhound” is actually based on a 1955 novel called “The Good Shepherd” by C.S. Forester. And no, it is not a true story. The novel, and film, are a fictional yarn about a non-fictional scenario. What you see in the film is the type of situation that many ships and convoys faced as the U.S. and Canada shipped supplies to Great Britain throughout the war. But these specific characters and ships did not exist.

In a sense, “Greyhound” is sort of a fictionalized summation of the Battle of the Atlantic, which is the catch-all name for all the fighting that took place in the Atlantic Ocean during World War II. From the very beginning of the war, Britain received supplies from North America, with the U.S.A. chipping in even before it officially joined the war when the Japanese attacked Pearl Harbor.

The journey across the Atlantic for these ships was a fraught one, with German U-boats often swarming these supply convoys in the portion of the Atlantic known as the “Black Pit” — that’s the part of the ocean that was beyond the reach of British air forces. This is, to be clear, most of the ocean, though U-boats could only travel so far themselves.

Those U-boats took out thousands of ships during the war, so they were a very real threat to any convoy making the Atlantic crossing.

In the novel, though fictional, Forester was essentially creating an ideal scenario that described what it was like for Allied sailors during the Battle of the Atlantic. And the film is a very clinical adaptation, focusing almost entirely on how the crew of the Greyhound deal with the moment-to-moment action as they face off against a squadron of U-boats.

Basically, it’s not a literally true story, but the broad strokes certainly played out over and over during World War II.

“Greyhound,” which is an Apple TV+ exclusive from Sony Pictures, was directed by Aaron Schneider and was actually written by Tom Hanks. In addition to Hanks, the film stars Rob Morgan and Stephen Graham. It hits Apple’s streaming service on July 10.