Home » TV & Movies » ITV GMB: ‘I was beaten to a PULP’ Piers Morgan drops bombshell over The Chase filming

Piers Morgan, 53, is known for voicing his opinion on Good Morning Britain but does hold his hands up when he makes a mistake, although it can be through gritted teeth.

However, the ITV Presenter was more than happy to discuss the struggles he faced when filming for the Good Morning Britain edition of The Chase recently, which he will be starring in alongside co-host Susanna Reid, 48, and colleagues Kate Garraway, 51, and Richard Arnold, 49.

Although the presenters couldn’t discuss the episode in depth or reveal the conclusion, Piers explained the “pain” he felt when it came to answering one particular question.

Referring to the moment in question, Piers remarked it was “a real little zinger,” adding: “[I] don’t think most people would have got the question.”

Describing his reaction to getting the question wrong, Piers continued: “So it threw me and then suddenly I was in a world of pain.

“I’ll probably never recover,” the host went on to say later on in the segment, before adding: “I say one or two things that were so monumentally stupid.

“I got back up off the floor – and it was the floor. I was lying on the floor beaten to a pulp and trembling under the weight of the pressure,” Piers joked.

Susanna also spoke about how she felt filming the special episode, admitting she felt nervous with Piers adding his co-host was “shaking” under the pressure.

Piers remarked: “She turns out to be a little brain box,” before concluding the discussion on the filming by adding: “You have more of a reason to smile than we have,” stating Susanna had no reason to be nervous. 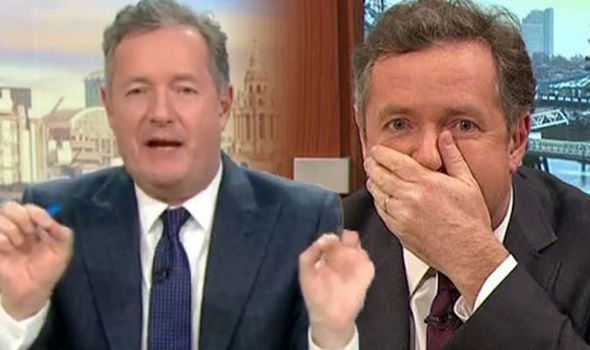 The celebrity edition of the ITV quiz show hosted by Doctor Who star Bradley Walsh, 58, will air in the Autumn and with the stars of the news programme wearing poppies in first-look pictures, this suggests the episode will broadcast around Armistice day.

“Wow… to say it’s a lot easier watching at home is the understatement of the century. Great fun though. Airs in the autumn…” the post continued.

Speaking about filming the show on yesterday’s instalment of Good Morning Britain ahead of the taping, Piers said: “We’re going to film the Celebrity Chase today, although celebrity is a word that doesn’t apply to all of the panel.

“We’re all a bit worried. We all began watching it a few days ago and we can’t get any of the questions right,” seemingly hinting at the struggle he would face.

With MPs divided over whether to hold another referendum after the Brexit deadline was pushed back earlier this year, Rachel said: “At the moment, we’re all in a log jam because both main parties are in hock to their ideological extreme ways.”

However, Piers interjected and told Rachel, who is campaigning to remain in the European Union: “You want the direction of travel changed to the one you voted for,” to which she hit back: “Let me finish the sentence.”

“We do want that. We want to have a people’s vote,” Rachel added, before Piers jumped in again to say: “We’ve had a people’s vote?” with Rachel once again hitting back: “The last time I looked Piers, you were remain, you’ve changed to leave,” leading to more disagreement between the pair.