Forget the apron! Kim Kardashian recently whipped up some tasty treats in just her bra and panties.

The Keeping Up With the Kardashians star shared an Instagram photo of her evening “bake sesh” on Thursday. The photo showed the reality star scraping off chocolate batter from a spoon while donning her matching undies set.

It also showed off Kim’s luscious long locks. Earlier in the day, the KKW Beauty head revealed she’d ditched her cute bob and returned to her longer ‘do because she “couldn’t take it.” Kim had debuted her shorter style at a charity poker tournament for City of Hope earlier this week. 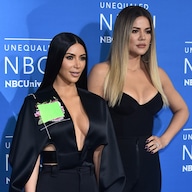 However, things weren’t just heating up in the kitchen. Kim also used a fire filter to post a cute video of her and her son Saint West.

“It’s crazy!” the 2-year-old tot adorably said in the clip.

In addition, things got a little heated on Twitter when social media users reacted to a feud Kim had with her sister Kourtney Kardashian on a recently teased episode of Keeping Up With the Kardashians.

In the upcoming episode, Kim organizes a photo shoot for the family’s annual Christmas card; however, Kourtney is firm on leaving the shoot by 4:00 p.m. Kim fires back at her older sister for not trying to comprise on the time, claiming “no one wants you in the f–king shoot.” After Kourtney storms off, Kim describes her sister as “the least exciting to look at”—a comment that later brought Kourtney to tears.

When a Twitter user came to Kourtney’s defense and said the eldest sister is “done living this Kardashian life,” Kim fired back.

“Oh word, did Kourt tell you this?” she wrote. “She sure wanna live that Kardashian life though, and BTW this photo shoot was our Christmas card. Family memories we were creating. Just tune in before you start acting like you know things.”

However, another follower seemed more on Kim’s side.

Even though Kim claimed Kourtney “doesn’t want to be a Kardashian anymore” in one of the episodes, Kourtney recently told E! News she’s “proud” to be a member of the famous family.

“I was watching that moment and I was like, ‘Are they talking about me?!'” she added.

Watch the season 15 premiere of Keeping Up With the Kardashians this Sunday at 9 p.m., only on E!