When Jonathan and Josh Baker’s feature-length debut, the imaginative sci-fi thriller “Kin,” unspools its final ten minutes, it comes packed with some genuine surprises. It’s not just that the film’s finale adds a new dimension to the story that has preceded it or that it opens up the possibility for a film franchise, but it’s who makes both of those things possible. It’s all thanks to a surprise cameo from one of Hollywood’s hottest actors, a star who doesn’t just appear in the film, but also executive produced it, totally in secret.

“This is a secret we’re trying to keep until opening weekend, and it’s already been real tough to do it,” Jonathan Baker told IndieWire in a recent interview.

Even fans of the film’s initial inspiration — the 2014 short film “Bag Man,” which the brothers wrote and directed — will likely be surprised by what happens. The bones of “Bag Man” are still very much in place: the film follows young Eli (newcomer Myles Truitt) after he finds an otherworldly weapon in a decrepit factory and is forced to go on the run with it, though the Bakers and co-screenwriter Daniel Casey added ex-con brother Jimmy (Jack Reynor), a kind father (Dennis Quaid), and a seriously scary drug lord (James Franco) to round out their feature.

The film’s conclusion only further opens up the world first envisioned by the Bakers, with Eli and Jimmy coming face to face with the extraterrestrial soldiers whose gun Eli has been trying to hide, tough humanoid figures who have been chasing the brothers across the country for days.

“We wanted to do something that was quiet, something that had a journey to it, but then also something that played with people’s expectations,” Josh Baker explained. “So then when we flip it at the end, and it goes in a very different direction that people are probably not expecting — and I think by that point, people are like, ‘Alright, let’s move this along, I know what that is.’ That was the main thing [we wanted to do].”

That “flip” isn’t just that the aliens finally show their faces or that they inform young Eli that he’s actually one of them, hidden on Earth to protect him during an intergalactic war (see? sequels), but that the main alien is played by Michael B. Jordan.

“People get to the end of the movie, thinking they know what this entire movie is, and then we show Killmonger from ‘Black Panther’! You just don’t expect that is happening,” Josh Baker said. 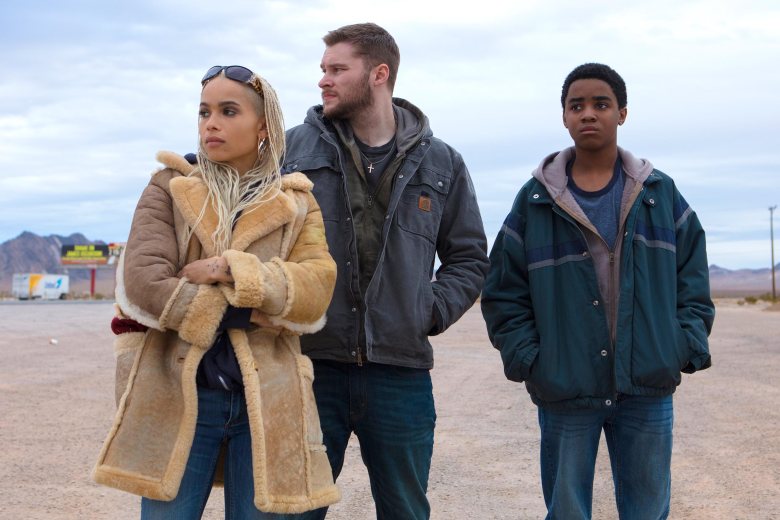 It’s not just Jordan’s cameo in the film that the Bakers have kept under wraps, it’s his producing credit too. “It’s one degree away from people assuming he’s in the movie,” Josh Baker said. “And I think that experience of the helmet coming up and you going, ‘What? Is that— ? What?’” Jonathan Baker cut in, “We’re trying to protect that experience as much as possible.”

It wasn’t easy, but the Bakers valued the impact of the twist enough to keep it quiet, even if it might have cost them the chance to build on the name recognition of the film’s biggest star. “While we’re making this movie, ‘Black Panther’ comes out, and the whole world just ignites,” Jonathan Baker said. “You have something that is now being talked about, and people want to lean into that … but we’ve always cared more about people’s experience being loyal to the original idea than financial gain or anything like that.”

Getting the “Avengers: Infinity War” and “Creed 2” star on board was apparently a matter of kismet.

“Michael is a sci-fi fan, and a fan of comic books, and a fan of cool, new, unique concepts, and a diverse cast,” Jonathan Baker said. “So, we’re kinda perfect for his tastes. He saw the short, ‘Bag Man,’ and he really liked it. He was already friends with our writer. So, one day, just suddenly a video pops up on our writer’s phone that Michael had sent him of him watching ‘Bag Man.’ You can see in the reflection of his laptop, Michael getting all excited about us flipping that car and the kid shooting the gun in the short, so Daniel Casey leans over to us and he says, ‘I think you’ve got a fan.’”

The Bakers, of course, acted fast. “We obviously immediately hooked up with Michael,” Jonathan Baker said. “It turns out, we’re all on a very similar page, in our taste level in cinema, also being comic book fans, a whole bunch of stuff. He basically said, ‘Hey, guys, it’s up to you, any way you want to use me, I’m ready to help you guys out with this.’ It became very logical to bring him on as an executive producer, and … other things that happen in the movie.”

Jordan’s interest in projects like “Kin” made him a natural fit for his dual roles, but the Bakers also wanted to ensure that the cameo wasn’t just a cheap gag, but one that added serious weight to Eli’s story.

“Think about who Eli is as a character,” Josh Baker said. “He’s never had that sense of belonging in where he is, so to drop on him at the end of the film that, not only is he being looked after in a sense, but this is pretty much your older brother, so you have blood somewhere else, even in another dimension. … That was really important for us, to make Eli go from someone who has never really felt connection to having this future. That’s wish fulfillment. The weapon is one thing, it’s more about, what’s next?”

“Kin” is now in theaters.