Outspoken Lady C was debating the idea of hiring a professional hugger for £30 per hour in order to boost workplace morale.

Appearing alongside Lady C, pro-cuddler Lindsay Meadows said: “Hugging relieves stress, depression, boosts the immune system – there’s all sorts of benefits that you get from hugging. It produces oxytocin and all those feel-good chemicals.

“Anytime you hug, it’s really important that you ask the person would you like a hug. Not everyone likes a hug and that’s fine. I think it comes down to whether they grew up with touch or not.” 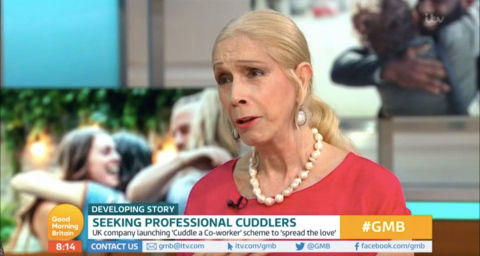 But Lady C had much harsher views on the idea, as she said: “Professional hugging skates very close to prostitution because the fact of the matter is, affection has got to be sincere, spontaneous, natural to be desirable.

“If it’s paid, if it’s professional, you’re getting very close to not only moral problems, but psychological problems. If people have a problem and need to be hugged, they can have their own arrangements with their colleagues.

Viewers were equally as shocked as Ranvir with Lady C’s blunt opinions and took to social media to share their reactions.