Loose Women‘s Nadia Sawalha clearly didn’t bank on her phone causing such a stir on the show today (September 21).

During one of the episode’s discussions, Andrea McLean interjected to reveal that her colleague was being texted live on air, after which Kaye Adams went under the table to retrieve the phone.

“Oh my god!” Kaye jokingly exclaimed after looking at the phone, with Nadia admitting that she herself was being “so unprofessional”.

However, as they tried to get back on topic, the phone went off once again and all the panellists descended into giggles.

“It’s my alarm, please just carry on,” Nadia said. “I am so mortified. All these years in the business… I’m distraught.”

Andrea then demanded that Nadia give over the phone, before revealing that producers were less than pleased. 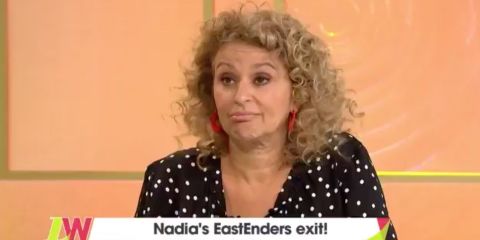 “I have had a voice in my ear – we are confiscating that in the break,” she said. “You are in such big trouble!”

However, others weren’t laughing quite so much, one disgruntled viewer saying: “Why’s Nadia acting mortified she shouldn’t of brought her phone to the set anyway.”