Last night’s (August 5) Love Island: The Reunion was ignited by an amazing cameo from Eamonn Holmes.

The This Morning co-presenter has some recent history with Laura Anderson, who appeared in the reality TV show and coupled up with Paul Knops. The contestant had previously admitted to fancying Eamonn, causing much hilarity among fellow Islanders.

As Caroline Flack interviewed Laura and Paul during last night’s broadcast, she awkwardly asked the former to explain the Eamonn situation.

“This has been blown up massively,” Laura reflected. “I just really love him, I think he’s such a cool guy. Basically, he was on one of my friend’s flights and I was so jealous that I wasn’t on that flight. I think he’s really handsome.”

Caroline then wondered what Eamonn would think of the whole thing, only to add: “Let’s ask him!”

With Laura stunned into silence, a video message from the This Morning set was played featuring the man himself. “Hello Laura, Eamonn here, but you knew that already,” he smirked.

“Thank you very much indeed for your lovely words, your sort of… admiration towards me really – you’ve made an old man very happy, I have to say. But talking about being happy, I’m happily married to the lovely Ruth [Langsford]. Well, I say lovely, she’s not lovely all the time… but that’s a whole other question.

“The big question is, could I be happier?” 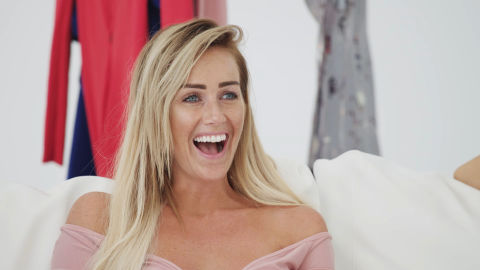 And with that, Ruth appeared to stop Eamonn in his mischievous tracks. She brilliantly stated: “What are you doing, are you cracking on with that Laura one? Are you? Because you know I’m loyal, babes. Don’t mug me off on here, right…”

Social media went into a frenzy following the clip, with many viewers calling it the standout moment of The Reunion. Well played, ITV.