If, as the cynical wisdom goes, "uglying up" is the way to an Oscar, then let's be blunt: Nicole Kidman should expect a nod come January for her latest gritty film role.

The actress, 51, is almost unrecognisable in a first-look image released for her new film Destroyer, sporting the unkempt, hard-living visage of a tortured undercover cop.

The film, by Karyn Kusama (Girlfight, The Invitation), stars Kidman as "rough around the edges" LAPD detective Erin Bell, struggling with the trauma of having been placed undercover with a Californian gang in her rookie years.

Distribution rights to Destroyer were snapped up by indie darling Annapurna Pictures at Cannes in May, and the film will have its premiere at the Toronto International Film Festival (TIFF) in September. 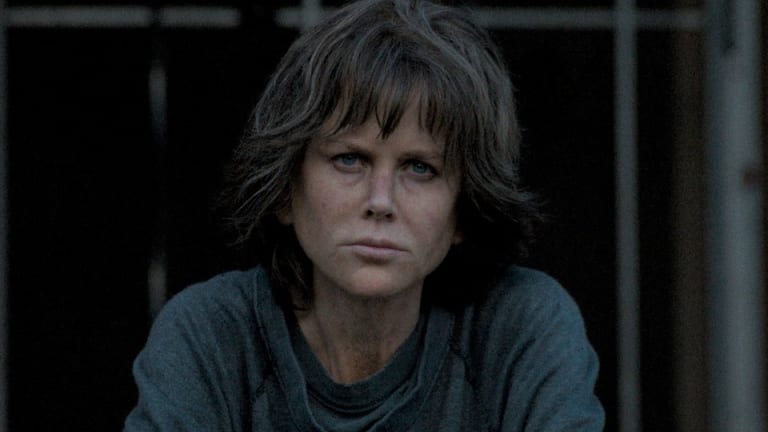 Kidman's startling appearance was made with "minimal prosthetics", Kusama told Vanity Fair, as the actress "hates being in the makeup chair".

"We always knew that what we wanted her to look like was a real middle-aged woman with a past that she wears on her face… With sun damage and sleep deprivation and stress and rage, just in her whole physical body," Kusama told the publication.

While the role might be a sudden shift from the comparative gloss of her Emmy-winning turn in Big Little Lies, Kidman has regularly gone through glaring transformations for her work, from donning a prosthetic nose in The Hours (it won her the Best Actress Oscar in 2003) to a tacky fake tan in Lee Daniels' The Paperboy.

"Nicole Kidman can be added to that list; her physical transformation here is extraordinary," the festival states.

Kidman, who will also be appearing in Joel Edgerton's Boy Erased, will be far from the only Australian presence at TIFF, with six local films selected for the festival including four feature films and two short films.

Among those are Hotel Mumbai, starring Dev Patel and Armie Hammer, which was partly filmed in South Australia by Adelaide director Anthony Maras. The thriller is based on the November 2008 terrorist attack at Mumbai's Taj Mahal Palace Hotel, which saw 31 people killed and over 200 hostages rescued.

The festival, which begins on September 6, is seen as a strong launching pad for films into the US market.

In recent years, Jocelyn Moorhouse's The Dressmaker (2015) and Warwick Thornton's Sweet Country (2017) earned buzz – and in Thornton's case, the festival's Platform Prize – from their screenings at the festival.