Jamie Fraser (played by Sam Heughan) and his family have links to France with the Highlander going to war with his friend Ian Murray (Steven Cree) before the events of Outlander. He also studied at the Université in Paris when he was 18 and lived with his wine merchant uncle Jared (Steven Cavanagh) – who is his cousin in the Starz series. Jamie can not only speak Gaelic, English and Latin but he can converse in French thanks to his time studying abroad as well as serving as a mercenary.

Why is the Fraser motto French?

Season two saw Jamie and Claire Fraser (Caitriona Balfe) flee to Paris while he healed from his horrific torture ordeal at the hands of Captain ‘Black Jack’ Randall (Tobias Menzies).

Additionally, Claire and Jamie hoped to thwart Bonnie Prince Charlie’s (Andrew Gower) ambitions for the Scottish throne, which would be disastrous for the nation.

However, the couple failed and the Battle of Culloden played out as the history books foretold with Scotland left decimated.

Outlander author Diana Gabaldon takes her cue from history when writing her novels and so she has taken the facts about the Fraser clan and incorporated them into her fictional work. 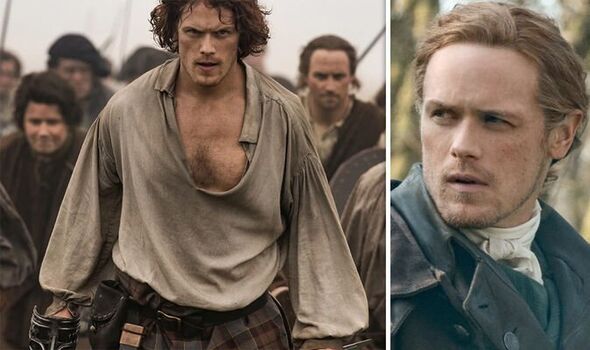 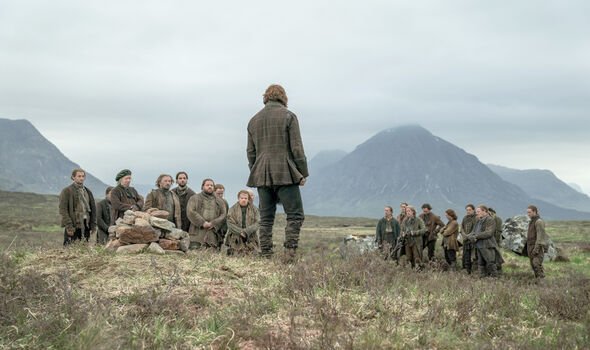 In real-life, the Fraser motto: “Je suis prest” translates to “I am ready” and is an old French spelling.

In fact, the motto features on the official logo of the real Clan Fraser website, which details the history of the family through the ages.

The motto is something Gabaldon has woven into Outlander with Jamie telling Claire in the novel Drums of Autumn about the Fraser coat of arms.

He says: “Strawberries ha’ always been the emblem of the clan – it’s what the name meant, to start with, when a Monsieur Fresiliere came across from France wi’ King William that was – and took hold of land in the Scottish mountains for his trouble.” 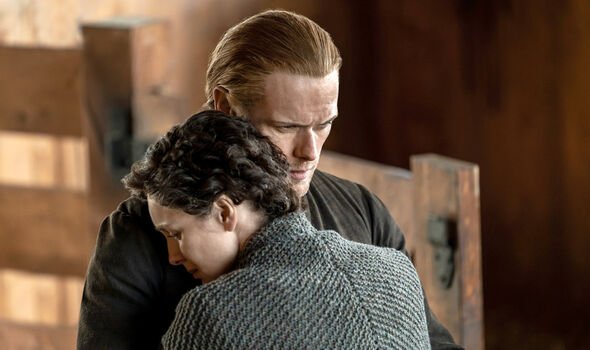 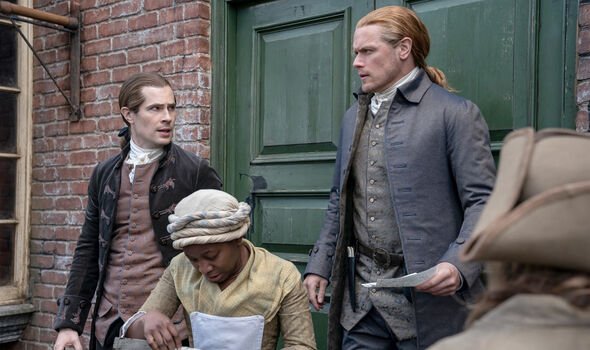 Gabaldon’s reference book The Outlandish Companion (1999) sheds further light on the links between Scotland and France in relation to Clan Fraser.

The Outlandish Companion states: “As with many of the ancient families, scribblers down through the centuries have been ever ready to establish invented or speculative origins for the Frasers.

“Some have stated categorically that the Scottish Frasers have derived their name from La Fresiliere in Anjou, France, while others have insisted that the name was accorded on a hot summer day when the King of France, thirsty from a day of hunting, was presented with a plate of succulent strawberries by one of his companions, who was immediately awarded with a coat of arms bearing three fraises and the command to take the name of Fraser as a surname.”

The site says the Frasers’ coat of arms comes from a strawberry plant but the “antiquity is unknown”.

Additionally, it says the claims Fraser is derived from a place in Anjou, France called La Frézelière are “attractive but they lack verifiable evidence”.

According to the official Clan Fraser site, the earliest written record of the Frasers in Scotland is in 1160 with Simon Fraser having lands in Keith, East Lothian.

The site goes on to state: “Though the name Fraser – however spelt – is French, it is now 800 years since the first bearer of it, Simon Fraser, is recorded in Scotland.”

Outlander fans are going to be learning a lot more about the Frasers after Starz confirmed it was making a prequel series focusing on Jamie’s parents Ellen MacKenzie and Brian Fraser.

The forthcoming series called Blood of My Blood will be written by Outlander showrunner Matthew B. Roberts with the show’s executive producers Maril Davis and Ronald D. Moore involved.

In a statement, Starz executive Kathryn Busby said: “Outlander is a riveting show that from season to season has captured the hearts of its fans around the world.

“We are excited to peel back the layers of this vibrant world to bring our audience the origin of where it all began. Matthew, Maril, and Ronald will continue to bring their excellent vision and creativity to this new iteration, and we can’t wait to see what happens next.”