Good Morning Britain hosted the latest from America as the United States election continued. Piers Morgan and Susanna Reid had a series of guests on the show, in between bringing viewers up to date with who will be the next President. Nigel Farage was on a live video link from stateside, and during his appearance, he clashed with Morgan over whether Donald Trump suggested bleach should be injected to cure coronavirus.

“During the pandemic there has been a number of disasters – and I said this to him the other day – and that’s one of the reasons we had a little falling out,” Morgan began.

“Because I just thought his whole strategy, for taking this whole of taking this so lightly, not dealing with it properly has now led to America having 220,000 deaths that the worth record by far for anywhere in the world.

“His refusal to mandate people to wear masks; to tell them from the podium to take it seriously, wear your mask, socially distance. All that kind of thing.

“His nonsensical cure theories like bleach and so on, all of that to me was woefully irresponsible,” he continued.

“We literally all heard it Nigel – what you talking about?” Morgan asked. 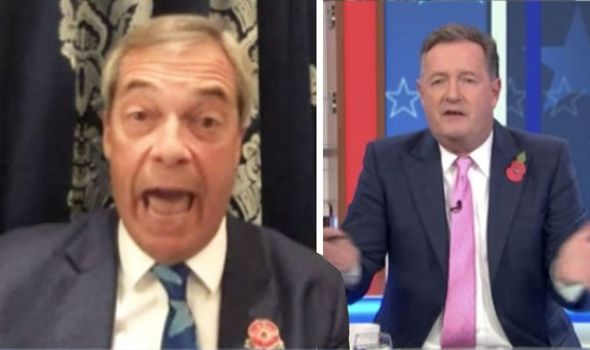 “Are you seriously telling me that he said bleach?” Farage asked for clarity.

“Do you not remember?” The GMB presenter replied.

“What? You don’t remember Donald Trump turning to his coronavirus expert and saying ‘you can now inject people with this stuff, bleach.’” Morgan stated.

“And on his handling of the crisis, he closed the flights, he stopped the flights coming in from China and countries carrying the virus while we continued an open door at Heathrow Airport. 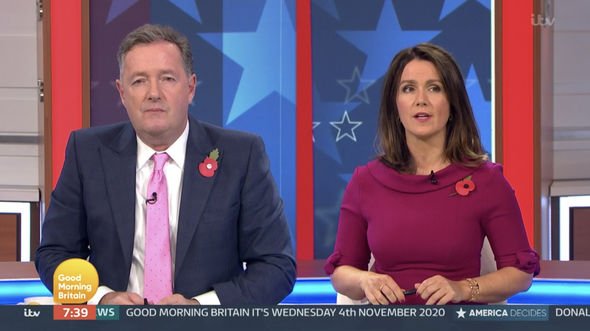 “Now, I’m not saying everything he said about this was right, but he did lockdown America, tried his best to stop the virus from coming in.

“We now have better medical treatment, we also know that what lockdown does isn’t just bankrupt and ruin for the self-employed and sole traders, it doesn’t just damage mental health on a vast scale, it leads to huge domestic abuse, massive increases in suicide, but also in health terms, because lung cancer diagnoses is down 70 percent in the UK.”

Reid diverted the conversation off the UK’s handling of the coronavirus pandemic and back to what Trump said.

“You said bleach,” Farage argued and Morgan continued: “Bleach is-“

“Grow up!” The guest commented. “Stop being fake news. 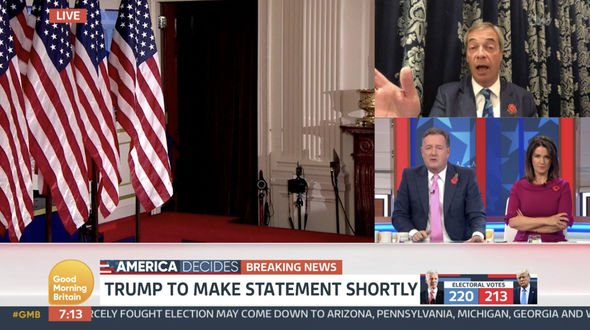 Morgan said he was simply reiterating what Trump said but Farage was on a roll: “Grow up! Stop being fake news.”

GMB then played a clip of Trump at said press conference where he made the comments about disinfectant and the presenters, viewers and Farage heard: “And then I see the disinfectant, where it knocks it out in one minute.

“And is there a way we can do something like that, by injection inside or almost a cleaning, because you see it gets in the lungs and it does a tremendous number on the lungs, so it’d be interesting to check that, so that you’re going to have to use medical doctors with, but it sounds interesting to me.”

“Have I made that up?” Morgan asked when the clip concluded and Farage said he had: “Yes…you are sinking to the gutter talking about bleach.”

“Donald Trump was talking about bleach,” the presenter remarked but Farage hit back: “I did not hear anyone mention bleach.”

ITV viewers then saw the two men argue over whether bleach could be classed as a disinfectant.

To conclude, Morgan asked for the final time: “Just to clarify one more time, you’re insistent the President never said -“

“I’m absolutely certain, he didn’t use the word bleach,” Farage replied and Morgan added: “Is bleach a disinfectant?”

“I’ve got better things to do than this,” Farage ended.

One said: “Farage…stop. Just stop!! You are digging a hole you can’t get out of!! #GMB @PiersMorgansSK well done you handled him well!!”

“Oh my god. What an absolute car crash #Farage #GMB,” another remarked.

Someone else mentioned: “@Nigel_Farage You are an utter W*****. A laughing stock. An embarrassment. #GMB.”

“Why are 2 grown men arguing over cleaning products, drink your teas and stfu #gmb,” a tweet read.

As for how the electoral votes have played out, Joe Biden is in the lead with 220 versus Trump’s 213.