Piers Morgan, 54, and his Good Morning Britain co-host Susanna Reid, 48, were joined by Jon Ashworth, 41, as they continued to quiz members of the main political parties about their policies to gain voters in the General Election next month. However, the interview ended up in a clash between the straight-talking host and MP as the Shadow Health Secretary defended Labour’s position on Brexit.

Leader of the opposition Jeremy Corbyn, 70, has voiced his views on the UK leaving the European Union on a number of occasions, believing a second referendum should be held.

If Labour were to win next month’s election, the parties manifesto states the public should have the vote on whether a new deal put together by Labour would be better than the Conservatives or whether the Brexit process stops altogether.

Speaking on the show today, Ashworth reiterated his parties stance on the matter, which left Morgan infuriated as he explained a vote has been made and should be adhered to.

As the pair clashed, the MP claimed Labour were following democracy, to which the host strongly disagreed. 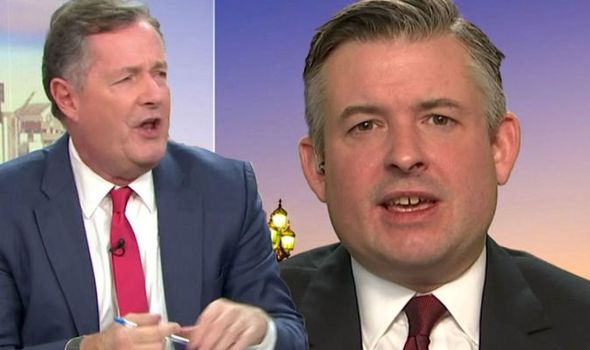 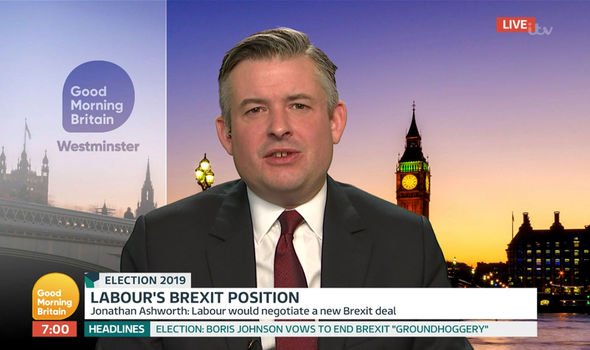 Morgan said: “Labour, who promised to respect the referendum in now plotting and planning to stop Brexit happening.

“You’ve just said if there was a second vote, and you were in government and called a second vote, you would actively campaign to stop Brexit happening.”

Ashworth replied: “We will actually negotiate a new deal which is in the interest of jobs and maintains the environmental safeguards, the workplace rights.” 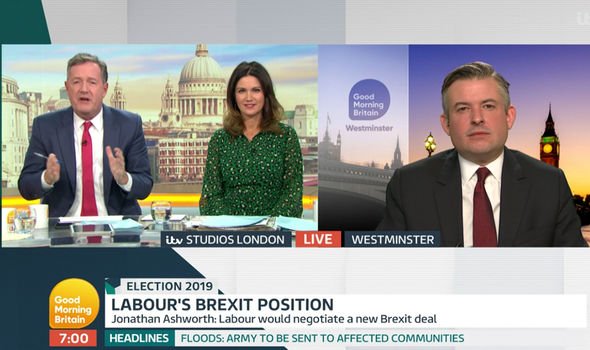 The MP continued: “We think it’ll actually be better for the NHS because we’ll have the smooth transition of medicine imports and exports at the borders.”

Reid asked: “Then you would campaign against it?”

Ashworth replied: “Then we would put that to the British people,” to which Reid interjected once more to ask: “And then you would campaign against it?”

Morgan interrupted and told the MP: “You’ve just said you would campaign to remain – you would apparently get a great deal even thought the EU would know all of you at the top of the Labour party wants to stay in the European Union, so what’s in it for them to give you a good new deal?

“Nothing,” the host declared as he then said: “It was a single question referendum – you have to respect the result of that referendum.”

“Labour wants to ignore that. That’s not democracy.”

Earlier in the interview, Reid asked Ashworth about the 14 point gap shown in the latest election polls with Conservatives leading at 42 per cent and Labour at 28 per cent.

“The Labour party is chasing the Tory party in this campaign and we’re doing that by putting forward sensible policies which improve the lives of the British people.

“Today, we’re announcing a huge, huge increase in the NHS budget so we don’t have people waiting so long.

“We had these stories [with] pictures of elderly people on trolleys in corridors at a hospital in Nottingham last week.

“Absolutely heartbreaking stuff. Four and a half million people on the waiting list. People with cancer waiting beyond two months for treatment.