Saturday Kitchen returned to BBC One this morning and it was Michelin star chef Glynn Purnell’s turn to host.

However, moments into the cookery show starting, those watching at home were left distracted by the presenters choice of shirt.

After introducing his guest chefs and resident sommelier Olly Smith, Glynn sat down with them on the table and commented on their choice of outfits collectively.

“Brilliant to see you! Floral and then neutral. I’m liking it,” before turning to his own choice of shirt and saying: “I’m trying my best here.  I feel like a [pacer] one of those sweets from the 80s!”

And he wasn’t the only one to notice, as viewers took to Twitter to discuss what they thought the pattern reminded them of.

One joked: “When you’re presenting #SaturdayKitchen at 10 but selling Fab lollies and 99’s in the park at Lunchtime.”

“I last saw that shirt design on a 1980’s pillowcase! #SaturdayKitchen,” another referenced whilst a third suggested: “On today’s show; a man wearing a shirt made from tea towels (sic).”

Meanwhile, several were also a little taken aback by his fast-paced presenting style.

It wasn’t just Glynn’s chopping skills that were fast, but also the way he spoke and whizzed around the kitchen.

“@Yummy_brummie needs to calm and slow down a bit! I think he must be nervous but he’s rushing too much! #SaturdayKitchen” A viewer remarked. 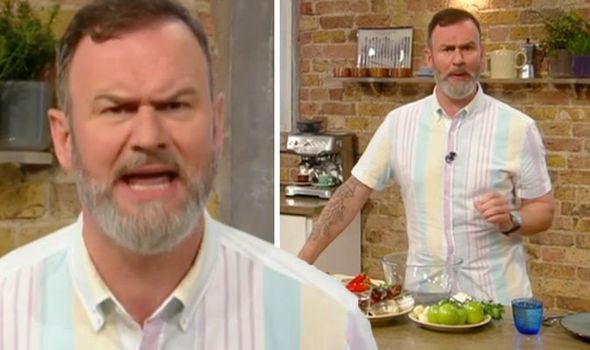 Someone else wrote: “The chef is talking so fast I can’t understand 1/2 of what he is saying #SaturdayKitchen.”

“Just doesn’t run as smoothly with this host #SaturdayKitchen,” one Tweeted.

It comes after last week’s show when several were left worried with guest chef Pam Brunton’s use of a mandolin slicer.

Chatting away with Matt Tebbutt, she was making a grilled squid dish and needed to slice mushrooms.

However, on several occasions she took her eye off the gadget to engage in conversation and those watching at home were nervous at how close her fingers were to the blade. 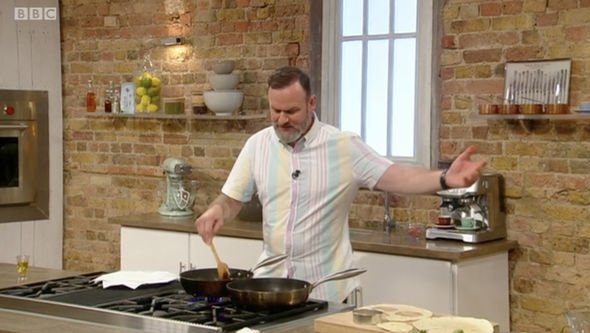 Nevertheless, ever the professional, the moment managed to past without injury.

Alongside that, Saturday Kitchen viewers saw Matt taken aback by one of his celebrity guests comment.

But when discussing dessert, many were surprised by the story associated with the dish.

Saturday Kitchen airs every Saturday morning at 10am on BBC One.