I can’t tell you I knew anything about the character known as She-Ra or her princesses of power. And, really, neither did “She-Ra and the Princesses of Power” creator Noelle Stevenson at the outset. Stevenson admitted she was born too early to engage with the headdress-wearing, cape-rocking Greek goddess, who became successful in her own right after being spun-off from the popular hero known as He-Man in 1985.

But despite never engaging with the property in the moment, Stevenson says She-Ra was “baked into the zeitgeist.” So when she started working on her first show, the animated “Wander Over Yonder,” she found herself working with a group of “Masters of the Universe” fans, putting this character, whom Stevenson only knew by name, into her orbit. The  place that it holds in our imaginations, even with people who didn’t grow up with it fascinated her, Stevenson told IndieWire. Upon finding out that DreamWorks was planning to reboot the franchise, Stevenson threw her hat in the ring.

It was a gamble that paid off as “She-Ra and the Princesses of Power,” which debuted on Netflix in 2018, will no doubt be taken into the hearts of a new generation of fans, both new and original (like myself). The story of Princess Adora (voiced by Aimee Carrero), her fellow Princesses of Power, and their determination to defeat the evil Lord Hordak has gone on a journey that no one could have expected.

Outside of the typical epic storyline of a massive army and the resistance fighters hellbent on stopping them, “She-Ra” has taken the time to examine relationships, both romantic and platonic. Its final season, airing earlier this year, took the giant risk of admitting that — for all the social media “shipping” — Adora and her best friend/moral enemy Catra (voiced by AJ Michalka) were actually in love with each other. “It’s a responsibility in my eyes [to] create media for children, for all ages, that shows these issues as normal,” she said. As a member of the LGBTQ community herself, Stevenson never wanted to present the relationship as something to be afraid of or “saved” from.

Cartoons like this didn’t exist when she was growing up, she explains, leaving her to latch onto characters that were coded as gay or lesbian. “They weren’t characters who were outwardly gay or lesbian,” Stevenson said. “It was characters where I projected onto them or latched onto them in a way I didn’t understand yet.” She says Velma from “Scooby Doo” was her first crush on a character but, as a child, she didn’t understand what that meant or how to approach it: “I just felt a kinship with her. I felt seen in some way.” 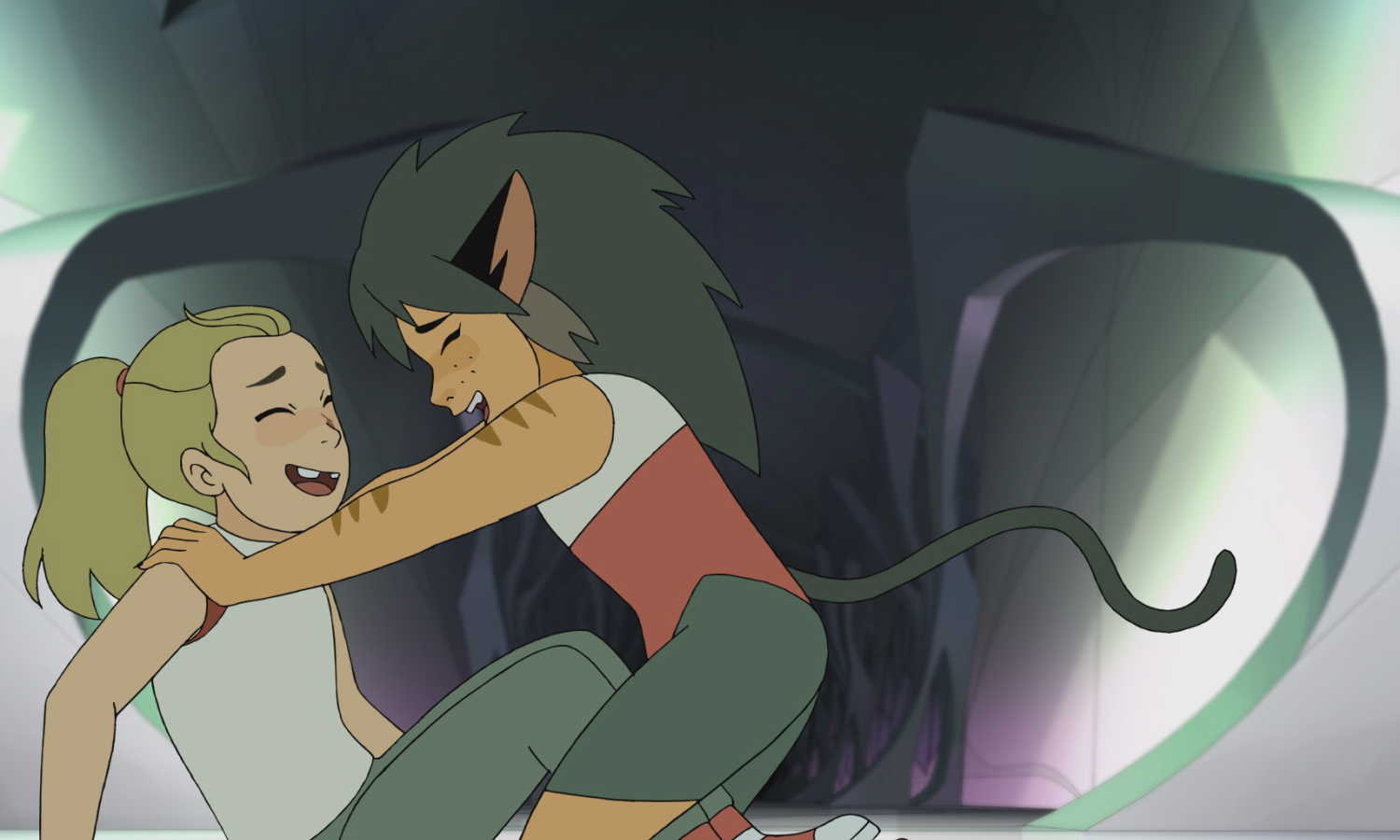 That sense of visibility affected how Catra and Adora’s relationship developed as Stevenson understands children test out the way they want to be seen through characters. “That’s a space that is very important for young people who are finding out who they are,” Stevenson said. “It would have been huge for me for [I] had had something that was very normal, very accepted, something that was shown as being aspirational and beautiful. I think I would have started to figure things out a lot earlier.”

But we live in a world where children are treated as pristine angels who don’t need to know about topics like sexuality right away, and Stevenson calls that ridiculous: “There’s nothing inappropriate about being gay and living your life. This is something we need to represent and show in as many different ways as possible.” Stevenson said she knew where she wanted the season to end but remained open to change and evolution. In the case of Catra and Adora’s relationship, Stevenson said she always knew the two were connected and had an intense chemistry, but that it was going to be a “big ask” to get DreamWorks to allow them to overtly state the pair were in love.

Talking to Stevenson, she had a dual duty when working on “She-Ra and the Princesses of Power” that she took extremely serious. Not only did she have to tell an LGBTQ-centric love story but also work with a canon that is beloved by fans. “There’s this version of ‘Masters of the Universe’ that only really exists in the minds and imaginations of people who grew up with it as kids,” Stevenson said. “It’s so sacrosanct and we’ll never going to be able to capture that feeling.” Stevenson did the long game, in terms of both playing with the established canon between Catra and Adora as well as building on the foundations the series had established in order to make the relationship feel like a natural endgame.

Alongside the significance of Adora and Catra’s love for each other, is the final season’s emphasis on reminding Adora that a grand sacrificial death doesn’t always make a hero. “We really glamorize and romanticize the grand sacrifice,” Stevenson said. The showrunner said she always wanted the series to have those serious beats, but remind audiences that even those in the middle of dire situations return home to the people who love, care, and need them.

“To be motivated by love is also to be motivated by individual love,” Stevenson said, and while it’s great to focus on sacrificing oneself for the greater good, the show wants to present a world where it isn’t selfish to want to live for others. “It’s a difficult story to tell because it goes against what our idea of heroism is, especially [for] women who are expected to sacrifice everything.”

“She-Ra and the Princesses of Power” is on Netflix.