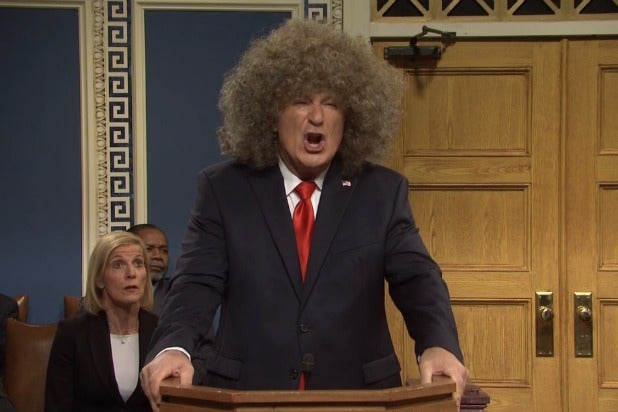 Alec Baldwin brought his Donald Trump impression back to “SNL” for the first time in 2020 for a cold open sketch focusing on Trump’s impeachment trial, such that it was, in the Senate this week. Except this time we got a twist, a la the “Days of Our Lives” parody from earlier this season. Except this time, we got “The Trial You Wish Had Happened.”

The big twist here is that John Roberts is out as the presiding judge, replaced instead by “SNL” regular Kenan Thompson as Judge Mathis. Yes, the Judge Mathis from TV.

The sketch then spent the next eight minutes running rapid fire through a series of witnesses, with several of the usual suspects appearing: Kate McKinnon as Lindsay Graham, Beck Bennett as Mitch McConnell, and Cecily Strong as John Bolton.

After a series of sycophantic remarks from the Republicans — McConnell’s “All men are innocent after proven guilty” being the highlight — “SNL” cast member Pete Davidson popped up as Hunter Biden, who rolled into the courtroom riding a hoverboard to make some jokes about nepotism.

Then McConnell and Graham came back in to plug coal and guns with some radio-style endorsements — “You can’t watch the Super Bowl without guns,” McKinnon’s Graham declared.

When Baldwin finally appeared as Trump about halfway through the sketch, he was sporting a walker like Harvey Weinstein has been doing at his own trial. Judge Mathis noticed what Trump was doing — especially after doing a spiel about being an frail old man — and demanded to know, “Are you trying to Weinstein me right now?”

After a brief segue with Mathis calling his cousin Vinny to the stand, with some non-sequitur jokes from the movie “My Cousin Vinny” thrown in, “SNL” cut back to Trump only to find him wearing the most ludicrous Phil Spector wig.