Home » TV & Movies » So, What Just Happened in the Westworld Season 3 Premiere?

WARNING: Spoilers for Westworld Season 3 ahead.

Westworld returned for its third season tonight, showing us just what happens when robots enter the real world. With Dolores and other hosts stepping out into human society for the first time, what could possibly go wrong? Read ahead for a breakdown of the episode.

Dolores breaks into the home of a wealthy man, Jerry, with some sort of stake in Delos, the company that runs Westworld and other theme parks. He had his bachelor party in the park and first met Dolores there. Dolores manipulates him by forcing him to wear a pair of glasses loaded with haunting memories of his previous wife, which she found in his “book,” loaded with all of his data, in the Forge. Oh, and she took his money while he was asleep.

Jerry worked at a company called Incite and retired early, but kept some confidential files, which he eventually hands over to Dolores. She teases her plan, “an origin of a new species,” as she leaves. Jerry dies trying to kill her.

His character, Caleb, is a construction worker collaborating with robots in the real world, in the year 2058. He’s also an army veteran with an old friend named Francis, played by Kid Cudi, who keeps calling him, but Caleb keeps ignoring his calls. His mother, who is bedridden, doesn’t remember him.

He’s struggling to land a different job, so to make extra cash, he participates in a program called Rico, a game-like app where players join dangerous missions to make money. Ash (Lena Waithe) and Giggles (Marshawn Lynch) team up with him for the latest project: blowing up an ATM and stealing the money.

At the end of the episode we learn the real Francis died, and that the calls Caleb keeps getting are a sort of a tele-therapy subscription service using Francis’s voice for familiarity. Desperate for a real connection, Caleb unsubscribes from the program. 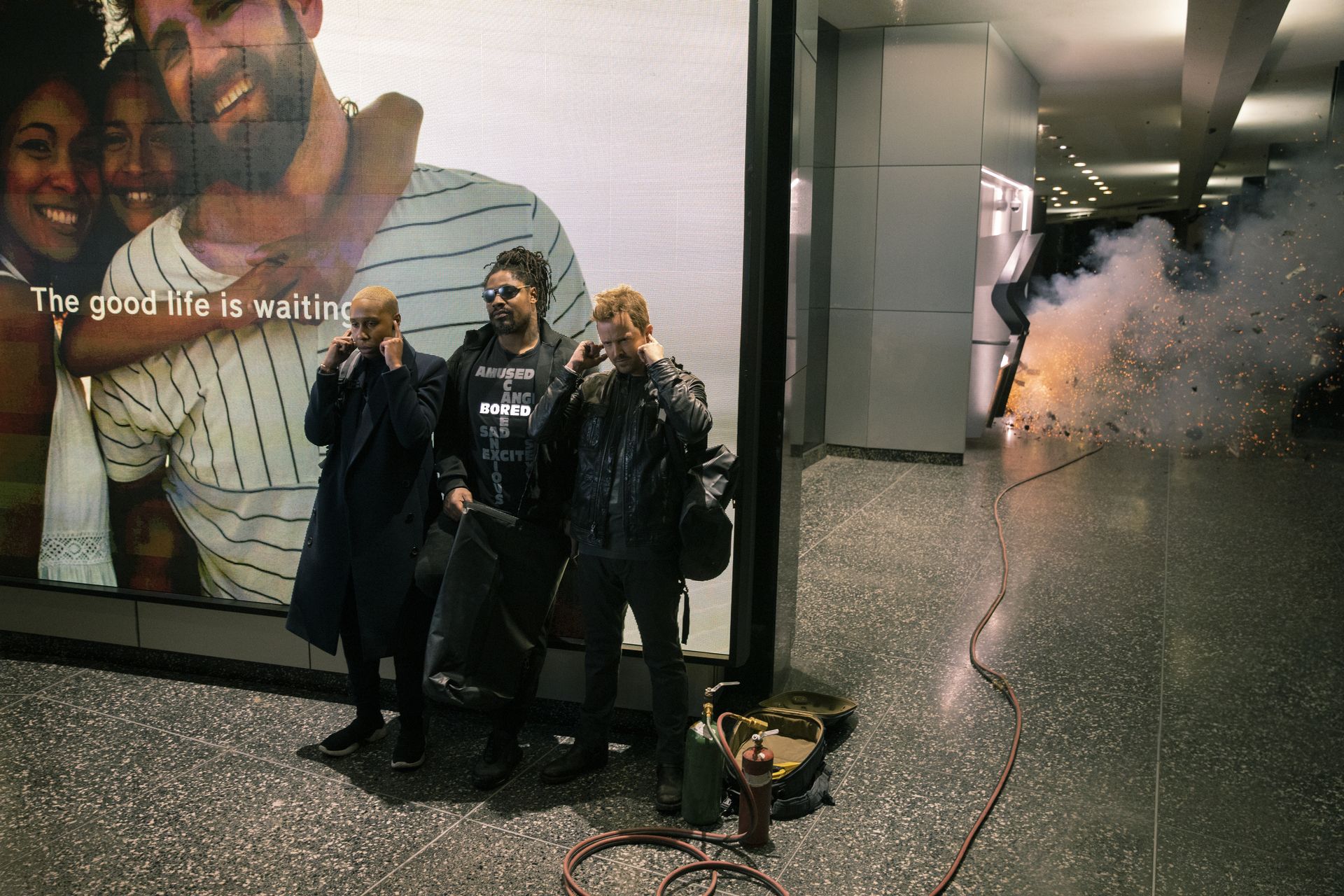 Charlotte is facing a PR crisis.

It’s been three months since the chaos of the host uprising, led by Dolores, where Westworld founder Robert Ford (Anthony Hopkins) and many board members died. As is pointed out in a Delos board meeting, the company has a very bad rep at the moment, but Charlotte is banking on the frenzy to die down. She wants to take the company private, but a board member implies that as interim CEO, Charlotte may have to consult William (AKA the Man in Black) first. But apparently, William appointed a machine as his shareholder proxy and the algorithm agrees with Charlotte, so her word goes. She also blames Bernard for starting the massacre and killing Ford.

Also, considering what happened in the Season 2 finale, it’s unclear if Dolores’s consciousness is still in Charlotte’s body.

Bernard has a new name now.

Bernard is laying low, wearing suspenders, working at a meat farm, and going by the name Armand Delgado. Using a special button, he self-analyzes to check in on his own host system on matters like, whether anyone has altered his code (no one has) and when he last saw Dolores (over 92 days ago).

Bernard, however, is a wanted man. Two butchers find him out and intend to turn him in for a reward. But Bernard goes full robot mode and kills them before they can take him. In the end, he takes a boat to Westworld, apparently from Palawan, Philippines, according to a sign in the background.

Dolores has an alias and a tech bro boyfriend.

Dolores, now going by Lara Espen, attends a fancy celebration in the U.K. honoring her new beau, Liam Dempsey, head of the tech company Incite. (Ironically, one of his friends ponders, while high, “What if we’re living in a simulation?”)

Liam takes Dolores back to Los Angeles, where he shows her a massive spherical mechanism called Rehoboam, owned by his A.I. company Incite. The structure was made by his father, who was inspired to chart a course for every individual person to “make the world a better place.” 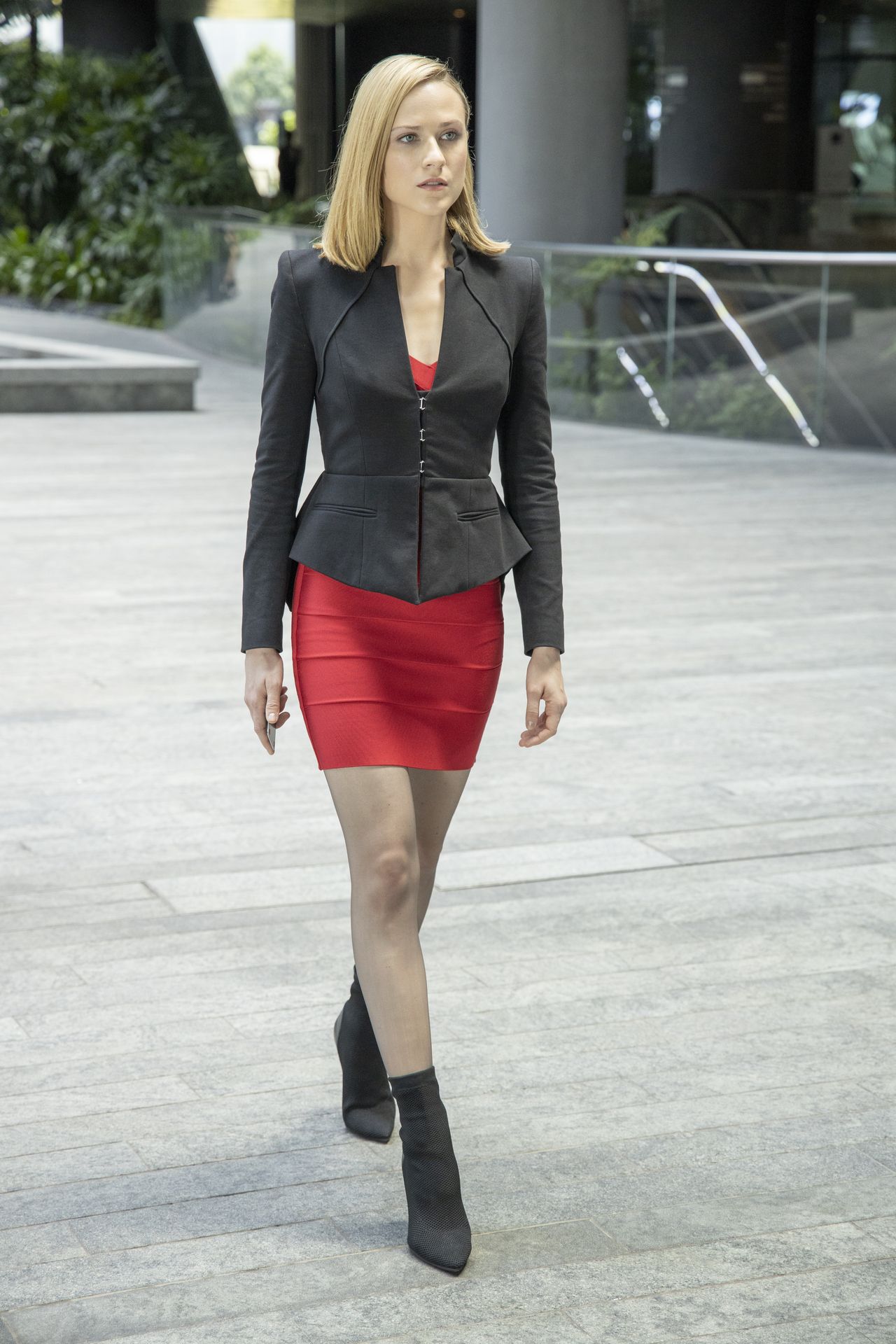 Liam gets pulled into a private meeting, but Dolores spies on him. He’s told that there’s been “turbulence in the data;” someone has access to or is interfering with Rehoboam.

Alone with Dolores, Liam reveals that he sometimes wants to shut Rehoboam down, but he has no real control over it. He doesn’t even really know what the system is doing. After his father died, his partner locked Liam out of the system. Only the original architect of the program knows what it really does.

Liam’s associate Martin Connells attacks Dolores and knocks her out before Liam can reveal the full company secrets to her. Connells reveals that the real “Lara Espen” was a 12-year-old Ukrainian girl who died years ago. They don’t know who Dolores really is, though.

On his next Rico mission, Caleb drops off a package and car, coincidentally where Connells and the Incite guys land with an unconscious Dolores. While gathered at a sketchy underpass, a car arrives containing a single passenger: a clone of Connells. Dolores wakes up and kills them all. She chases down Connells and kills him too, but only after he reveals the real controller of Rehoboam, a man named Serac. With a clone of Connells, Dolores now has someone on the inside at Incite. She’s hurt from the crossfire, though, and limps into a tunnel where Caleb finds her and offers to help.

Let’s not forget about Maeve!

In the post-credits scene, she wakes up in full ’40s garb with a gun in hand. Walking around her apartment, she finds dead men and a man tied to a chair. Then she looks out the window and discovers she’s in a Delos theme park inspired by a Nazi-occupied European town.