Richard E Grant isn’t willing to tell us who he is playing in Star Wars: Episode IX, but he has revealed who he isn’t playing!

The actor was one of the newest additions to the cast of director J.J. Abrams’ sequel announced last month, joining franchise veterans Mark Hamill, Billy Dee Williams, Daisy Ridley and John Boyega as production got underway.

Some fans got their hopes up that Grant would be playing a character from Star Wars spin-off media called Grand Admiral Thrawn, who was introduced in the 1991 novel Heir to the Empire. Grant himself even liked a tweet suggesting as much. 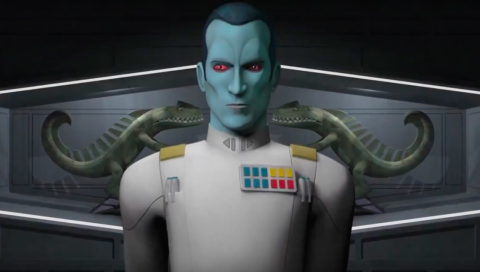 This ruthless leader of The Empire has gained a huge cult following, and made the jump onto the small screen in Star Wars Rebels, with Sherlock‘s Lars Mikkelsen doing some very haunting voice acting in the role.

Unfortunately, it looks like Grant won’t be playing him in live-action. Richard E Grant couldn’t tell the Radio Times much about his involvement in Star Wars Episode IX, other than that he’s most definitely not playing Thrawn.

“I’m not playing the Star Wars character you just mentioned,” he told the publication. “I’m not allowed to tell you anything. Otherwise I would be fired.

“It’s a complete lockdown on any information whatsoever.”

On the bright side, Abrams and Lucasfilm have confirmed that General Leia Organa will be featured in Episode IX through the use of deleted scenes shot for The Force Awakens and The Last Jedi.