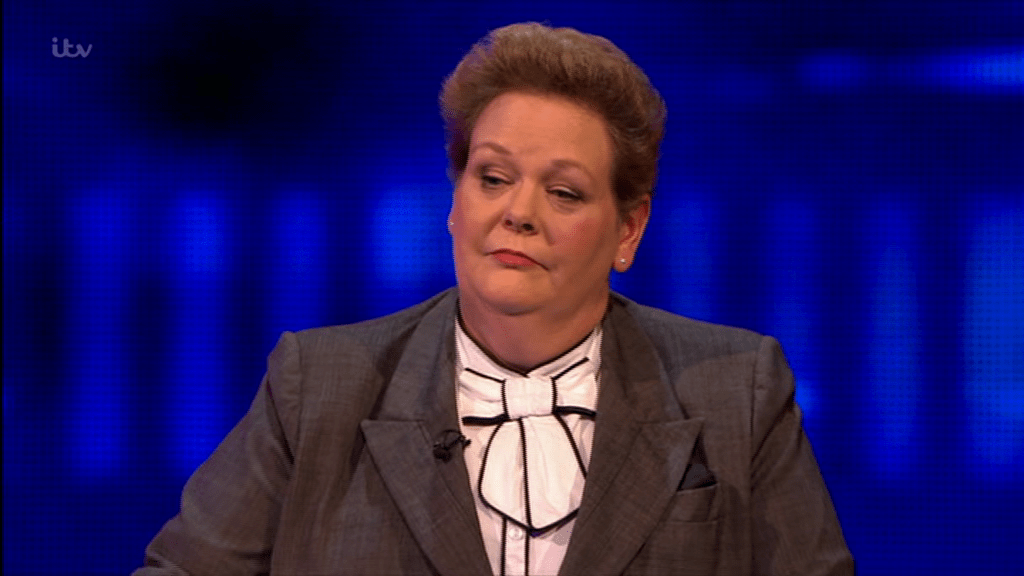 The question asked was about which author came up with the characters The Skittles – with the answer being Enid Blyton.

But the Governess didn't know the answer, which gave today's team the lead.

They ended up beating Anne, and scooping the jackpot of £17,000.

Fans immediately took to Twitter to express their shock, with this one tweeting: "Shame Anne.. you need to read more Blyton!" While this one was pleased for the team: "Well done team, especially Katy"

Another tweeted: "Edge of your seat end to #TheChase there! Buzzed for ‘em."

But it was how gracious she accepted defeat that viewers were most impressed with.

She even quipped that Enid Blyton would "come back to haunt" her. This fan tweeted: "I love Anne, good sense of humour & gracious in defeat."

Anne has always been a fan favourite since joining The Chase in 2010.

She is a competitive quizzer who has also appeared on Mastermind twice and reached the semi-finals of BBC quiz spin-off show Are You An Egghead in 2008.

Anne has also starred on Brain of Britain, and in 2017 was ranked in 65th place in the World Quizzing Championships.

However, she is best known for appearing as one of the chasers on the much-loved ITV daytime quiz show The Chase in the fearsome guise of The Governess.

The quiz boffin chose the nickname herself over the original suggestion "The Headmistress" as she claimed it was "more kinky", and also appears on the programme's Australian version.

Her steely demeanour and withering putdowns of hapless contestants have earned Anne the nickname "Frosty Knickers" on the show.