The Handmaid’s Tale season two came to an end tonight (August 12) and fans were left exhausted by an extremely stressful finale.

The episode saw June (Elisabeth Moss) frustratingly turn down the chance to finally escape Gilead, leaving her newborn daughter with a traumatised Emily (Alexis Bledel) as she headed straight back to Gilead. 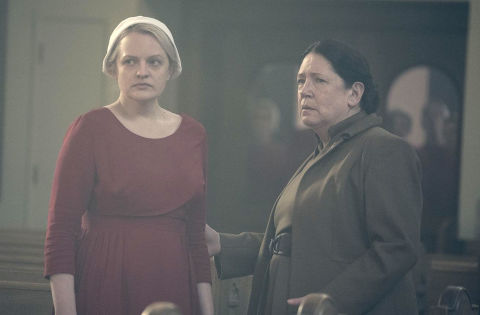 It was far from a satisfying ending for viewers, who had spent the entirety of the episode on the edge of their seats.

“I can’t take much more of The Handmaid’s Tale,” wrote one viewer. “It’s superbly acted, gripping etc but even in the midst of such a harrowing narrative I need some hope. I need it to be possible that something could make life better. Every week is a punch in the stomach.”

Another viewer wrote: “So was anyone else holding their breath during that sequence? So nerve-wracking!”

Another simply said: “I can’t cope with this.”

While the finale ended on a frustrating note, it’s important to remember that June still has another daughter in Gilead that she needs to rescue – Hannah.

And, as showrunner Bruce Miller has clarified, that means we can expect a major fight in season 3, as June attempts to save Hannah, hurt Gilead and change the world.

The Handmaid’s Tale airs on Hulu in the US and Channel 4 in the UK.