IndieWire owes our readers an apology. Last week, in a moment of desperate optimism and/or extreme naïveté, this critic declared “Mile 22” was “far and away the worst summer movie of 2018.” And while that statement was true at the time (and crucially, made an exception for Dinesh D’Souza’s “Death of a Nation”), it failed to account for the unfathomable awfulness that one of the season’s final studio offerings had in store.

I foolishly assumed an incoherent and jingoistic Mark Wahlberg vehicle that climaxes with someone telling him to “say hi to your mother for me” would be the most eye-punishing, soul-crushing, career-questioning thing I’d have to sit through until at least after Labor Day. And then, I saw “The Happytime Murders.”

An admirably debased but deeply unfunny Muppet noir that opens with a porn-addicted bunny getting his head blown off, it peaks with a Robert De Niro-inspired puppet ejaculating silly string all over his office, and presumably ends with a post-credit scene in which all of the actors fire their agents (full disclosure: I fled the theater during the blooper reel).

The deformed brainchild of Brian Henson (the actual child of The Muppets creator Jim Henson), “The Happytime Murders” is essentially what might happen if “Sesame Street” hired a super-horny 13-year-old boy to remake Otto Preminger’s “Laura,” and then forced him to write a script with MadLibs instead of Final Draft. Instead, “Sesame Street” sued STX Entertainment for invoking the show in its ads for this movie. They lost that battle, and now the suffering is ours to bear.

Our guide through this ultra-derivative world is private investigator Phil Philips (voiced and operated by long-time Muppeteer Bill Barretta), a weary has-been who’s blue in more ways than one. A puppet who looks like Peter Falk in “Wings of Desire,” sounds like Robert De Niro in “Heat,” and orgasms like Peter North in “Anal Addicts 18,” Phil has done more than anyone to ensure that his kind are treated like second-class citizens. Back when he was a detective, puppets were making inroads to society — Phil’s brother even starred on a show called “The Happytime Gang,” the first network sitcom that featured a majority puppet cast. But then our hard-luck hero failed to shoot a felt criminal, his superiors became convinced that puppets were incapable of policing their own, and Phil was kicked out of the force. Now someone is knocking off the surviving cast members of “The Happytime Gang,” and Phil has to patch things up with his old partner to solve the killings. Mercifully, it only takes them about 85 minutes to do it. 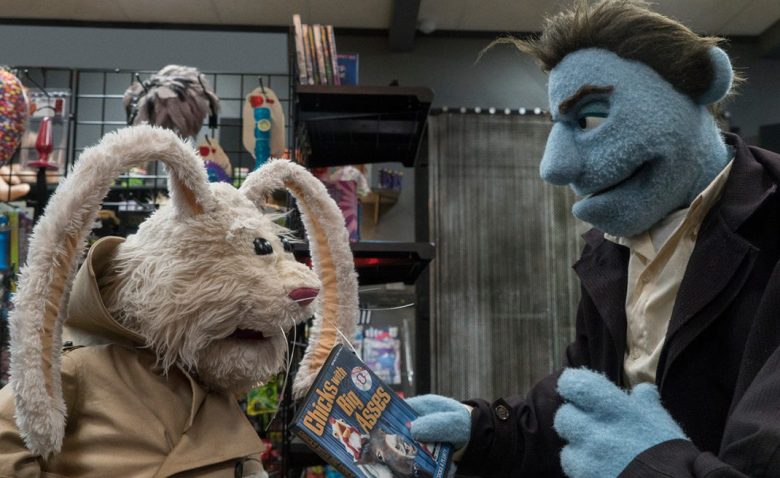 It’s easy to see why Melissa McCarthy wanted play Detective Connie Edwards. She can do the potty-mouthed cop shtick in her sleep, and there’s something intrinsically fun about subverting childhood iconography; just two summers ago, Seth Rogen fronted an R-rated mega-hit about cartoon food items who kill God and celebrate with a massive orgy. However, as written by Todd Berger (whose delightful 2012 apocalypse comedy “It’s a Disaster” augurs a better future), “The Happytime Murders” is a grueling death march of lame jokes and lazy story beats in which a nymphomaniac femme fatale introduces herself as “a sexual I’ma.” As in: “I’ma have sex with you on that table,” or whatever. Pause for laughter. See, it’s funny because the character says dirty things even though she looks like a preschool classroom’s teaching prop. Get it? If you don’t, the movie has 50 more gags just like it. The following scene features an octopus using its tentacles to pleasure a cow by jerking off eight of her teats at once.

Henson, who hasn’t helmed a feature since 1996’s “Muppet Treasure Island,” struggles to offset the way that slow puppet movements tend to mess with comic timing. “The Happytime Murders” is inflated with so much dead air that you might find yourself desperate for awful jokes to fill the uncomfortable silences. What happened to that dog who dominated his human master with a leather whip? Can we cut back to him? Anything would be better than having to watch talented actors like Joel McHale and Elizabeth Banks make the best of this wretched material.

It’s an incredible testament to the great Maya Rudolph that she almost rises above it, playing Phil’s lovelorn secretary with enough doe-eyed sass to save a few of her scenes. After all those years at “SNL,” she’s an absolute master at rescuing laughs from overlong sketches that run themselves into the ground — she does more with a lock-pick and a banana in this movie than Henson accomplishes with 50 hypersexual puppets and all the hand-sewn vulvas an R-rating can buy. Oh yeah, you’re not getting out of this without a few extreme close-ups of some puppet vagina.

For a film that revolves around cut-rate “Sesame Street” rejects dropping f-bombs every 10 seconds, Henson’s latest is stupefyingly risk-averse, as though its greatest aspiration were to trigger those unsuspecting parents who bought tickets for their kids. Not only is this movie derivative in every detail, it’s also saddled with the precedent of other, grosser, edgier movies that worked miracles from a similar premise — movies that had more on their minds, and were the funnier for it.