London, apparently (surprisingly?), is the divorce capital of the world – at least, that's how screenwriter Abi Morgan heard a female lawyer describe London and it stuck with her. Combining this idea with her self-professed "fascination for other people's marriages", Morgan was inspired to use the world of the city's high-end divorce circuit as a backdrop for a drama exploring marriage, family and the legacy of divorce.

The Split is not a legal drama though, even though the ins and outs of several divorce proceedings are explored throughout the six episodes (these are the kinds of divorces that make the papers, not your average couple next door; the settlement offer seems to start at £10 million) and the series follows one, that of multimillionaire couple Goldie and Davey McKenzie (Meera Syal and Stephen Tompkinson) to the (extremely) bitter end, adding some drama outside of the Defoe family, who are at the drama's centre. 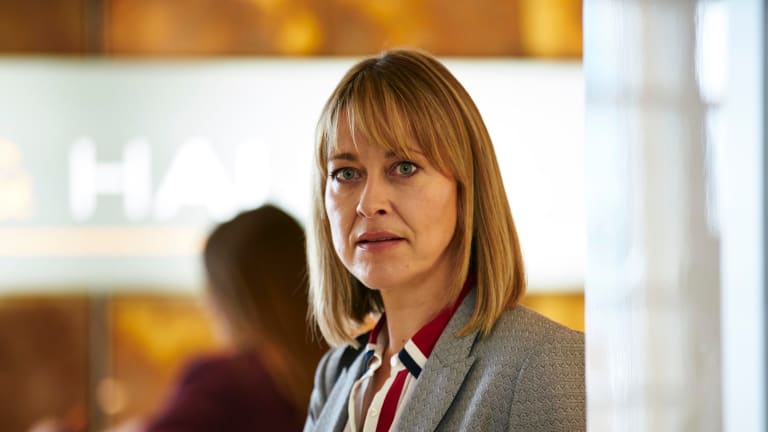 Nicola Walker stars as Hannah Defoe, a lawyer with a complicated life, in The Split.

The oldest of three sisters, Hannah is a divorce lawyer who, after being refused a promotion by her boss – who happens to be her mother, Ruth (Deborah Findlay) – leaves the family practice to work at a high-flying corporate rival firm (with astonishing views over the London skyline). Her younger sister Nina (Annabel Scholey), the family's "party girl", also works at the family firm, while Rose (Fiona Button), the youngest, is the only non-lawyer in the family; she's working as a nanny and about to be married to a man nobody – possibly not even Rose herself – is entirely fond of.

Hannah is married to fellow lawyer Nathan (Stephen Mangan), and they have three kids, but, having married young, have their own issues, which bubble to the surface when Hannah's new job sees her working with an old lover, Christie (Barry Atsma), with whom she had a final fling the night before her wedding.

Between this, and Hannah suddenly facing her own family as rivals in the courtroom, life is complicated – and then the sisters' estranged father Oscar (Anthony Head), who "went out for a paper" 30 years earlier and never returned, having run off with the girls' nanny, suddenly reappears. Oscar's return is discomfiting for all except Rose, too young to remember him leaving, and keen to get to know him. But over the course of the series, family secrets come to light that will change everything.

The Split is gloss and glam (everyone lives in fabulously large houses and dresses impeccably – but then, they're all presumably very well paid) and drew some flak when it screened in Britain for some nonsensical legal jargon, but at its heart are universal themes, about the personal choices we make, how events are shaped by the past and how the years affect our perspectives towards love and marriage; from Ruth's marriage to Oscar right down to Hannah's teenage daughter Liv (Elizabeth Roberts) exploring first love.

Well written and superbly acted, The Split surprises right until the end; the final episode will shock – and probably annoy – many with its messiness. A bit like life.