Love Island and Celebrity Big Brother have something of a friendly rivalry, with the latter making jokes last year about how they were getting absolutely defeated in the ratings.

Now they are crossing over, kind of. Love Island finalist Laura Anderson, who debuted a brand new haircut today (bye bye to those long extensions!), will be a guest panelist on tonight’s (August 21) Celebrity Big Brother’s Bit on the Side.

As the show’s official Twitter account revealed, Anderson will be appearing alongside former house Ricky Norwood, and Celebs Go Dating‘s Charlotte Dawson, who was at one point heavily rumoured to be a contestant on this year’s main series.

Charlotte is taking part in another Channel 5 reality show in Celebs on the Farm, which fans thoughts was absolutely hilarious and even more entertaining than CBB.

While this series of Celebrity Big Brother hasn’t gotten a lot of love so far, it has gathered a lot of controversy.

Ofcom have received about 1,000 complaints over ‘Human Ken Doll’ Rodrigo Alves, who has used the n-word twice in the house and asked fellow housemate Ben Jardine to get his penis out. 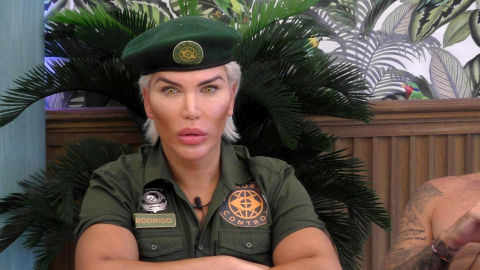 There’s also the whole thing over Stormy Daniels, who was meant to appear on the show but didn’t. She said that she dropped out due to a child custody issue.

Celebrity Big Brother airs every night on Channel 5, with Bit on the Side airing afterwards.