This Morning sparked a big debate on Twitter today (August 29) after airing a segment on whether adults should give their train seats up for children.

The whole discussion was originally initiated by LBC Radio presenter Shelagh Fogarty, who argued that fit and healthy youngsters should never be given a seat, especially on packed trains. 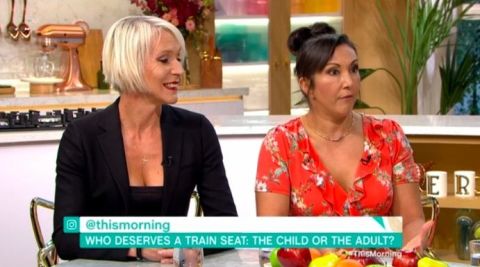 “My issue is not just that children shouldn’t stand, it depends on the age. I would generally say if someone’s 12-13 years of age and able-bodied then they’re more than capable of standing, so it’s just manners to offer the seat to someone less able to stand,” Nilufer said.

However, she argued that it was “just not safe” for toddlers to stand, and argued it was “good social etiquette” to teach toddlers to sit properly and behave.

While Eamonn agreed with the notion that children aged 5 and under should get a seat, Dawn hit back at the idea.

“I was brought up to respect my elders,” she revealed, saying that toddlers “can sit on your lap”.

“If you were standing in front of me holding your child, I would offer my seat to you, that’s the need of the people around you to sit down,” Dawn added.

Ruth then added a new dimension by asking whether a young adult or child has more right, with Nilufer noting that elderly people, disabled people and children get seats for safety reasons.

Dawn later remarked that under-5s went free, arguing the rules said that fee-paying passengers have priority, though Nilufer pointed out that elderly people go free too.

Eamonn then jokingly wrapped up the debate: “Could you two get out your seats, we need them for two more guests!”

However, Twitter was pretty animated by the whole thing, with viewers on both sides of the fence: